OIKONOMOS OF THE GREAT CHURCH
January 10


St. Marcian was born in Rome, but resided in Constantinople to the end of his life. He inherited great wealth from his parents, and spent it unstintingly on beautifying churches, giving charity and helping the poor.  He flourished during the reign of Emperor Marcian and Empress Pulcheria, having the same name as the Emperor.  He became a Priest in 453, and shortly after  his parents died, he inherited their  massive wealth but did not indulge himself. Instead he looked after the poor, becoming their benefactor,  abundantly supplying their many needs. He fed   the hungry  and clothed the naked.

Father Marcian was devoted toward the Holy Martyrs, and built or beautified their temples, one of them being  the extremely  beautiful church dedicated to St. Anastasia, deliverer from  potions.  His money flowed freely  to the poor and other charities as he also built this  magnificent church, with its splendid furnishings and decorations.  The Emperor Leo I and Verina were invited to celebrate the church’s consecration.  The clergy began their approach the Church as did Father Marcian, but he met a beggar seeking alms, which Father did not have with him.  He could not send the man away empty. So he took him aside and took off his main  garment and gave it to him, leaving the Saint with just an undershirt because he only wore a single garment.  As he was con-celebrating at the service, he wrapped his phelonion  tightly, so the priests would not see his partial nakedness. Then the wonder of it! The hierarch and the other clergy saw Father arrayed in a splendid garment of interwoven gold  shining forth like lightning. When he extended his hand to communicate the faithful, the divine fabric appeared more brilliant, so that no one could miss its radiance.

At another time a fire broke out in the north quarter of the city with flames roaring everywhere. The hungry flames  threatened the Church of St. Anastasia, and surrounded the saint when he arrived. Not a bit dismayed, with perfect faith and a clean heart before God he went to the roof of the Church holding his Gospel, and standing in the midst of the flames, he said the following: “Christ, God of our Fathers, who preserved safe and sound the Three servants in the Babylonian furnace, do you keep this house unharmed, which we built with much labor and desire. Let not the fire destroy it, lest the Arians should reproach us.  But do you perform a wonder even now, worthy of your magnanimity and goodness, for the glory of your name, and for the sake of us, your Orthodox servants, who have you as our exultation and our joy.” As he spoke tears poured forth from his eyes, as those standing below stood in amazement. From behind the flames, they saw a rushing force that swept away all fire from the church, leaving it unscathed.  Wondrous is God in His Saints!

In the Church of St. Anastasia of a feast day, a pregnant woman fell from an upper balcony to the marble floor below and expired immediately. This caused great wailing   and mourning for the woman and her unborn child. Then  St. Marcian  turned their weeping and mourning into joy. Raising his hands in prayer he urged the congregation to do the same, together begging God’s mercy. Then, O  the wonder of wonders, the pregnant woman was resurrected and the child leaped in her womb for joy!

St. Marcian, not only beautified so man churches, cared for multitudes of the poor and other works of charity, but he also gave funeral services for those whose bodies he would find. He was observed during the time in the funeral service at the time of the last kiss.  When St. Marcian spoke the words, the corpse  rose up and kissed him, then fell back asleep!

St. Marcian would go to prostitutes, offering them generous amounts of money lest they continue defiling themselves, due to their poverty.  On every Feast day he would assemble such women, whom he told to exercise continence for a number of days. He would then have them bathe, and the wonderful oikonomos brought them into the Church, and spoke to them sincerely of the punishments of everlasting perdition, that they came to repentance for their iniquities, and some of these women became nuns.

These are but a few of the many good works of St. Marcian the Oikonomos which he performed during His God-pleasing life. When He fell asleep, all the city came to his funeral, the Emperor and Patriarch and multitudes of his friends whom he had helped.

God is wonderful in His Saints!  Others to follow.

Posted by Unknown at 8:59 AM No comments:

THE DUTY OF CONFESSING CHRIST BEFORE MEN

THE  DUTY OF CONFESSING CHRIST BEFORE MEN 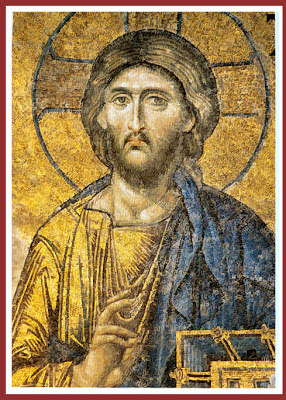 The duty of Confessing Christ before men is imposed on all of us directly by Christ, who says:

(Mat. 10:32-33)
Confessing Christ before men is necessarily  preceded by our personal conviction as to who He is, for without such knowledge our confession is limited. All of men’s behavior and actions are influenced by three things: Faith or religion, our  philosophy, and our political system.  Christ is our Great High Priest, the author and object of our Faith.  Christ is our Teacher and the subject and object of true philosophy.  Christ is our real political leader for He alone is King and robed in majesty.