OUR SACRED ORTHODOX CREED AND CONFESSION OF FAITH

OUR SACRED ORTHODOX CREED AND CONFESSION OF FAITH

I believe in one God, Father Almighty, Creator of heaven and earth, and of all things visible and invisible.
A common phrase about Orthodox, Roman Catholics, Jews and Moslems is "we all believe in the same God." However, this is not at all true. Orthodox Christians do not believe or worship the same God as others, for we do not believe in their God nor do they believe in our God. It is not possible for two gods to exist. We Orthodox confess the truth about the true God, revealed to us through Jesus Christ. We sing: "God is the Lord and has revealed himself to us. Blessed is He who comes in the name of the Lord."
God is correctly identified as we confess Him, Father, Son and Holy Spirit, for the Holy Trinity is three hypostases and one God. He is a Trinity remaining a Unity and a Unity remaining a Trinity. He is the Creator of everything that exists and nothing exists that He did not create. We also believe in His invisible kingdom, which though unseen with our eyes but is visible to our spirits. We clearly see the Holy Trinity and those who serve Him doing His will that is the Seraphim, Cherubim and Thrones, the Dominions, Powers and Authorities, and the Principalities, Archangels and Angels. We also are able to communicate with these powers from on high.


And in one Lord Jesus Christ, the only-begotten Son of God, begotten of the Father before all ages; 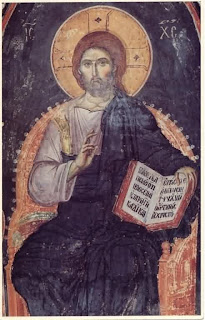 The Father is continually begetting the Logos who is begotten before the ages of time. The Only-begotten Son of God is always in the Father and the Father is in Him. The Father refers to the incarnate Logos as "my beloved Son," commanding us to "listen to Him!" The Father delights in His begetting His Logos and emitting His Spirit which is the life of God. He alone is the true and living God of who we confess in our Creed as being the one God. Those who worship a different God are not in communication with the Creator, for they do not communicate with the true God. Those who do not believe in the Holy Trinity, the source of all life, the fountain of joy and mercy, the living and acting God. Tragic are those who find a different God who is not God.