The Ever-Memorable Bishop Augustine (Kantiotes of Florina
by Matushka Constantina 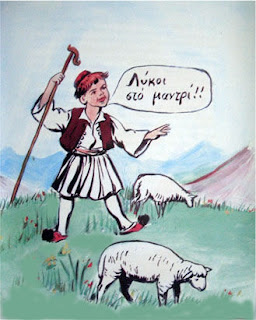 
"Wolves in the sheepfold!!"


A drawing by His Eminence of blessed memory, Augustinos of Florina.(Source)
New Heresies by +Metropolitan Augoustinos (Kantiotes) of Florina
"We will not deny you, beloved Orthodoxy" – Joseph Vryennios (St. Mark of Ephesus' spiritual father)
Of late, certain theologians, under the influence of contemporary, world-wide currents, have begun to savor the words "ecumenicity", "ecumenical spirit", and "ecumenical movement", as if they were hard-candy. Ecumenicity; what a beautiful word! And yet, behind these words, lay hidden a most fearful danger for Orthodoxy. What is this danger? We will show you by means of an example.
Imagine a woman, a woman faithful to her husband, a woman who will allow no third party to enter into their relationship, ever mindful of the promises which she had made before God and before men. She is a woman of exceptional beauty, drawing the eye of many a man. On account of her uprightness, however, anyone who dares to touch, or to proposition her, immediately meets with her anger. Should such a one persist, this honorable woman will deliver a strong slap to his face in order bring him to his senses.
Those men who are learned in this vile business, however, will try another method. These will try to uncover what it is that this woman likes; does she perhaps love poetry, or philosophy, or art? By means of these things the secret admirer will trap her.

THE MYSTERY OF THE EUCHARIST

THE MYSTERY OF THE EUCHARIST
"THIS DO IN REMEMBRANCE OF ME" 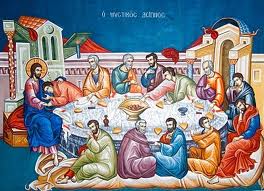 On the night in which He was betrayed, Jesus took bread and broke it and said to His disciples: "Take eat, this is my body, which is broken for you; this do in remembrance. Drink you of it all, for this is my blood in the new covenant which is shed for you and many for remission of sins."
"This do in remembrance of me!"
He that eats and drinks the body and blood of the Lord, will be unable to forget the Lord, but will continually remember Him for ever. Let us then consider what the nature of this remembrance is.

The Sweet Remembrance of Christ
The remembrance of Christ consists in thinking, what a person Christ must have been to have done such a work, and what a work, for our salvation! Thinking, that although being in the form of God, and enjoying all the power, authority, and glory of God, as being the perfect Logos of the perfect Mind, as the reflection of His glory, and although served and honored by all the angelic and bodiless forces, and master of all creation visible and invisible, He emptied himself, and became obedient unto death, even death on the Cross.

SIMPLE PROOFS OF OUR ALL-KNOWING GOD

SIMPLE PROOFS OF OUR 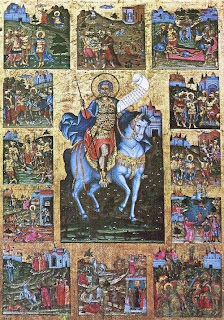 From our publication,"Cretan Saints" by Metropolitan Titus of Rethymnon, first translated then edited by Dr. George Christakis and Ralph Masterjohn (publisher of this blog). Page 150, "St. Menas the Great Martyr"

"In the heart of Heraklion in Crete stands the most magnificent church in the Balkans. It is the church that pious Cretans dedicated in their devotion to St. Menas the Egyptian whom they cherish as the patron saint of their city. This is not due to his origin, but rather to the assistance and protection he offered them. For the name Menas is an Egyptian name. The first Egyptian ruler was called Menas and there are seven Saints with the same name.

During the massive slaughter of the people of Crete in WW II, St. Menas rose and fought against the Turks, who could not quell the revolutionary spirit of the Cretans. This was strengthened on the Sunday of Pascha, April 18, 1826, an opportune time. A crowd of faithful Christians named as infidels by the Turks, where worshiping in the church of St. Menas during the Resurrection or Paschal Service.

The Church of St. Menas was then much smaller than the present church, as it was built during the Venetian rule and was known as the "small" Church of St. Menas. It is the very same church where the Turks slaughtered six Bishop of Crete and many clergy and laymen on June 24, 1821.

Heavily armed, the Turks surrounded the small church of St. Menas. According to a prearranged plan, they set fires and burned down the outlying suburbs of Heraklion. At the moment when Metropolitan Kallinikos was reading the Gospel of the Resurrection, the din and firing of their weapons was heard. The massacre of the Christians began. It was a critical hour for Crete. But a brilliant light appeared, and like lightning illuminated the church. White-haired and venerable, St. Menas came with sword in hand to save his people. His horse, securely bearing its rider, sped through the multitude. The Saint looked sympathetically on his people and reproached the pirates. He diffused tenderness and comfort inside the Church, and lightning bolts were hurled outside at the Turks who had defiled Christian Pascha and the sanctity of that Holy Day. The Turks fled terrified and protested to the governor because St. Menas had come to break up their planned slaughter. The Agha knew nothing of what happened, and the Turks finally realized it was St. Menas who wondrously protected the Christians.

Truly, the Saint saved the people of Heraklion. and nothing happened to anyone except for some women who had fallen and died in the midst of them, Of course the congregation fled in fear and terror, but with awe and admiration Metropolitan Kallinikos III of Anchialos completed the Liturgy by himself because even his deacon had deserted him.

On the following day, the Metropolitan confirmed this wonder in a festive manner. It is said that the Metropolitan visited the Turkish governor and thanked him for his supposed assistance by sending his officer Aghian Agha. The Governor assured him that he sent no agha. Thus the Turks themselves confirmed and proclaimed the wondrous intervention of Saint Menas.

Ever since this event, the marvelous and wonder presence of the Saint is celebrated by a synodical decree on Tuesday after Holy Pascha (in Bright Week). The relics of the Saint are venerated and a Liturgy is celebrated in the church of Saint. Menas. The faithful then light their candles during the reading of the Gospels an expression of gratitude because the Saint had saved them at that very hour. In fact since that time, in various areas of Crete, people light their candles during the Gospel reading.