WITHOUT FAITH NO ONE CAN BE SAVED


WITHOUT FAITH NO ONE CAN BE SAVED


When unbelief exists in a man, he  knows nothing of his true destination, why he exists, or that he is the image of God. Unbelief causes the  heart to be cold, lacking the inner warmth derived from genuine faith. The unbeliever becomes a victim and prisoner of the evil one, and though his body may be free, his soul languishes in unbelief. Lacking the ability to genuinely love, the only love he knows is self centered  which can deceive  him to see himself as a good person who does not harm anyone.  His mind is occupied with mundane things,  destitute of  the beauty and the joy of true faith.  Not drinking from the Orthodox fountain of youth and eternal life; the unbeliever  does not experience the delight of praising  the Theotokos and the Saints. He misses out on the joyful  sadness of praising the martyrs.  He has not seen the light of Christ, nor hear  His words of eternal life.  He has not  smelled the incense, or heard the melodious hymns of praise to our God and Savior. He has not felt the nearness of God because he turns his spiritual eyes away in unbelief. This causes him to be self- righteous.  His heart become smaller,  harder, and empty of faith, hope, and love  becomes filled with evil.  Thus, our Lord says: “For where your treasure is there will your heart be also” (Luke 12:34). “A good man out of the good treasure of the heart brings forth good things; an evil man out of the evil treasure brings forth evil things” (Mat. 12:35). 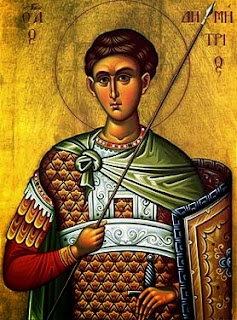 This glorious Saint, was fearless and victorious in confessing Christ as he strengthened and spread the Christian faith. Born of Christian parents in the third century after Christ, in Salonika, his father was a commander in the military under the emperor Maximilian. The emperor was filled with hatred and bitterness toward the Christian faith and he sought to exterminate it from the face of the earth. After his father departed from this life, the emperor appointed Demetrios to replace him as commander. Demetrios was well known and beloved for his good deeds and bravery in battle.


Despite the emperor’s animosity toward Christians, Demetrios whose soul lived in Christ, openly taught that man was made by God and that man was placed in Paradise to be happy and content. However the Devil deceived man with the purpose to have him disobey God and cause his condemnation and death. Thus, man believing the Devil, was exiled from beautiful Paradise. God, in order to save mankind, sent His Only-begotten Son to earth. Christ was born to the Ever-virgin Mary and He who was perfect God became perfect man. He was crucified and resurrected from the dead; He ascended into heaven and would come again to judge the living and the dead. This was the constantly repeated message of St. Demetrios. 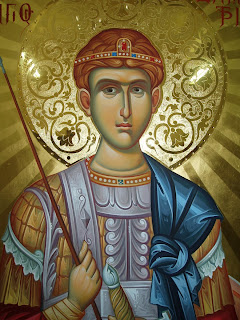 The Saint was successful; in bringing many to Christ and everlasting life, while at the same time arousing the fury of the enemies against the Saint. They saw Christianity becoming fruitful and increasing, caused them to decide that they would have to do something to stop blessed Demetrios. They decided that the best thing to do was to have him murdered. They soon found a method to accomplish their wicked task. The Emperor was returning from battle and on his way back to Rome he stopped at Salonika.