ORIGIN OF ORTHODOX
SIGNING THEIR CROSS 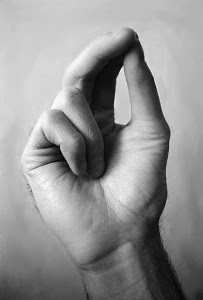 Introduced to Orthodoxy in the 4th century
by St. Meletios, Patriarch of Antioch

Orthodox Christians throughout the world, for almost 1700 years, have signed themselves with the Cross using thumb and next two fingers joined, with the other two fingers pressed against the palm; first to the forehead, then the navel, and to the right shoulder and the left. There is nothing in Holy Scripture or the sacred Canons that speaks of this practice of signing, which originally had been made with a single finger, as mentioned by St. John Chrysostom,  bearing witness to  the importance of oral tradition
It is good to always keep in mind that the way we sign ourselves with the Cross was introduced to the Church by our holy father, Saint Meletios, Archbishop of Antioch. The way this spread like lightning throughout the Church witnesses his divine inspiration. The Saint was well known for his sincerity and good attitude towards all men, always bearing a radiant countenance and friendly smile, attracting many people to him. He lived and preached the truth about Christ and our Faith, and his character was so outstanding that even the heretical Arians held him in high esteem. The Saint lived during a period when the Arians, who denied Christ’s divinity, were in a majority in Antioch. Erroneously thinking  Meletios to be like-minded with them and their heresy, the Arians cast their votes making him Patriarch of Antioch.  In their battles against truth, the Arians continuously aroused continuous turmoil.  Because of His pure Orthodoxy, the Saint was removed three times from the Archepiscopal throne, and driven into exile. His meek and humble nature radiated Christ from his countenance at all times. 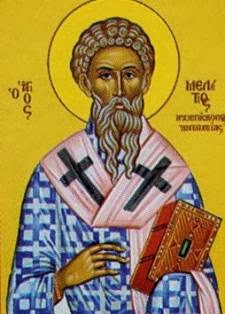 There were constant struggles between the Orthodox and heretics which at times became bitter. When St. Meletios was preaching of the essential Unity and of the Divine Trinity, his own deacon, who was a heretic, ran up and stopped the Bishop’s mouth with his hand. Then prevented him from speaking, St. Meletios raised his arm high, opened his three fingers to their full extent. Then closing his hand he raised his fist, showing the unity and the trinity. The deacon then, took his hand from the Saint’s mouth in order to hold back the Bishop’s hand which enabled St. Meletios to speak again.
Read more »
Posted by Unknown at 9:11 AM No comments:

SCIENTIST CLAIMS HE FOUND WHERE LIFE COMES FROM!

I found this on the net, and I have this to say. This all by itself cries out. Yes, there is a God with a mind that is infinite and he has a logos which all minds have, and a spirit of understanding that also makes it possible for you and I to understand. RJM