THE PERFECT MANHOOD OF JESUS CHRIST

THE
PERFECT MANHOOD
OF JESUS CHRIST In the tenth Kontakion of the Akathist to the Theotokos is the following verse on which this article is based.

“Willing to save the world, the Ruler of all came to it spontaneously.  And though as God He is our Shepherd, for us He appeared to us as a Man; and having called mankind by His own perfect Manhood, as God he hears Alleluia!”

“Called mankind by His own Perfect Manhood!”

The Lord would not appear before men unless He humbled himself to become like us, and became incarnate.  Being the highest God, he lowered himself, took on our nature and  became one of us, who originally came from the earth. This very close humble and wonderful intimacy of God with man was not only to set him free and bring him to salvation. This because the Lord’s will must be fulfilled which occurs when His purpose is accomplished.  In the beginning of the Bible  He clearly stated His final purpose  when He proclaimed the reason for creation, saying: “Let us create man in our own image according to our likeness.”

Jesus Christ, Son of  the Perfect Woman, the Virgin Mary, is that Perfect Man in the image and likeness of God. God’s desire is that all men become His perfect image and likeness.  He began with the creation of the first man Adam, in His own image but having the potential to also become His likeness.
Read more »
Posted by Unknown at 4:22 PM No comments:

Light is  necessary, so much that without it there would be no life.  Light helps us to move about in an orderly fashion, walking or in a vehicle.  Light enables us to buy and sell, to study and learn.  Light enables us to work and accomplish many tasks. It is beyond our ability to estimate light’s great value.  But the light that we see with our eyes is one kind of light. There are actually three types of light, physical, metaphysical, and moral.  We are all familiar with the first type of light, the second can best be understood thinking of our individual existence, for we are each conscious of who we are and have remained. This is metaphysical light the light of consciousness and awareness.

The least known and understood light is moral light. It shines forth into men’s souls through their consciences, and enters through awareness of their conscience as well as through the Bible, other people in the school system, government and church. All that we contact directly or indirectly are sources of knowledge.

The moral light of the world is Jesus Christ, promised to the Jews and accepted by many nations, His light is also unique in that it is a light that is immaterial, lighting up the mind and heart of man. A blind men derives no benefit from physical light which evades him. A spiritually blind man derives no benefit from the moral light which always seeks to shine in him.

Before Christ came into the world the nations were in deep darkness and often behaved more like beasts than men. They had the inner light of conscience but instead of seeking it, they responded with idolatry. There exists in  man the desire for something higher, better, superior, having knowledge which man lacks. Instead of using right reason, and seeking the true invisible God, by just addressing Him, they used their sinful imaginations and designed gods out of wood and stone. Then they bowed to their manufactured goods  and worshiped them as true gods.

But men did not do this alone, they responded to the invisible Devil and demonic powers who fooled men in this way. When they went to their manufactured gods and sought answers, demons would  speak and provide an answer, which caused delight to men and increased their belief in their gods. These gods who were actually demons, successfully drew them into fornication, adultery, lying, stealing, and every vice. And this satanic authority made imprisoned men, spreading misery and injustice to prevail everywhere.

After thousands of years, suddenly the following event took place  as expressed in this hymn:

From on high did you descend,
O Compassionate One;
And you did submit to the three-day burial;
That you might deliver us from passions,
O Lord our Life and Resurrection, glory to you!

Brighter than millions of suns, the Godman dwelled in the Virgin’s womb, was born and grew up, standing before men who saw him as: The true God who descended to free us from prison and save our souls. Other men who were evil and servants of the evil one, saw him as a malefactor not worthy of life and constantly sought every opportunity to extinguish this eternal who is God himself.

They slaughtered him by nailing Him to the Cross; the fools had no comprehension of  the enormity of the crime they were committing. They rejoiced at His suffering, mocked His apparent powerlessness, urging Him, if He were truly the Christ, to come down from the Cross and save himself. They knew what they were doing and every malicious bone in their bodies was energized to fulfill their evil intent. Again they did not see the trap that the Cross really was, and that this trap would snatch all authority from their cohorts the demons and their father the Devil. What did they accomplish by their work, of what gain was it to them?  They permanently cut themselves of from the Light of mankind, from the Fount of goodness and will inherit eternal death. 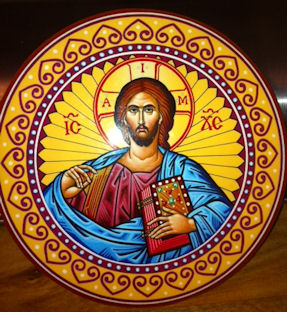 “I am the Light of the world, whoever follows me shall not walk in darkness, but shall have the light of life.”
Posted by Unknown at 6:47 PM No comments:

EVERYONE THAT DIES GOES TO HEAVEN!     WHY WORRY?


Concerning this title – this is a most important subject in our days for the idea that everyone goes to heaven was condemned as an  ancient heresy espoused by Origen, and condemned  by the Church Fathers at the Fifth Ecumenical Synod. Today this heresy is very much alive and permeates our society  and its advocates are often Patriarchs, Popes. Metropolitans,  Bishops and their followers, found especially among the ecumenists and philopapists. This heresy was known as the apokatasasis, or restoration. It advocates, it including Origen imagined salvation could not be found in terms of the rejoicing of the saved in heaven while those condemned were  suffering in Gehenna or Hell. How could we enjoy ourselves surrounded by so much misery? So, contradicting Jesus Christ, overthrowing His Gospel,  they embraced the false doctrine which establishes that in the end every creature will be restored and no one anywhere will be condemned to suffering; some went so far as to claim that this included the devil and demons. Simply, said, everyone that dies goes to heaven.   So why worry?.

Their false reasoning is their assertion that God being good can do no evil. The kindness and mercy of God is so great that He cannot stand to see anyone suffer. That this reasoning is wrong can be seen by the fact that God is not the villain who makes men evil.  For God is the source of everything good and only good can come from Him. The villain is the devil and his demons, who inspire men who become the suffering victims who did their will. Man is free and can choose what he wants, good or bad, virtue or vice. The freedom of man places full responsibility for evils squarely upon his shoulders.

Today in our “everything goes” societies, all agree that you must die, but no one knows of or remembers the teachings of the Fathers of the Church or Jesus Christ, and they are both ignored. So we hear when someone dies, may his or her soul rest in peace,  Indeed in our present society belief doesn’t  matter nor does sin offer a barrier to the kingdom of heaven , in people’s minds . Baptism is unnecessary and the church shows no useful purpose to  people. For everyone that dies goes to heaven.

Orthodox bishops go to funerals of prominent heretical bishops and pray that their souls be among the righteous, and so they pray for them. But they never approach theses false bishops to tell them the saving truths of Orthodoxy, and the necessity of them abandoning error and coming into the true Church, instead why worry?

What does this doctrine do? It overthrows all the teaching of Christ and calls the truth a lie. Jesus’ teaching is crystal clear, but the evil one always seeks to muddy the water so as to promote his own poisonous lies.
Read more »
Posted by Unknown at 6:32 PM No comments: