HOLY COMMUNION – THE EUCHARIST WITHOUT IT WE HAVE NO LIFE

HOLY COMMUNION – THE EUCHARIST
WITHOUT IT WE HAVE NO LIFE

The True Christ and the True Church  always have been and will be in harmonious agreement with each other being inseparable, because Christ remains the Head and the Church remains the Body of Christ. Only in the Orthodox Church is the great mystery of the Living Bread who came down from heaven preserved and made available to the faithful. For Christ took (not unleavened)  ‘leavened’ bread (Greek αρτος) and blessed it, and broke it and gave it to the disciples and said: “Take, eat, this is my body.  And He took the cup, and gave thanks, and gave it to them, saying: Drink you all of it’ for this is my blood of the New Covenant which is shed for many for the remission of sins” Matthew 26:25-28).

Among the many denominations we find the greatest distortion of Christ’s words in the Holy Bible concerning the subject of Holy Communion.  This distortion shows that it is not possible to interpret the Holy Bible outside the Church which is the source of these Scriptures, for outside the Church there is no interpretive guidance from the Holy Spirit.  So the denominations deny that Christ means what He clearly says, that the bread and wine offered really become the Body and Blood of Christ himself.  1. He does not say that the bread and wine “represent His body and blood.” 2. Nor did He take “azymes” or unleavened bread, but “artos” which is leavened bread.  3. Nor did He eat the Jewish Passover meal, which must be eaten standing and they were all sitting.

1. The words in English are clear: “this is my body” and the Greek τουτο εστι το σωμα μου.
The Greek word εστι translates as  “is”.

3. The Lord did not eat the Jewish Passover as some claim, but is now himself, the lamb of God, and is the New Pascha or Passover, offering , not the blood of  lambs, but himself as the Lamb of God, who will be sacrificed to the Father as He is lifts up (on the Cross)  the sins of the world.   Also in claiming that Jesus was celebrating the Jewish Passover, they show Him to Him who is alone without sin as being a sinner as a violator of the Passover. For Jesus and His disciples  were reclining, and if eating the Jewish Passover, they were breaking the law. Moses commanded that the Jews be standing when eating their Passover, with their boots on ready to “leave Egypt”. The Jewish Passover, would not arrive until sundown of the next day, Friday. For it says in the Bible, that they hurried to take down the body of the Lord “before Passover.”
Read more »
Posted by Unknown at 7:15 PM 1 comment:

WE ARE THE CHURCH!

WE ARE THE CHURCH! 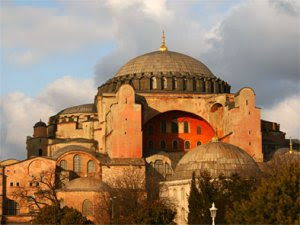 I am going to  Church or I went to Church, referring to the building is an inaccurate statement. We gather as the Church in the temple of God for the Church is not the building where we attend. The building itself is called in Greek: “ the na-os.” Which means “the temple”. The Church, which includes the gathering of the faithful believers is from the Greek “ecclessia”which is the gathering together of the faithful to hear the Gospel, and are of one mind and one heart with Christ and with each other.

But the Church in which we gather is not just what we see for there is much which remains unseen to physical eyes, but is seen by spiritual eyes. With our spiritual eyes the Church around us comes to life and this includes we who are bearers of Christ, also the angelic powers are  present and Jesus Christ is always present with us. For Christ is present in every member of the Church, and with the celebrating  Priest, who wearing royal robes, beseeches Christ for His grace on all of us. Being active the Church is always exciting and cannot be boring unless we are spiritually benumbed, dying or dead. But even if were in poor spiritual condition, the glorious and divine Church can enlighten and restore us to the vibrant life of the Church.