SAINT KATHERINE HOLY GREAT MARTYR AND ALL THOSE MARTYRED WITH HER

SAINT KATHERINE HOLY
GREAT MARTYR
AND ALL THOSE MARTYRED WITH HER

November 24, 25
THE ONE-HUNDRED FIFTY ORATORS
martyred by a fiery death.
THE EMPRESS FAUSTINA
PORPHYRIOS
with TWO HUNDRED SOLDIERS
slain by the sword 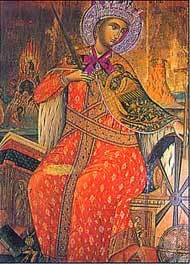 The wonderful and noble Katherine’s father was  King Constas, who reigned with his consort Sabinella and governed Alexandria in Egypt.  Possessing a most quick and clever mind, she became well educated in all the branches of Greek and Roman culture.  She thoroughly learned the art of rhetoric, and in a word, she was smart and proper, possessing  all the learning of the world. In fact she was the wonder of her age for she surpassed everyone. In addition to a wonderful mind she also possessed unrivaled perfection of body and form.  Being such an outstanding beauty, she was also filled with conceit and pride.

Numerous men had sought her hand in marriage, but Katherine refused all their proposals for  she considered them to be inferior to herself, saying: Who can be found as my superior or my equal in point of beauty, wealth, nobility and learning, so as to justify my accepting him as a husband?

Then one day she heard about Jesus Christ from a monk, and she was sure that she had found the bridegroom she was seeking, who was not only just her equal but in reality was incomparably better than her; in respect of beauty and pulchritude, and personal attractiveness, and in respect of wealth and nobility, and of learning and wisdom, Christ greatly surpassed her.  But she was quite unworthy of Him, as was revealed when she was sleeping and in a dream, she beheld the Theotokos who appeared carrying her Son, and urging  Him to look at Katherine.  He quickly turned His head  away, making it plain that He preferred not to gaze at her, for only a brief look had aroused His aversion, as though she was extremely ugly and badly formed.
Read more »
Posted by Unknown at 12:17 PM No comments:

I found this on the net, and I have this to say. This all by itself cries out. Yes, there is a God with a mind that is infinite and he has a logos which all minds have, and a spirit of understanding that also makes it possible for you and I to understand. RJM

THE THEOTOKOS AND EVER-VIRGIN MARY

THE THEOTOKOS AND
EVER-VIRGIN MARY

Jesus Christ, the Only-begotten Son of God,  is being eternally born of the God the Father, and in the fullness of time, without change,  He was born of His Mother, the Virgin Mary in Bethlehem of Judea, thus He also became the Son of man. Giving thought to these things and their meaning is astounding. The eternal Father in heaven has designated Mary to be the Mother of His Son in the flesh, being a most amazing event in history, for God the Father and Mary the Mother together have both given birth to Jesus Christ the Godman!

Therefore, the Theotokos, is now enthroned next to God the Father, having a special common bond, which He has and which she has acquired, for they are both the birthgivers of Jesus Christ. What an astounding and glorious woman she is! Christ is eternally being born of the Father before the ages and in time of His mother during the ages.

What else does this mean? That Mary, who gave birth to God, is henceforth called by the Church, the Theotokos, and because  she is  supremely honored and glorified by God, the Church also honors and supremely and glorifies her.
Read more »
Posted by Unknown at 6:44 PM No comments:

The Papacy  defines the Greek word “anathema”  as “accursed”, and this appears in dictionaries,  but it is not even close.  The meaning of the  word means something to “keep away from” as being dedicated  to either  God or  Satan, which we all must avoid completely (as defined by St. Nicodemos). An example is the Virgin for  being  dedicated to God, she is anathema as she belongs to God.  An anathema is placed on evil things or heretics and their false teaching, the warning is to  keep away. Whoever makes friends or brothers with those  anathematized will pick up their spiritual disease and fall under the anathema as well.

With no disrespect for our Orthodox leaders and theologians, but with love of truth, we offer these truths which are being trampled upon.  For some years there have been meetings between the Orthodox and Coptic Monophysites as well as the Roman Catholics or the Papacy. These meetings resulted in the following action. High ranking Orthodox leaders and the Papacy or Coptics, have boldly jointly announced to the "lifting of anathemas" against both of these groups, and the deceived Orthodox  then proclaim that the Coptic heresy and the Papacy have the  same belief as the Orthodox–which not only is false but is a betrayal of the true Orthodox Faith, denying the exclusivity of the Church Christ founded.

Jesus Christ is the Truth, the Love and the Wisdom of God.  Truth always remains the same, despite the many attacks by the Devil who is the father of lies.  Whenever Love is separated from Truth and Wisdom, it is not only a false and deceptive  love, but is dangerous and deadly to the soul.  To protect us from heresy the Church invokes the anathema. Further understanding of its real meaning occurred to me, the writer,  when I visited Kifisia in Greece,  I saw a huge sign across a large military building, and in huge letters, the word  ANATHEMA.  Later I found out the building contained munitions, so it was a warning like Danger Keep away.