The Papacy  defines the Greek word “anathema”  as “accursed”, and this appears in dictionaries,  but it is not even close.  The meaning of the  word means something to “keep away from” as being dedicated  to either  God or  Satan, which we all must avoid completely (as defined by St. Nicodemos). An example is the Virgin for  being  dedicated to God, she is anathema as she belongs to God.  An anathema is placed on evil things or heretics and their false teaching, the warning is to  keep away. Whoever makes friends or brothers with those  anathematized will pick up their spiritual disease and fall under the anathema as well.

With no disrespect for our Orthodox leaders and theologians, but with love of truth, we offer these truths which are being trampled upon.  For some years there have been meetings between the Orthodox and Coptic Monophysites as well as the Roman Catholics or the Papacy. These meetings resulted in the following action. High ranking Orthodox leaders and the Papacy or Coptics, have boldly jointly announced to the "lifting of anathemas" against both of these groups, and the deceived Orthodox  then proclaim that the Coptic heresy and the Papacy have the  same belief as the Orthodox–which not only is false but is a betrayal of the true Orthodox Faith, denying the exclusivity of the Church Christ founded.

Jesus Christ is the Truth, the Love and the Wisdom of God.  Truth always remains the same, despite the many attacks by the Devil who is the father of lies.  Whenever Love is separated from Truth and Wisdom, it is not only a false and deceptive  love, but is dangerous and deadly to the soul.  To protect us from heresy the Church invokes the anathema. Further understanding of its real meaning occurred to me, the writer,  when I visited Kifisia in Greece,  I saw a huge sign across a large military building, and in huge letters, the word  ANATHEMA.  Later I found out the building contained munitions, so it was a warning like Danger Keep away.

Anathemas are rarely applied, but when they are they are always irrevocable, because they are not against persons, but persons and  the falsehoods they preach.

This term is misunderstood by many people due to its infrequent use, but it affects everyone of us. St. Paul uses the term only once in the First Corinthians: “If any man does not love the Lord Jesus Christ, let him be anathema marantha.  The grace of our Lord Jesus Christ be with you” (1 Cor. 16:22-23).

To understand this term, which means: Keep away from such a man because of  his doctrine. Marantha means: until  the Lord comes. Here is what st. Nicodemos the Hagiorite says.

By Saint Nicodemos the Hagiorite 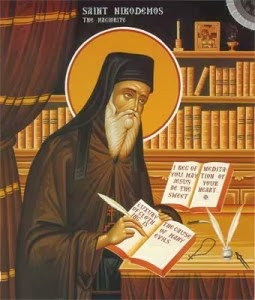 “The word anathema (written with epsilon in Greek) means, on the one hand, that which has been separated from men and consecrated to God – in which sense it is also written with ita in Greek – and, on the other hand, that which has been separated from God and from the Christian Church and consecrated to the Devil, in which sense the spelling with epsilon has prevailed for the most part, and not that with ita. And just as one does not dare take hold of or even to touch anything that has been anathematized (in the first sense), or consecrated to God, because of one’s being bound to honor and respect God-for  “every anathema that any man may devote unto the Lord shall be a holy of holies to the Lord” (Leviticus 27:28), says the Bible – so and in like manner also in the case of that person who has been separated from God and from the Church, and has become an anathema to the Devil, no one dares to associate or communicate with him, but, on the contrary, all the faithful keep away from him. So that both the one and the other anathema, in so far as they imply separation from men, do not differ from each other, but in so far as one implies consecration to God, and the other implies consecration to the Devil, each is exceedingly contrary to the other.”                            The Rudder  P518-519

It is good for all Orthodox Christians to understand the meaning of anathema, because, as we said previously, in meetings of many Orthodox theologians with Roman Catholics and Coptics, there has been a great distortion of truth in the most un-Orthodox declaration of the “ lifting of anathemas”,  which is not possible, because the anathemas being irrevocable remain. The Papacy and the Coptics remain under the anathemas only because of their erroneous beliefs.  What does Saint Nicodemos  say about dialoging with them?  “No one dares to associate or communicate with him, but, on the contrary, all the faithful keep away from him."

That the declaration by the Church of an anathema against a person or idea, is  directed against the idea held by the person, is shown by the fact that if he abandons the erroneous idea and embraces truth, the anathema no longer applies to him. For example,  the Arians and their leader Arius were anathematized because they declared that Christ was not truly God but merely a man. Obviously, if an individual  Arian changed his mind and declared that Christ is truly God and man, he would come out from under the anathema. A Roman Catholic who rejects the Pope and Papacy, and the  Pope’s  authority and infallibility and embraces Orthodoxy, comes out from under the anathema, having abandoned his erroneous belief.  A Coptic who denounces the heresy of one divine and human united nature in Christ and declares that Christ was born from the Virgin with two natures and ascended into heaven with these two natures, comes out from under the anathema.  This shows that an anathema is permanent and can never be lifted.

Again, an anathema cannot be lifted because it is against falsehood and heresies which state:

Concerning dialogues with them, St. Nicodemos says: “no one dares to associate or communicate with him, but, on the contrary, all the faithful keep away from him.”  The Orthodox who illicitly engaged in those forbidden dialogues with the Papacy and Coptics, have not budged them one iota from their heresies, but worse, their errors were reinforced by the Orthodox who bestow honor and praise on them and falsely certify that their false beliefs are  pleasing to God. All these and other heresies are all outside the true Church,  and they are banned them from Holy Communion.

The Coptics have been outside the Church for almost 1,600 years, proclaiming that the Orthodox  Church is in error, while they alone are the true Church. The Papacy has been outside the Church for almost a thousand years, replacing Christ with the Pope as head of the Church, claiming that they are the true Church.  St. John writes about this:  “They went out from us, because they were not of us; for if they had been of us, they would have continued with us; but they went out that it may be manifest that they were not of us”
(1 John 2:19). 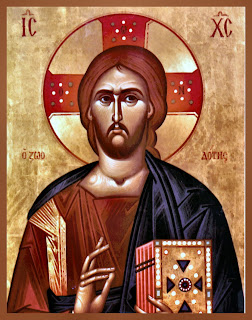 However, the Orthodox theologians, in identifying the papacy as a true church, and the Coptics as being  Orthodox, have betrayed the true faith, placing their souls in jeopardy, for they have ruled against the Ecumenical Synods and the consensus of countless Fathers of the Church. By engaging in forbidden dialogue, they have failed confessing the true Christ and His Church and have forfeited  some of our precious truths as well. They also utter falsehoods by calling the heretics “Orthodox”  placing themselves  under the same anathema.  Even worse, they do not welcome them into the only place of salvation, to be baptized and become brothers of Christ and our own brothers, thus denying them salvation!

In denying the exclusivity of the One Holy Catholic and Apostolic Church, they place themselves in direct opposition to Jesus Christ, the Head of the Church. May He enlighten those who have fallen into this quagmire, and transform them into true confessors of holy Orthodoxy to the glory of Christ our God, the eternal Founder and Head of the only Church!.