BOOK OF REVELATION ABOUT ORTHODOXY

BOOK OF REVELATION
ABOUT ORTHODOXY

THE WOMAN CLOTHED WITH THE SUN IN REVELATION  CH 12

Jesus Christ, the King of Glory, founded and established His Church against which, just as He promised, the gates of Hades have not prevailed. This Church’s existence has now attained close to two thousand years, and remains the only heavenly treasury of unadulterated divine truth in the entire world.  The Church is a divine-human institution constantly filled with the grace and  glory of God. In the Church the Holy Trinity is always present.  Angels are on watchful  guard at all times both outside the doors, and within the sanctuary, where Christ is always present in the reserved Mysteries.  The Church is clearly portrayed in the prophecies of the  Book of Revelation, as the woman clothed with the sun while the Dragon or  Devil constantly makes war against her seeking her destruction, which he continues to this day. But he has already failed and now goes after individuals, busying them with the fool’s gold treasures of this world, and blinding them that they do not see the great treasure of everlasting life.

“And there appeared a great wonder in heaven; a woman clothed with the sun and the moon under her feet, and upon her head a crown of twelve stars; and she cried, travailing in birth, and pained to deliver.
And there appeared another wonder in heaven; and behold a great red dragon, having seven heads and ten horns, and seven crowns upon his heads.  And his tail drew the third part of the stars of heaven, and cast them to the earth. And the dragon stood before the woman who was ready to be delivered, in order to devour her child as soon as it was born. And she brought forth a man child, who was to rule all nations with a rod of iron. And her child was caught up unto God and to His throne.  And the woman fled into the wilderness where she has a place prepared of God, that they should feed her there for 1260 days” (Rev. 12:1-6).  “And when the dragon saw that he was cast onto the earth, he persecuted the woman who had brought forth a male child.  And the woman was given two wings of a great eagle, that she might fly into the wilderness  into her place, where she is nourished for a time, and times and half a time, from the face of the serpent.  And the serpent cast out of his mouth water as a flood after the woman, that he might cause her to be carried away by the flood.  And the earth opened her mouth and swallowed up the flood which the dragon had cast out of his mouth. And the dragon was wrathful with the woman and went to make war with the remnant of her seed, who keep the commandments of God and have the testimony of Jesus Christ.  (Rev.12:13-17).

The woman clothed with the sun is suffering in the pangs of childbirth while the dragon or Devil seeks to devour and  destroy her male child which is Jesus Christ. The woman is not the Theotokos as has been suggested, for two reasons. Firstly, the book of  Revelation was written a very long time after she gave birth to Christ. Secondly, the Virgin did not suffer in any way for hers was a pure virgin birth without pangs or pain of any type, remaining a virgin, before, during and after childbirth still a virgin.

This woman clothed with the sun is  Holy Orthodoxy, the One Holy Catholic and Apostolic Church, which is clothed with the Sun of Righteousness, Jesus Christ, however here the Church is giving birth to Christ, not physically but dogmatically, which took place over centuries.  The heretics maliciously attacked the Church, who had conceived and held the truth and dogmas of Jesus Christ. They knew well that Jesus is both God and man, having two natures, divine and human,  and two wills divine and human.  The Church was and is always attacked by heretics, causing her much  suffering;  and many were tortured and put to death in the defense and proclamation of the truth of Jesus Christ.  This battle against the woman was preceded by the persecution of the Jews and the Roman emperors who were idolaters.  The Church will always be under attack by the Evil one, through false religions and tyrannical governments as well as heretics, all being vicious and energized by the evil one.

This second birth of Christ came about when the various dogmatic truths came under attack and the woman clothed with the sun established her defense, which were finalized in the Seven Ecumenical Synods. The crown of twelve stars is the enlightened teaching of the twelve Apostles.  The moon under her feet signifies the power of night, night being the time of heretics and enemies.

The women clothed with the sun,  Holy Orthodoxy, gave birth gradually to Christ, and concluded  with  the dogma that rejected the haters of holy  icons  which depict the Godman, His Mother and the Saints.  Through his agents, the devil had condemned the adoration of icons as idolatry. This marked the end of a four century battle of the woman against the dragon and the victory of the woman is  celebrated on the first Sunday of the Great Fast, called the Sunday of Orthodoxy, which celebrates  the dogma leading to the return of the  holy icons.
“The dragon cast out of his mouth water as a river . . .”   This signifies corrupt and heretical doctrine which is like a river was  spread among people by the heretics all through the Empire, causing many to follow them, thus it is described as rivers. By their numbers and at times political support, they thought they would conquer the Church and drown in their false doctrines.

The Woman finally completed her task and bequeathed to the heavenly and earthly world the true dogmas of Orthodox Theology. Christ is true God from true God, who united His eternal divinity with humanity from the Virgin, and being born in eternity from the Father, he has the same divine  nature. Then coming forth in a second birth in time, he has the same human nature as His mother. He is the Godman, perfect God and perfect man. He has two natures, and two wills, divine and human. These natures remain dual and never revert to a single nature as Coptic heretics claim.  Finally if we take a look at the holy icons in the Church and at home, it is good to remember that these were handed down to us by the Woman depicted in the Book of  Revelation who is clothed with the sun;  so let us rejoice and kiss and embrace the holy icons, of which the Church was once deprived, and always through them bring to our minds the Lord, His Mother and the Saints.

In the battle against the women regarding the holy icons,  And the earth opened her mouth and swallowed up the flood which the dragon had cast out of his mouth.    The “earth opened her mouth” means they have something to say. This included  Pope Gregory II and Gregory III, who opened their mouths and spoke strongly against the icon haters. St. John Damascene also opened his moth with his flood of truth to swallow up the flood in his defense of the holy icons, resulting in his right hand being cut off.  Queen Irene also helped by calling the Seventh Ecumenical Synod in 787, which drowned the enemies with anathemas by decreeing in favor of the adoration and honor of the icons.  The wonderful saint Theodora, in 842, re-established the adoration of icons during her reign, and dedicated the Sunday of Orthodoxy, on which the polluted  “river” of the dragon disappeared from the earth. 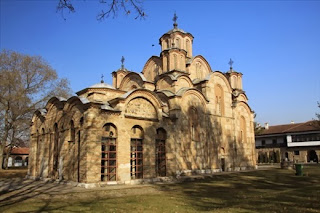 And the dragon was wrathful with the woman and went to make war with the remnant of her seed, who keep the commandments of God and have the testimony of Jesus Christ

The woman clothed with the sun! She is our holy Orthodox Faith and will always be  triumphant, causing us to believe in her, rejoice in her, glorify her and gain victory over our personal sins by  keeping  the commandments, celebrating the Divine Liturgy and the Feasts.  Now the dragon concentrates on the seed of the woman which is all of us Orthodox Christians. He strives to tempt us with the pleasures of this life, with unbelief and disbelief, with pursuing money and material things, and with entertainment and general infidelity in marriage and in the faith. We should enter the battle against the dragon by loving the fasts especially that of Wednesday Christ’s betrayal) and Friday (Christ’s crucifixion), an easy thing if we so desire;  by reading the Scriptures daily and praying at least in the morning and night. If we do these things our entire lives will be filled with every  blessing. Joy will be our constant companion, no matter what happens. We need to attend to ourselves shedding  every vice as we acquire every virtue. We will enjoy uplifting gladness when we unload the heavy burden of our sins through confession. This is how we begin, and the rest is easy, for God will give us strength and increase our faith and love, May His grace and the light of His countenance shine upon all of us!
Posted by Unknown at 8:18 AM