This holy and  Great Martyr of Christ, celebrated on February 26, was the Samaritan women who conversed with Christ at Jacob’s well in Samaria. The Gospel of John records shows how  Christ knew about and revealed her history of many husbands. She was baptized along with her two sons and five sisters after Pentecost.  They went with the Apostles preaching Christ, bringing many idolaters to the truth, for their teaching was filled with the power of Holy Spirit which they had received since Pentecost. 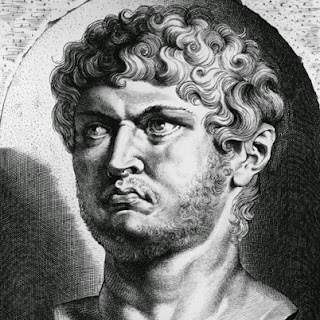 Nero, the  emperor of Rome, had begun a huge and vicious persecution in 66 AD, for he sought to kill all the Christians, especially the most prominent Apostles Peter and Paul.  His maniacal desire was to wipe the name of Jesus Christ off the face of the earth.  The more he increased persecution, the faith of the Christians increased even more.

St. Photini was in Carthage with her son Joseph when the persecution began, teaching the Gospel to many people. Victor, her eldest son was in the military stationed in Rome, and was promoted to the rank of general.


Nero, not knowing that Photini’s eldest son was a Christian, sent him to Italy to persecute the Christians. An official of southern Italy  named Sebastian  advised Victor to obey the emperor.  He then urged him and his companions to stop preaching Christ. Victor, said that he would obey the will of the Immortal; King, not the tyrant Nero. Sebastian was suddenly blinded and became mute, and suffered severe pain. This lasted for three days, and on the third day he shouted: “I believe in the God of the Christians, and after baptism  he was completely cured embracing the true faith. 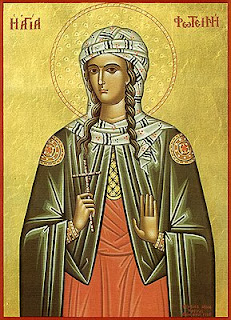 Photini’s son Victor then baptized him and he later became a holy martyr. Many pagans, upon seeing this miracle, feared that they might suffer the same way, and asked Victor to baptize them.

When Nero got word of these events he ordered the arrest of all Christians, many were brought to Rome. Jesus Christ appeared to the Christians telling them to increase their faith and they would obtain the kingdom of heaven.  Appearing to Victor, Christ changed his name to Photinos, so that alone with his mother they would enlighten many (the Greek word means “light giver).

Along with many other Christians they were brought before the Emperor Nero, who asked why they were here in Rome.  Photini told him that they came to teach him to believe in Christ, and that they were willing to sacrifice their lives for the Lord.  Then all the Christians were tortured for hours, feeling no pain. When Nero heard of this he ordered their hands to be cut off. Seven times the soldiers attempted to carry out his order,  but fell to the ground paralyzed. He decided to place the men in a dark prison. Photini was offered  a large amount of gold and Nero sent his daughter Domina to go and talk with the saints. Photini learned that she was secretly a Christian. Domina and her many servants were then baptized, and their names were changed.

Nero, upon learning of this ordered a furnace to be heated for a week then Photini and the others were put in the furnace  remaining in it  for three days. Nero ordered the furnace opened to dispose of their bones, but found them to be completely unharmed by the fiery flames. When the populace heard this they began to praise God.  In his rage, Nero ordered that they all be fed with poison.  Given the poison they all drank what was offered remaining unharmed. The chemist who prepared the poison burned all his sorcerer’s books and then declared his firm belief in Christ and was  baptized receiving the name Theoclitos. Nero immediately had him beheaded, and the newly baptized saint entered the kingdom to be crowned by Christ.

Nero then ordered that lead and sulphur be boiled and then poured into all the saints ears. The smell was terrible but they all remained unharmed.  Nero continued with  tortures but to no avail. He then had soldiers cast them into a dark prison filled with poisonous snakes, but when they entered the prison all the snakes died, and a sweet fragrance filled the prison and an extremely bright light. Christ appeared and said: Peace be with you!  Taking Photini’s hand, Christ told her: I am always with you.

Before being thrown into prison their eyes had been cut out. Christ healed them and receiving  their sight, they joyfully praised Him, and he encouraged them and rose to heaven. After  remaining in the prison for three years the Romans completely forgot about them. But they were zealously  preaching the Gospel and baptizing many pagans.

Soldiers finding them to be still alive and having  regained their sight, Nero ordered them to be crucified up side down for eight days with their bodies being torn with iron claws, until their joints become useless and destroyed.  On the eighth day the executioners came to see if they were still alive, and upon just looking at the Christians, they became blinded. An angel came down and freed all the Christians. St. Photini then cured the executioners of their blindness, rejoicing as they all became believers in Christ and were baptized. 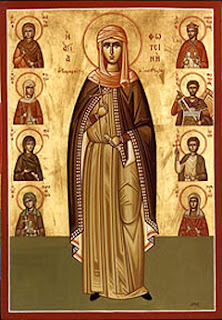 When Nero heard of this he ordered that Photini be cut all over her body and cast into a dry well. Her companions and her sons were cut up and thrown into an old bathhouse. Nero ordered the soldiers to cut off the breasts of the five sisters of Photini. However Photis would not permit the soldiers to approach, angering Nero who seeing her bravery, and had her executed. This was done by bending down two tall tree tops  and tying one to each of the feet of Photini’s sister. When they  were released and snapped up, her body was split in half.  Nero then had all the saints except Photini beheaded. Saint Photini was depressed and sad because she had not received the crown of martyrdom as did her companions.  Soon she was visited by Christ who signed the Cross over her and several days later she died in prison and went to be with him in everlasting joy!  How wonderful is God in His saints!
Posted by Unknown at 10:57 AM