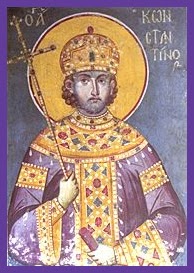 The Church of Aghia Sophia will be returned to the Orthodox Christans according to the Prophecies. As to the date and time only the Lord knows, but as to events and history, we have limited knowledge, but certainty that the church will be orthodox asgain to the glory of our true church. One things seems sure, and the reader can determine this, thet Russia is going to play a large role in this event to come. 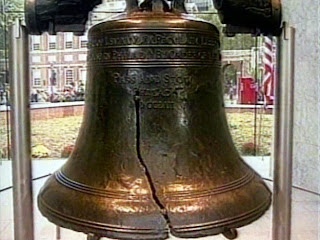 THE REAL BUT UNMENTIONED FREEDOM

We exalt and reverence freedom, we inhale and exhale freedom, and we attempt to share this precious freedom with many others so that they the whole world may enjoy the wonderful gift of freedom. This is our pride and boast especially in America and rightly so, for freedom is precious! This was also  mentioned in the rallying cry of the French Revolution, Freedom (Liberty), Equality and Brotherhood.

The daughter of a king (Constantos), lived in the great city of Alexandria, during the period of  Maxentius (304 AD) the unbelieving ruler. Katherine was extremely beautiful, statuesque, and without and most kind and compassionate.
She was tutored by Greeks, was very familiar with poets and philosophers of that era. She also was familiar with the great poets and philosophers of that time: Homer, Virgil, Aristotle and Plato. She was not only learned in the teachings of the great philosophers, but also the works of the physicians Hippocrates, Erasistratus, and Galen. She was excellent in both rhetoric and logic, and   had knowledge of numerous languages causing those who knew her to marvel in amazement at her wisdom.

"Glory to God for All Things"

Kontakion 1
Everlasting King, Thy will for our salvation is full of power. Thy right arm controls the whole course of human life. We give Thee thanks for all Thy mercies, seen and unseen. For eternal life, for the heavenly joys of the Kingdom which is   to be. Grant mercy to us who sing Thy praise, both now and in the time to come. Glory to Thee, O God, from age to age.
Ikos 1
I was born a weak, defenceless child, but Thine angel spread his wings over my cradle to defend me. From birth until now Thy love has illumined my path, and has wondrously guided me towards the light of eternity; from birth until now the generous gifts of Thy providence have been marvelously showered upon me. I give Thee thanks, with all who have come to know Thee, who call upon Thy name.

Entrance of the Theotokos into the Temple. 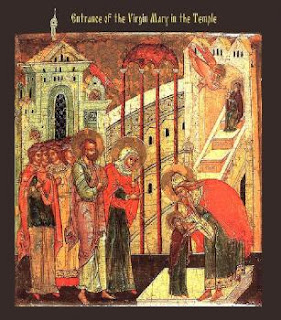 Today is the prelude of goodwill of God and the proclamation of the salvation of men. The Virgin appears clearly in the temple of God and foretells Christ to all. So let us cry to her with loud voices: Rejoice, thou who art the fulfillment of the Creator's providence.

Troparion of the Feast, Tone 4

The Holy Orthodox Church  celebrates the feast of the Entrance of the Theotokos into the Temple. Leading the procession into the Temple were virgins with lighted tapers in their hands, then the three-year-old Most-holy Virgin, led by her father and mother. The virgin was clad in vesture of royal magnificence and adornments as was befitting the “King’s daughter, the Bride of God” (Psalm 44:13-15). Following them were many kinsmen and friends, all with lighted tapers. Fifteen steps led up to the Temple. Joachim and Anna lifted the Virgin onto the first step, then she ran quickly to the top herself, where she was met by the High Priest Zachariah, who was to be the father of St. John the Forerunner. Taking her by the hand, he led her not only into the Temple, but into the “Holy of Holies,” the holiest of holy places, into which no one but the high priest ever entered, and only once each year, at that. Zachariah “was outside himself and possessed by God” when he led the Virgin into the holiest place in the Temple, beyond the second curtain-otherwise, his action could not be explained. The Most-holy Virgin remained in the Temple and dwelt there for nine full years. While her parents were alive, they visited her often. When God called her parents from this world, the Most-holy Virgin was left an orphan and did not wish to leave the Temple until death or to enter into marriage. The Most-holy Virgin Mary was the first of such life-vowed virgins, of the thousands and thousands of virgin men and women who would follow her in the Church of Christ. Through her intercessions, O Lord Jesus Christ our God, have mercy upon us, and save us. Amen.
Synaxarion of the Feast

CRISIS IN THE MIDDLE EAST

What is going on in the middle east?
After almost 2,000 years, how and why did the Jews return their own country?

Why were they dispersed for almost two-thousand years?

Will they one day recognize Christ as the Messiah?

Did God utterly forsake Israel in the flesh?