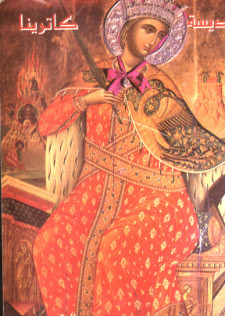 The daughter of a king (Constantos), lived in the great city of Alexandria, during the period of  Maxentius (304 AD) the unbelieving ruler. Katherine was extremely beautiful, statuesque, and without and most kind and compassionate.
She was tutored by Greeks, was very familiar with poets and philosophers of that era. She also was familiar with the great poets and philosophers of that time: Homer, Virgil, Aristotle and Plato. She was not only learned in the teachings of the great philosophers, but also the works of the physicians Hippocrates, Erasistratus, and Galen. She was excellent in both rhetoric and logic, and   had knowledge of numerous languages causing those who knew her to marvel in amazement at her wisdom.

The wealthiest of men bid for her hand in marriage, for she was also a heiress to the throne, being the daughter of the former king. Relatives with her mother were afraid that the kingship of her father would fall to some unworthy individual, so they advised her to marry as soon as possible. But Katherine desired to remain a virgin, a high philosophical objective of that time. She turned away all proposals. But she was continually visited by suitors even though she requested to be left alone. She then decreed that the man whom she would consent to marry must be “young and equal to her in the four virtues that were attributed to her.” She explained also that she would never to consent to a man who was illiterate or belittled while in her presence. The virtues she mentioned were compassion, wealth, wisdom and beauty, and if anyone did not have these attributes, he would be deemed unworthy of her.

Those who sought her hand did not know what to make of her requests, among them an only son of the Roman emperor who had equal compassion and wealth, but not possessing her wisdom or beauty. Then her mother, not comprehending what was going on, decided to get advice from a saintly ascetic living in the suburbs of the city. This holy man tried to make Katherine aware of the heavenly King Jesus Christ. So he told her of a man who was magnificent and far exceeded her in all ways. His magnificence beauty even caused a shadow on the sun. His widow governs his entire consciousness. All the nations are fed with His wealth which never decreases. But concerning His compassion, it is beyond all description and is infinite.

Katherine was overcome with awe. Thinking this was some earthly man. The ascetic assured her that he had told her the truth assuring her that there was no exaggeration , while she wondered as to who this man was and whose son he was. The ascetic told her that he did not have an earthly father but received human nature from the most holy Virgin, who is well known as the Queen of heaven, and that he is also adorned by the angels. She sought to behold this young man being very thoughtful as to who he was. The ascetic instructed her what to do in order to behold this man. Looking into his eyes she said how she knew he was a pious and good man and that she believed all that he told her asking for his instructions.

The ascetic then handed Katherine an icon of the Holy Theotokos holding Jesus. He told her to take the icon and pray to her all night long and she will decide if you are worthy to behold her Son. If you approach her with faith I believe that you will see him for whom you seek in the depths of your soul. When Katherine followed his instructions, she dreamed that the Holy Mother appeared and she was holding the Child who was radiating light greater than the sun, but kept his head turned away from Katherine. Then the Holy Mother spoke to her Son saying: Look at the beautiful and pious servant Katherine. He said. She is ugly and not a believer, I will not look at her. The Virgin imploring Him replied: But she is among the wisest, the wealthiest and most fair of all in the cities of the world. But He refused saying: Mother as long as she is in this state of mind, she is unknowledgeable, trite, and I will not allow her to see me. Again she implored: Do not deny her as she is your own flesh and blood, but tell her what to do in order to look upon you and be enabled to see your beauty and grace. Jesus told her to return to the hermit who had given her the icon, and
do whatever he says and then she will be able to look upon me, gaining comfort and hope.

Katherine awoke, and accompanied by several other women she went to the ascetics cave, crying she fell at his feet. Telling him of what had taken place she begged him to instruct her what to do. The old man began to catechize her in all the mysteries of holy Christianity. Beginning with the Old Testament, he continued to the Ascension of Christ into heaven. He told her of the condemnation to Gehenna and the wonderful glory of Heaven.

Having been confirmed in her belief, Katherine was then baptized and was told to pray to the Mother of God, which she did throughout the day and the night. She fasted and wept incessantly, and finally fell asleep. This time when she dreamed of the Mother and her Child, only now He gazed at her admiringly. She asked her Son give Katherine a ring of betrothal and the Lord placed it on her finger, saying: today you are made my bride for ever; never take another bridegroom. When she awoke she saw the ring on her finger and exulted with many tears of joy.

Meanwhile, the Emperor instructed all to come and worship his gods threatening many ills and dangers. Many entered Alexandria and obeying the Emperor, offered a great number of beasts for slaughter to their gods. This bothered Katherine seeing people trade their immortal souls by denying the true faith. When she went to the area of sacrifice, she was disgusted to see death and destruction done in the name of gods. But those who were engaged in the slaughter stopped to gaze at Katherine’s beauty. Katherine called them fools for their belief in idols that hold no promise or hope. “There is only one God, the immortal God, who gave himself up to the Cross for the human race. Because of Him, life exists, kings reign, the people allow themselves to be ruled, and man forms many ideas. God does not want your sacrifices of animals but that you observe His commandments.

The Emperor was astonished at Katherine and thought her not to be mortal, but one of the gods and she assured him that she was not; he then warned her not to speak against the gods. He then\ proceeded with plans to outwit her and stop her freedom to speak against the gods. As king, he did not desire to match wits with a woman. He had 150 of the greatest minds of that era come to Alexandria to do battle with Katherine. He urged them to combine their intelligence, and prepare for mental battle. He told them to show her claims to be false and make her look foolish, and their ewards would be beyond any expectation. But the Emperor warned them that if they fail they will die the most terrible of deaths.

The scholars were extremely confident and greedy assuring the Emperor that victory would be his. Filled with assurance and joy, the Emperor sent for Katherine. She was visited by Archangel Michael, telling her not to fear as Christ would enable her to conquer And he said: Because of you many will believe and you will receive the eternal crown of martyrdom.

Appearing before the gathering, she was asked if she was aware that she had blasphemed the gods who were most holy. She told them that she was not aware but went on to reveal the feebleness of those gods and the strength of the one God. Her answer was so amazing and stirring, that all the scholars were dumb-founded and could not even speak. They exclaimed, We cannot argue against truth. The Emperor was angry and filled with rage, ordering a large fire to be kindled and that all the scholars be burned. The scholars on their knees, begged Katherine to intercede with God seeking their forgiveness. She signed the Cross over them and blessed them. All were fed to the flames on November 17, but, O the wonder, not one of them perished. They left the city and went to spread Christ in their home lands.

The Emperor turned his attention on Katherine and hopelessly tried to convince her to follow his gods, Failing he had her stripped naked and whipped for hours. Then he imprisoned her for 12 days without any food or drink. But a dove came bearing food for her, and the dove said: Do not lose faith, for by your patient endurance, many will seek and find my name. You will yet be crowned. Even the Emperor’s wife Augusta came to belief in Christ and visited Katherine.

Someone made a suggestion to the Emperor, that they build a machine of wooden wheels, two rotating blades to the right and two to the left. The edges would have sharp iron blades. Tie the woman between the blades. Then fear will cause her to denounce her God, and you will get rid of her. After getting this contraption ready they placed Katherine on it to destroy her. She did not even take notice seeing what was going to happen to her, urging them to do what you must do. Ropes were broken and the machine began to turn wildly killing many pagans. As the wheel was turning, Katherine implored them: Why do you insist in fighting against the truth, testing the power of God senselessly? Meanwhile, the Emperor who was maddened by the events, turned and saw Augusta, who wept during the Saint’s execution. Her breasts were cut off and she was beheaded on Nov.23rd.

The next day, St. Katherine was brought before the Emperor who accused her of causing him so many woes. He told her that he should have executed her long ago, but could not destroy such wisdom and beauty. Save yourself. Sacrifice to the gods, and every wish you offer will be my command. Refusing, the Emperor ordered her to be put to death. Katherine was brought outside the city to the place of her death. People were crying and wailing as they awaited the coming death of such a lovely and beautiful person, not understanding how she rejected the Emperor’s offers to her, and die at such an early age.

As they cried out, Katherine said: Stop your mourning, Rejoice! For I am now going to greet my God and Savior in heaven, my Creator, my Bridegroom, Jesus Christ. I shall reign with Him for ever and ever. Do not then, weep for me, but weep for yourselves, for you will be in torment unto the ages of ages.

Having come to the site of her martyrdom, Katherine knelt in prayer, asking the Lord to never forsake her, then they cut off her head, causing milk to pour forth rather than blood. The martyric death of Katherine occurred on November 24th around the year 305. After this the angels bore her body to Mt. Sinai where it was found by some monks, who built a monastery there and enshrined her relics. This monastery dedicated to St. Katherine is still active and flourishing honoring her holy name – Katherine the Great Martyr!