THE RELIGIOUS AUTHORITY OF
JESUS CHRIST 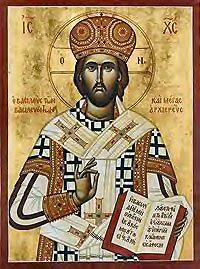 The Logos and Son of God who became incarnate of the Ever-virgin Mary. And became the Son of man Jesus Christ, the Anointed Savior. He was born a Jew among the Jews but did not come to save the Jews but the entire race of man. He is the King and God of all mankind and the only legitimate religious authority in existence, Orthodoxy is His Body and Church.  Christ did not come and then disappear into history, but He came and He established his religious authority to which all nations will one day submit. Christ is the Truth and established His Church so as to embrace all men. His authority will bring peaceful coexistence of all nations and the happiness and prosperity of all mankind.

The whole earth is destined to recognize the religious authority of Christ alone is truly, and that He alone is truly God and truly man – the Theanthropos, the Savior and Redeemer of men, and the only one who has been totally victorious and through His victory has granted eternal salvation to all men who so desire. What results can we expect from the recognition of Christ’s authority which is offered to all and will certainly be accepted sooner or later?

JEWS IN THOUSANDS BROUGHT  TO FAITH  BY JESUS CHRIST


St. Gregentius was at first a deacon in the church of Milan, then he was taken to Alexandria where he was consecrated bishop of the Homerites in south Arabia by Patriarch Proterius. He was a good shepherd and wonder-worker, organizing the church with the help of the Christ-loving King Avram. He performed great and wondrous things by his holy prayers. He governed the church for thirty years, and entered peacefully into eternal life in the late fifth century.

In the town of Zafar, the majority of its inhabitants were Jews who clung to the old law being firm in their conviction not to recognize the Messiah. Gregory strove among them seeking to bring them to Christ and the truth of the Christian Faith. After a period of time the Jews suggested to  King Avram that there ought to be a debate on faith, offering him the assurance that if they were defeated, they would embrace the Christian faith, for they were certain tht God would give them the victory. After a period of forty days of preparation the debate began Ervan being spokesman and orator for the Jews. The spokesman for Christians was Saint Archbishop Gregentius.

During the debate Ervan accused the Christians of worshiping three gods, Father, Son and Holy Spirit, and how the Lord gave the great commandment in Mt. Sinai that God is one. Gregentius countered: “The Christians worship one God the Creator of all, in three hypostases, even as the Lord God was mentioned thrice in the verse just cited. Hearken now to the words of the psalmist David: “By the Logos of God were the heavens established, and all the might of them by the Spirit of His mouth (Psalm 32:61).  Observe how David also proclaims three hypostases, but a single divinity, co-essential, without beginning, co-everlasting, and co-enthroned. The Lord is one God the Father, His Son and Logos, and His Spirit is the Holy Spirit.”

Inspired by the Holy Spirit, and drawing prophecies and other writings from Scripture, Gregentius totally dominated the debate, leaving Ervan impotent in his meager efforts. Soon Ervan attempted to flee the debate but his co-religionists prevented him, saying: “Do not abandon us, for God is with us.”
Ervan then  attacked the adoration of material icons claiming this to be idolatry. Gregentius proved the correctness of the honor given by  many other material things, the golden jar with manna, the tablets of the law, the ark of the covenant, the golden jar with the manna, the tablets of the law, Aaron’s rod that budded, the altar, the censer, and the seven lamps” Ex. 25:37). . He said: “Did not the cloud cover the tabernacle of witness? For the tabernacle was filled with the glory of the Lord (Ex.40:34). The debate lasted for four days leaving Ervan dispirited, and he remarked to his fellow Jews, “The man is far superior to me in intellect and oratory, I cannot gainsay or contradict his reasoning.  He has turned to nothing all my arguments and queries. The Jews would not accept Ervan’s words insisting that God is with them, and will assist us to utterly defeat Gregentius.

That night Ervan had a dream in which he saw Moses and Christ, Moses having his arms crossed across his breast was bowing to Christ as Lord and God. He asked Moses, if it was proper to conduct myself in such a way before Jesus? Moses rebuked him and told him to be quiet while he was worshiping the Lord. Moses told him to stop harassing Archbishop Gregentius and perverting the Scriptures, saying, know this that you shall be defeated tomorrow. The vision vanished and he was awakened not knowing what to think or do.

The next day the debate continued and the Archbishop continued to prevail over Ervan reducing his arguments to worthlessness.. Then Ervan came up with an idea which he hoped would snare the holy man, for he could not offer any further arguments against the Christian faith. He said to the Saint: Why should we consume so much time in discourse and argument which has proved vain and without profit? Let us do away with all contention and rivalry and come to actual deed. Show me this Jesus Christ living, that I might perceive Him with the senses and converse with Him.  Then in truth shall I become a Christian. The Jews objected to his words and urged Ervan to continue and never become a Christian, but play the man and be strong. Stand firm and be strong and do not waver in our religion for God is with us.

Ervan rebuked his fellow Jews, saying: “What nonsense are you speaking, O mindless ones? If Gregentius should truly show me the Christ of whom the prophets spoke, and  if I choose to resolutely disbelieve then would I be an imbecile and wanting in understanding, and indeed estranged from the God of our Fathers".

The Jews were convinced that  the appearance of Christ alive would be an impossibility. They reasoned that He had been put to death and buried for so many centuries and could never again appear alive.  The Saint, however, was cognizant of the words of the Lord who said in the Gospel: “Amen, amen, I say unto you,  whoever believes in me the works which I do shall he do also and greater works than these shall he do because I go to my Father” (John 14:12).

Then the Saint, faced east, and entreated the Lord with tears flowing from his eyes, then with all his heart he cried in faith: “O Master Lord Jesus Christ, Son and Logos of the awesome and invisible Father, who impassibly and without change, was begotten, not made, before all the ages; and who together with the Father and the Holy Spirit is worshiped and glorified by whom the heaven and earth were created and the foundations thereof are laid; and who for our sake and our salvation, bowed down the heavens and descended and became man of the Holy Virgin Mary and the Holy Spirit; and who, as the Lover of man showed yourself upon earth and conversed with men, associating with the lawless Jews and  working signs and wonders among them; do you overshadow them with your power and open their darkened eyes which have been blinded by the Devil. Do you appear to them, according to the multitude of your pities, that they may see for themselves, this very day, and believe in you the only true God, together with the Father who sent you and your Holy Spirit” (John 20:21).

Hearing his words, all eyes turned toward the Archbishop. Suddenly a great earthquake occurred with the boom of a mighty thunderclap in the direction of the east. In terror everyone fell to the ground, and after a while they looked up toward the east. They saw the heavens opened and parted. Then a radiant cloud stretched before them. They beheld Jesus Christ coming on the cloud from the heavens toward them which caused terror among the Jews.

His countenance was filled with ineffable light, and His garments were shining as lightning. He appeared clothed in a scarlet cloud that was most beautiful and glorious. The beautiful crown upon His head which was extraordinary, the rays coming from the it caused it to look like a crown of thorns. The Christians were filled with awe standing in reverence but the Jews were terrified beating their breasts as they bowed their heads to the ground.

Then the voice of the Lord was heard, saying to the Jews: “On account of the supplication of my great archbishop have I appeared unto you whose fathers had .crucified me." The Jews fell to the ground and were immediately blinded and unable to see anything.  The Christian  believers saw everything, and watched Christ and the cloud receding into the heavens.After all this the Jews continued to resist baptism but when their leader received his faith and the return of his sight upon being baptized, all of the thousands of Jews, desiring the return of their sight, were baptized and then after Baptism believed in Jesus Christ.

Posted by Unknown at 2:17 PM No comments: