BAPTISM ENTRANCE INTO THE ORTHODOX FAITH


BAPTISM ENTRANCE INTO THE ORTHODOX FAITH 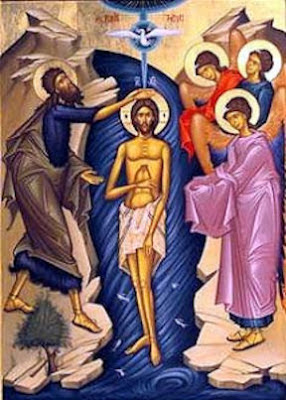 When you were baptized in the Jordan Lord, The adoration of the Trinity was manifest
The voice of the Begetter bore witness to you, Calling you His own beloved Son.
The Spirit appeared in the form of a dove, Confirming  the certainty of the word.
You have appeared, Christ our God,
And illumined the whole world.
Glory to you!

We refer to ourselves as Orthodox Christians because we were either born into the faith, or we chose  Orthodoxy as the True Church, wherein is found the True Christ.  Herein are important  things worth considering about and discussing.  The Jews identified themselves as being Jews by the particular mark which the Lord instituted as their identification, showing them to be different than the Gentiles, that mark being circumcision. This means that the Jews, as a nation, were marked and cut out, (circumcised) chosen apart from the rest of mankind,  which helped to keep them away  from worshiping their idols and false gods, or from  marrying their women, or following their diet.  The law of circumcision was also a mark of their covenant with God which dated back to Abraham. The Jews did not intermix with the gentiles and usually referred to them as the uncircumcised.

The Apostles, who best understood and interpreted Christ,  and many  having received His teaching directly,  established beyond dispute what Christ meant in His baptismal command, for they issued Apostolic Canons concerning this subject. Notice the firmness of their words which leave no room for contradiction.  It calls for any Bishop or Priest to be deposed. If they violate this command.

CANON L (50)
If any Bishop or Priest does not perform three immersions (baptisms) in making one baptism, but only a single immersion (baptism) that given into the death of the Lord, let him be deposed. For the Lord did not say, Baptize into my death, but,“ Go you and make disciples of all nations, baptizing them in the name of the Father, and of the Son, and of the Holy Spirit”
(Matthew 28:19).

Orthodoxy alone preserves this original baptism ordered by Christ our King, but woe to those who ignore or change what He established. No one has a right to deviate from this law of triune Baptism which provides entrance into the Church and gives Orthodox Christians their important mark that makes them different than all others on the face of the earth.  Why would not every person entering the Church receive the exact same baptism, for there cannot be a variety of baptisms in the Church.  We  confess every time we pledge in the Creed: that we believe in “one baptism for the remission of sins?” As there is only the one True Church, there is also only one True Baptism.  Just as there is no choice in churches but a single true church established by Christ, so there is a single true baptism ordered by Christ, for they go together and it is our divine mark which identifies us as Orthodox Christians. There can be no confusion for Christ is not the author of confusion.

But exactly  what is baptism and why is it so important?  Christ commanded baptism to the Apostles, who threatened with deposition those who failed to baptize properly.   Let St. Paul supply the answer to this question as He does in this reading used at every Orthodox Baptism and on Holy Saturday:

"Brethren, do you not know that all of us baptized into Christ Jesus were baptized into His death  We were buried therefore with Him by baptism into death, so that as Christ was raised from the dead by the glory of the Father, we too might walk in the newness of life.  For if we have been united with Him into a death like His, we shall certainly be united with Him into a resurrection like His. We know that our old self was crucified with Him so that the sinful body might be destroyed, and we might no longer be enslaved to sin.  For he who has died is freed from sin.  But if we have died with Christ, we believe that we shall live with Him.  For we know that Christ being raised from the dead will never die again; death no longer has dominion over Him. The death He dies, he died to sin, once and for all, but the life He lives, He lives to God.  So you also must consider yourselves dead to sin but alive to God in Christ Jesus”                 (Romans 6:3-11)

The word baptism in Greek is properly translated as immerse, its root being to soak or dye, where repeated immersion is most necessary.  Christ was buried for three short days, and we are plunged into the baptismal waters three times into His death, and we rise into His resurrection. This typical spiritual death is followed by resurrection.  To paraphrase St. Paul:  If we have not been baptized into a death like His we shall certainly not rise in a resurrection like His. No one can gainsay this longstanding sacred tradition with impunity, for to do so is to overthrow the one thing that guarantees us total and absolute remission of sins.  This is a fundamental law of the Church, and the Devil works vehemently against it to overthrow its great power, and wonderful effects.

As the Jews referred to others as uncircumcised, the Orthodox Christians considered those outside the Church as unbaptized.  How would not anyone entering the Church not want and demand baptism which washes us completely clean of every defilement rendering  us able to rise to any position in the Church open to us, because. No matter what our sins were, Holy Baptism makes us completely new and completely clean before God.   From day to day we sin and being outside the Church, having no place to deposit our sins, we sin more causing the load of sins to gets heavier and unbearable. Why would anyone not want to rid themselves of  this heavy load of sins into the death of Christ in the waters of Baptism, where they would disappear?

It is impossible for any reasonable man to read this Epistle and not see that there is but one Baptism, just as we confess in our Creed.  The Church which preserves this Holy Baptism can see no other for there is but one True Church and one True Baptism. Let us look at the basic points made.

Baptized into His death
Buried with Him by Baptism into death
Walk in the newness of life
United into a resurrection like His
Our old self was crucified with Him
That the sinful body be destroyed
No longer be enslaved to sin
Alive to God in Christ Jesus.

Only Orthodox Baptism has the wonderful qualities  and power, and this is found in the True Church.  No on outside the Church can perform Baptism as they do not have the necessary things needed for baptism.  Baptism first needs are God's agents, the ordained Bishop or Priest, who are endowed with special grace and authority from on High; second is and abundant supply of water,  such as a lake or river, or a large enough font, allowing total immersion. Most important is the result of the prayers of the Hierarch or Priest,  who beseech God to send down His Holy Spirit to sanctify the baptismal waters, for it this action of the Holy Spirit that purifies us in the waters of baptism.

Let us mention, Chrismation. the mystery following Baptism,  but not a substitute for Baptism. This anointing with chrism fulfills the promise of the Lord: "I will not leave you  orphans.; when the Comforter, the Spirit of Truth comes, He will remind you of all  that I have told you."  It is not the purpose of Chrismation  to cleanse us of our sins, nor do we die and arise in this mystery, but after Baptism we are presented before God totally clean and without blemish. The prayer during the application of holy Chrism, defines it: "The seal of the gift of Holy Spirit."   Having been  cleansed in Baptism, renders us worthy and able to receive the gift of Holy Spirit.  Baptism makes us completely new, being our start to walk in the newness of life. The fact is that after baptism we become new wineskins which will not break when the new wine,  the supernatural wine, Holy Spirit from God, pours into our souls.

That there is a real death,  and a real resurrection, even though typical,  in Orthodox Baptism is shown by St. Paul’s words: “that we too might walk in the newness of life.”  Why does he say “newness”   Because “our old self was crucified with Him, that the sinful body be destroyed.” Then having spiritually died to the old man of sin, we triumphantly enter the newness of life, being no longer enslaved to sin, but alive to God in Christ Jesus. We too must all walk in this newness of life.