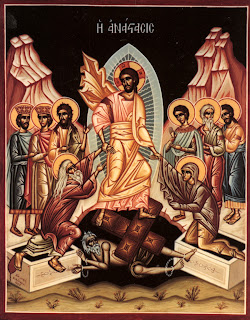 As we begin the period of the Great Forty Day Fast, we must together joyfully bear our personal crosses, permanently separating ourselves from every sin and transgression and taking our mind from unnecessary worldly thoughts, as we cleanse our souls in the mystery of Confession. With our souls purified, we are enabled to focus our hearts and desires on the glorious Resurrection of Christ. Then ponder our own coming death and resurrection which draws nearer with each passing day. It is certain that every man born on earth, will die and rise in the general resurrection, to either a blessed or unblessed life, which unlike this life, never ends. We cannot choose the day of our death which will come, nor can we choose to die and dissolve into nothing, ending our existence, but the continuous future life is a certainty.

When we pass through the door of death, and enter the arena of judgment, then "the books will be opened, and another book was opened, which is the book of life, and the dead were judged out of those things which were written in the books, according to their works" (Rev. 20:12)

Unlike regular books, these books are inscribed with all the good and evil that we have done in our lifetimes, and only repentance and confession in this present life, can permanently eradicate our evil deeds from these books. The books are the conscience of each of us, which records everything and cannot be turned off. We can only read out of our books truthfully, and either vindicate or condemn ourselves, for it is not possible to lie in the presence of God, as He separates the sheep from the goats. If we are innocent then we and the Judge will so declare, but if burdened with sins and transgressions, we and the Judge will proclaim our guilt. This is inescapable, for ("He shall come again in glory to judge the living and the dead") thus it is urgent to prepare for "the fearful day of judgment!" Our Lord Jesus Christ, reminded us, saying about those who fail to repent: " Their worm does not die, and there shall be weeping and gnashing of teeth."

The importance of focusing on the resurrection, is that it follows death, which constantly threatens mankind. Even more, the thought of the resurrection, fills us with hope and joy, as we struggle with our sins and transgressions. During the Great Fast, we celebrate the Resurrection of Christ at every Divine Liturgy, also in the Pre-sanctified we celebrate by partaking of Christ who is risen from the dead. We rejoice in the Resurrection, and we remember His Cross and our own, but we also rejoice in the Fast, for when we struggle to keep the Fast, it cleanses us, from self-will and enables us to obey the command given to our first parents: "Do not eat." Being sinners like them, we have also eaten the bitter fruits of sin and deserve punishment even more than them, for we have been redeemed. The great mercy of God has also descended upon us enabling us to receive forgiveness of sins and transgressions, and live in the Paradise from which they were banned. By patient endurance in His passion, crucifixion and voluntary Passion, His endurance of every evil torment and terrible suffering, the Lord gave up his spirit and was placed in a new tomb. But His soul was different than the souls of men, and His death was different than the deaths of men, and this difference meant that death could not hold him, nor could his body be corrupted. Christ gave us the victory! He put death to death! He snatched all authority and power from the Devil. Utterly defeated, hades and the Devil groaned and moaned, ashamed, defeated and powerless. Through this work, the Godman granted us victory and the great mercy. For the soul of Christ is both divine and human, for He is the Son of God and the Son of Man. Neither His body or soul could undergo corruption, for He is without sin and should never have been put to death, and though He suffered as a man.
Even in our modern world, filled with sin and unbelief and much hatred for Christ, try as they may, it is impossible for anyone to logically demonstrate that the Resurrection of Christ as untrue, for not just by faith but through right reason it is proven to be necessarily true. If one is weak in faith and finds it difficult to believe, like the Apostle Thomas, faith need not be a barrier, for right reason will strengthen weak faith. After faith is reinforced by right reason, Christ will simply say exactly what He said to Thomas: "Be not faithless but believe." Then those of us who are weak in faith will reply to Christ, and with Thomas say: "My Lord and my God!"
The Resurrection of Christ after three days overthrew the pagan world, and this was accomplished not by the world witnessing it, but by the preaching of the humble Apostles. As St. Paul says, the Cross and His glorious Resurrection became a stumbling block for the Jews, but the Gentiles ran to Christ with open arms and tears of repentance and gratitude. They spread knowledge of the true God, Father Son and Holy Spirit, the Trinity in Unity, one in essence and undivided. Indeed those among us who are not Jews, and love Christ, must remember, we were grafted into the Church and the kingdom, for it was not our birthright. Nor should we hold any bitterness against the Jews, but should love them with the love of Christ, for God remembers, them and a remnant will one day, realize that Jesus Christ who came from their race, is the long awaited Messiah or Christ. They will jump with joy and happiness, praising and glorifying, He who is the Son of God and the Son of the Jewess Mary, and they will exalt and glorify His Cross by which He saves the race of man.
What a glorious day that will be, how wonderful when pious Jews adore the Cross of Christ and glorify His Resurrection, for God has not forgotten the Jews, who will again be His people. We who are not the strongest in faith should understand that they lacked the faith of their progenitor Abraham, who obeyed and loved God out of his pure and total faith . From that perfect faith He trusted and obeyed God in everything. When God told him to sacrifice his only begotten son, in whom were all the promises which God made to Abraham, he never hesitated. What a glorious day it will be when the Jews join and sing together with the whole Orthodox world: "Christ is risen from the dead trampling down death by death; and upon those in the tombs, bestowing life."