THE GLORIOUS TRANSFIGURATION OF OUR LORD AND GOD JESUS CHRIST

THE GLORIOUS TRANSFIGURATION
OF OUR LORD AND GOD JESUS CHRIST

ON MOUNT TABOR
On this glorious day of the Transfiguration of Christ, who desires that we all be transfigured into christs like Him. St. Paul teaches that we must strive toward "the fulness of the stature of Christ." He also says: "Let love be without hypocrisy; despise evil; cling to that which is good; have brotherly and family love among you; honor and esteem each other more highly; be diligent and not lazy; be zealous in spirit . . . (Romans 12:9-11). 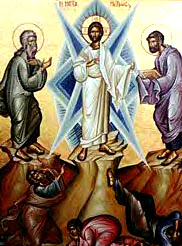 "It is good for us to be here! " Peter uttered these words and laid aside and removed from his mind, the words of Christ concerning what was going to happen to Him. For Christ had previously informed His disciples that He must go up to Jerusalem and be delivered to the High Priests and Pharisees, who would imprison Him and sentence Him to death. Now beholding the glory of Christ he is ecstatically amazed, but "did not know what he was saying, for they were greatly afraid."


Not wanting such a tragedy to happen, Peter "did not know what he was saying, for they were greatly afraid." Peter’s burning love and zealous warmth for Christ was so overwhelming that he, being limited by human reason, did not want anything "bad" to happen to Him. Forgetting Christ’s words about His suffering, imprisonment, torture and crucifixion, he saw the Mount as a firm secure place and so desired to stay there with Christ and not go up to Jerusalem, where the hatred of Jewish leaders would be manifest.


That is why he said: "If you will, let us make here three tabernacles: one for You, and one for Moses, and one for Elias." He also thought of Christ equally with Moses and Elias, not as their Lord and God. Later the Lord would correct his thinking by the following event. Moses and Elias vanished and Christ was alone radiating divine beauty. From an overhead cloud came the voice of the Father saying: "This is my beloved Son in whom I have well-decided, listen to Him."

St. Leo says: "The Father was proclaimed to their ears by the voice from out of the cloud. And hearing this voice the disciples fell on their faces in great fear. And they feared, not only because of the divine majesty of the Father but also because of the divine majesty of the Son; for with their heightened perception they perceived the divinity common to both of them."
Would that we all have the ardent desire and the burning love for the Lord Christ that Peter had, for God is love and He loved us first while we were wallowing in our sins, and without reciprocating His great love, how can we hope to escape the terrible Gehenna and spend eternity in Him, where there He will wipe away every tear and establish us where there is no pain, no sorrow, no bitterness, no hunger or thirst, but life everlasting!. The first and greatest love we have should be toward Jesus Christ, now transfigured showing His divinity, and on His way to be condemned and crucified and buried. But on the third day He will arise never to due again, bringing great joy to all the world! Death has been put to death by His death and we are given eternal life.

On this wonderful Feast Day let us listen to and follow the example of Peter. Peter is falsely exploited by the Papacy and degraded by enemies of the Papacy, but he truly ranks among the greatest of the Apostles, and obediently went to the Cross as a sweet-smelling sacrifice to the Lord, for we do not behold him only as a rock in the structure of the Church, but behold the unlimited love which he bestowed on Jesus Christ. His was a burning love which aroused in him the desire that he would never be separated from his beloved Christ, and he desired that this divine moment would continue without end, saying: "It is good for us to be here!" When we pray and receive the Holy Mysteries, let us be attentive and filled with love and joy like Peter, we will say, it is good for us to be here!