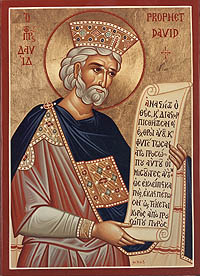 The cry, "Lord have mercy, Lord have mercy, Lord have mercy", is continually repeated in the One, Holy, Catholic, and Apostolic Church throughout the world, being used more than any other phrase, and is repeated in all prayers and services. One of the reasons for this repetition is that it arouses the disposition in our souls to be merciful to others, for we cannot ask for mercy without offering it. In asking God for His mercy, we learn to bestow mercy on others, in accordance with the Beatitude: "Blessed are the merciful for they shall obtain mercy." The other reason is asking God for mercy, places us under His Son who alone brought His great mercy into the world, making it available to all.

Why do we ask God for mercy and what is the mercy that we seek, it is very important to know where we stand, how can we aware that we have received His great mercy?


For everything done between God and us is accomplished by synergy. The following facts will answer these questions. God is just, and His perfect justice cannot fail but to give everyone what he deserves, without respect to person or rank.

The first man, created from the earth, fell into disobedience by violating God’s law with a single sin, teaching us that the smallest sin is deadly and will lead to bigger sins. At the time, before the fall, he was not under God’s mercy, because he was pure and sinless, and honored with companionship and dialogued directly with the Lord. He was subject to one law, and was given permission to eat of all the trees in Paradise except one. The law is clear: "Do not eat of the tree of knowledge of good and evil, for in the day that you eat you shall surely die."

But when Eve and then Adam chose to eat, it was their free decision whether to eat or not to eat. By eating, and breaking God’s commandment, they effectively rejected God as their friend, teacher and guide. Eve was beguiled first by the serpent, and who, out of malice, assured them that they would surely not die, but would become like God. Then she seductively gave some to her husband, so they both ate, and in breaking the law, they broke the bond of friendship and dialogue with God, and the serpent, having succeeded in his efforts, then increased his malicious actions against man, whom he hates as being God’s own image. He would spread his venom, a deadly poison, for his doctrine is death to man. He then began to strive for the transformation of all men into his evil image.  With his first action, His power increased even more, and because death is undesirable, Satan began to rule over men through the fear and threat of death. This sparked and continues to spark crimes of all sorts, murders, clan wars, revolutions, and war between nations.
When Adam and Eve were cast out of Paradise, they wept bitterly, pouring out fountains of tears after realizing what they had lost. Sweet paradise, sweetest Paradise! What have we done to ourselves? Their suffering began and their lament was endless. Woe to us! Now we are cast out and do not enjoy the beauty of Paradise! But they entertained a slight inner hope of restoration, for God taught them to offer up sacrifices for their sins. This hope began to change their despondency into an everlasting lament and prayerful cry. For while enduring their suffering and despondency, the first created pair began an inspiring and everlasting song, which we have never stopped chanting until this day: "Lord have mercy upon us."

God’s fulfilled His task, and His perfect justice, unlike man’s unjust justice, carried out the sentence of death. Both Adam and Eve died as have all men since then. For through death sin entered the human race, and sinful man cannot escape the bitterness of death. Clearly, God acts, not out of anger or revenge, but always out of perfect wisdom and love, however he cannot be unjust and forgive them, then return them to Paradise as a reward for their transgression.  God’s plan also proceeds exactly as He decided as regards the human race. His magnificent and glorious plan is all about us! He expressed his plan prior to the creation of the first man, saying: "Let us make man in our own image and likeness . . ." 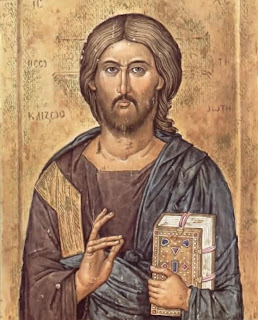 In the fullness of time, the man of God’s plan, who is the perfect image and likeness of God was born to the Virgin Mary in Bethlehem of Judea – our Lord Jesus Christ. He came to destroy the malicious work of the serpent, to save the race of man and rescue many in Hades, and to offer all mankind the greatest gift that can be expected – His great mercy. He would accomplish this through His voluntary Passion, insults, mockery, spitting, being crowned with thorns, the purple robe of mockery, lashings, and crucifixion, crying for water they gave Him vinegar which was followed by His voluntary death.
But being the Logos of God incarnate, He is the Author and Giver of life. It is impossible to put divine life to death. Instead life is poured out from Christ, deathis put to death by His death, He bestowed on the human race, not this temporal life, but much more desriable -- everlasting life.  Jesus Christ was unjustly put to death, and by enduring death He destroyed the dominion of death. In His Resurrection, He raised up joyful Adam and Eve, taking them out of the miserable condition of pain and suffering into eternal life. Dancing and singing were heard throughout Hades as the Light of Christ, even brighter than the sun, filled Hades and those who accepted Him with great joy. The Mercy of our God, gives all of us, in all ages and in all the world, that which we do not deserve.

We are baptized by triune immersion, in the name of the Father, and the Son, and the Holy Spirit, and have received the seal of the Holy Spirit and partake of His Body and Blood, and after all this we have sinned again. This is the earnest motivation behind our repetitive cry and lament: "Lord have mercy!" This cry will never cease until the day of judgment. David the Psalmist, after greatly sinning in an adulterous relationshipl followed by murder, went into the wilderness, covered himself with sackcloth and ashes, and as tears gushed forth he cried:  "Have mercy upon me O God according to your great mercy, according to the multitude of your pities, wipe away my iniquities!" (Psalm 50) 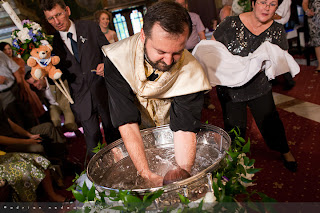 If we truly seek God's mercy, we will receive it, the fruit will be evident. It consists of grace from on high, with the forgiveness of all our sins, through holy confession, we will begin a life of prayer, keeping the fasts, holding firmly the doctrine of the Church, partaking of the Body and Blood of the Lord, becoming humble-minded and meek, putting away anger and resentment, and entering the ascetic struggle to become His own image and likeness. Christ the Godman, led the way for us to follow, "Learn from me for I am meek, and humble in my heart." and we glorify Him for He has granted us the great mercy! Our lives are more than food and drink. There is no higher goal in this life, no greater reward, no other wealth, no more noble honor, than the struggle to be holy as Christ is holy,, and to aim for the perfection of God the Father. Amen.