FIRST ABOUT DEFENDERS OF ORTHODOXY

Orthodoxy is the  divine-human Body of Christ, was founded by our Lord Jesus Christ and is guided by the Holy Spirit whom He sent from the Father to both comfort and  remind His followers of all that He had taught  them.  There is no other entity like the Church because it is headed by the Godman. Therefore we cannot possibly  examine the Church and speak of it or its members as if it were a secular organization.  The Church is the source of all truth and the fountain of holiness which sanctifies our spirits, souls and bodies. It is unique and remains far above everything else, the holiest place on earth. For the Church’s members are vessels of Holy Spirit. 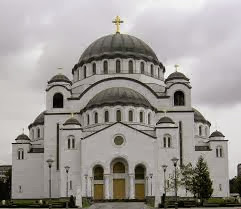 Some people have been heard to address members of the Church as being either liberal or conservative, but these are misnomers which cannot be inapplicable to defenders of truth.  In Orthodoxy liberal or conservative factions do not exist, because there are only extreme viewpoints in one direction or another. We completely believe Christ is God or we deny Him. We believe, not on multiple churches, but only  “in One Holy Catholic and Apostolic Church or we believe in no church. Either we keep every commandments, preserve all sacred tradition and respect all holy canons or we don’t.  Christ says that if you break one of the least of these commandments you break them all, the same is true of truth, denying one truth, is denying all truth, for Christ is the Truth from heaven.


Those who have not cleansed their souls from sins should not be investigating the canons and commandments, until they correct their lives, for these are holy things.

Above all else, the most important thing is that we seize education and  correct and sanctify our lives on a daily basis, by prayer, fasting and almsgiving.  We must strive to learn, not to be opinion minded but to develop one mind – the mind of Christ, and this will attract grace which will fill our souls with wisdom and great joy. We must love truth above all, as we strive to be of one heart in the love of Christ. Christ must be the center of our lives; and he alone is worthy of preeminence.

As Orthodox Christians, we cannot form our own opinions concerning spiritual matters, especially dogmas and truths, which is obvious to those who know of heresy in the history of the Church. The word “heresy” means an opinion, and those who have opinions contrary to the Church, are called heretics.  Most heretics arise in the Church and always seek to spread their heresy, and if they persist, will eventually be cast out from the Church. The heretic Arius, was condemned and put to shame by the Lord, for he held the opinion that Christ was not true God, did not exist with the Father before time, nor is he of the same essence as the Father. He aroused turmoil in the holy Church, which  prompted St. Constantine the Great to call the Synod which became known  as the First Ecumenical Synod, wherein Arius and his followers were condemned along with their blasphemous heresies.  At this First Synod,  Great saints rose up to battle against the heresy of Arius, among them were Athanasios the Great, Alexander Patriarch of Constantinople, Nicholas of Myra, Paphnutios, and Spyridon the Wonderworker, Macarios the Patriarch of Jerusalem. 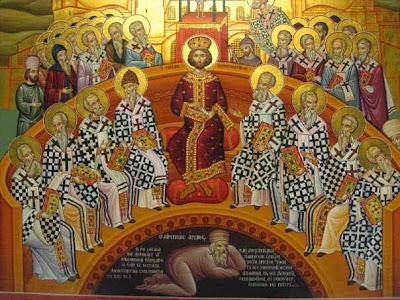 How important are the dogmas of the Church? They are not subject to negotiation because truth is not ours to bargain with and going against truth would cause us to betray the Lord and ally ourselves with the high priests, the scribes, the pharisees and Judas Iscariot. The dogmas which we believe, define Orthodoxy against cacodoxy and among them are:  God is One in Trinity, the Three are one and the one is Three, there is one nature, one essence, and one will in the one God, Father Son and Holy Spirit, the Trinity is one in essence and undivided.  The Son is both God and man, born eternally from the Father and in time as a man from His Mother the Ever-virgin Mary. Because the nature is passed on through birth, the Son, having two births, also has two natures and two wills, being the Godman. To deny or oppose a single Orthodox dogma is worse than any sin of the flesh.

Concerning the Church the important fundamental dogma is the belief that Jesus Christ is the Son of God.  It would be preferable to have our hands cut off and our body burned than to deny a single dogma, which would separate us from the Lord.  Millions of martyrs preferring death to denial, surrendered their lives, and suffered torment in defense of the truths.  Please give close attention to the following words of  an enemy who dwelled within the Church  his words of betrayal are italicized. 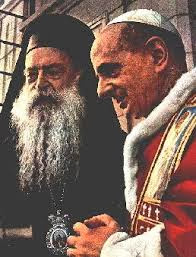 “We have already achieved unity with Protestantism, whereby we constitute an allied force of 350 million individuals with regard to purely ecclesiastical issues.”2

“We are deceived and we sin, if we think that the Orthodox Faith came down from heaven and that all other creeds are unworthy.  Three hundred million people have chosen Islam in order to reach their god, and other hundreds of millions are Protestants, Catholics Buddhists. The goal of every religion is to improve mankind.”3 Note: This is the belief of all Freemasons)

“But they tell us there many differences (separating Orthodoxy from the Papacy). What differences? The filioque?* It existed since the seventh century, and the churches didn’t separate. Primacy and infallibility?  What do we care about them. Let every church maintain its own custom. . .  Besides we all think we are infallible – in our work, in our thoughts, in everything. Does your wife ask you how much salt to put in the food? Certainly not. She has her own infallibility. Let the Pope have his. We don’t want it.” 4

What St. Photios the Great said about the filioque addition to the creed:
* He considers the addition to the Creed by the lawless Papacy as unimportant. Photios, Patriarch of Constantinople says: “Can Christian ears tolerate such things? They who dare to blaspheme, do they not arouse in Christians to both wrath and grief, feelings that are generally unconjoined?  Wrath, because they have adopted such foolishness; grief, because they by themselves have slid headlong into destruction; for piety, even if wroth, does not lay aside piety for its fellow man.

(Photios the Great, Mystagogy of the Holy Spirit, p75)

“The ice has broken between our churches (Orthodox and Roman Catholic). I have always dreamed of meeting the Pope, who is truly a great hearted man.  May the day of our meeting be a great day for Christianity and for the whole of humanity. I am going to meet the Pope and embrace him in a brotherly manner.” 5

“We prayed together, we recited together the “Our Father” in Greek and Latin, as we had already done with his holiness the Pope in Jerusalem. It is truly amazing that we are able to remain separated for such a long period. Today a new era is beginning for Christianity.” 6

Italics are from Patriarch Athenagoras of Constantinople

The words in italics are quotes of the unfortunate Patriarch Athenagoras, who boldly betrayed the Church, with his heresies, he not only failed to defend the truth, but tossed out all Orthodox truths and dogmas, and in his own words he said: “Let us put them (the divine dogmas)  in a closet and proceed with love.”  He went even further, he denied his own bishopric to which he was ordained. For the main function of a bishop was, become like Christ, and to preserve the faith even with his blood preaching to all the faithful and to all the world as well, for preaching the saving Gospel of Orthodoxy, and upholding all the dogmas of the Church, the Bishop must protect the sheep (Orthodox) from the wolves (the Papacy) The Popes are certainly heretics, but they despise us, who keep the true Faith, calling us defective because we don’t bow down and kiss his ring and his foot, or address him as the Holy Father.  They find a single fault in the Orthodox, that “we do not have him as our head.” We have Jesus Christ as our head, the Pope demands that we abandon Christ and have him as our head. Athenagoras as bishop and patriarch Athenagoras’ had a single function, to do the exact opposite of what he did in his life. He denied Christ as the Head and the Church as His Body, but admired the Pope and honored his heresies. He turned the Papacy’s supreme arrogance into a joke, saying “Let him have his supremacy and his infallibility!  He shored up the very foundation of the Papacy, never suggesting that they were in error and had seized the authority of Christ. The Patriarch should have championed the true faith. He should have praised the Saints who delivered us from the greedy clutches of the Popes, as did St. Photios the Great and St, Mark of  Ephesus, instead Athenagoras chose to denounce their truths, and embraced the Pope as his brother, leading many astray. He also demotes Christ by  expressing his ardent desire to unite Orthodoxy under the authority of the  Pope. He casually finds no fault and embraces the Popes’ primacy and infallibility.
We cannot remain Orthodox and do what we desire; we must preserve the dogmas handed down to us from the Apostles and the Fathers, and pass them on to our progeny. To betray the dogmas is to betray Christ, our Master and Head.  Patriarch Athenagoras betrays the Creed wherein we express our firm belief in One Holy Catholic and Apostolic Church, – in Holy Orthodoxy –  and one baptism for the forgiveness of sins.  May our Lord, through the intercessions of the Apostles, Holy Fathers and Saints, guide us and preserve us in truth and preserve the Holy Faith of Orthodox Christians. We pray also that the Holy Spirit will guide us into the truth and comfort us in tribulation and distress.
Posted by Unknown at 2:17 PM