This treatise will make anyone’s Christmas more beautiful,
looking to the future of the Child lying in a manger,
for He is the Truth that came down from heaven!

Christ’s death upon the Cross, His burial by Joseph and Nicodemos in a new tomb, where no other body had ever been placed, and His Resurrection on the third day after the crucifixion, are three great historical events, bound together and inseparable, whose historical truth no one can deny or doubt,
unless he has lost all logic and reasoning. 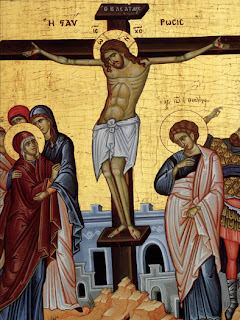 Christ was crucified in Jerusalem by the high priests and elders of the Jewish people on the day of the Jewish Passover sacrifice, and His crucifixion is a historical event which no one can deny or doubt, for the first who bore witness that Christ did indeed die which was their desire, this being a work of their own hands.  Their cries of: “Away with Him! Crucify Him!” still are clearly recorded in Holy Scripture, and to this day the Jews believe that He deserved to die.  Also they persecuted the disciples of Christ, then called, Nazarenes, for believing in the crucified one! 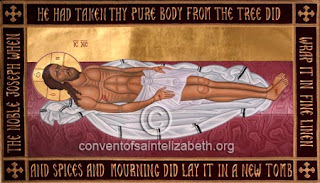 Soon after His death, Christ was buried by Joseph and Nicodemos, through permission from Pontius Pilate, the Roman governor of Judea. The next day the chief priests and Pharisees, having obtained permission from Pilate, went to the tomb, saw the dead body within, and sealing the tomb with a large stone at the entrance, they went away. That He died and was entombed is their strong testimony leaving no doubt. They left behind at the tomb a guard of soldiers supplied by Pilate, to watch the entrance to be certain that His disciples did not come, steal the body,  and declare that He is risen from the dead.  Until our days, no one ever expresses doubt that He died and was laid in the tomb.

This same tomb still exists in Jerusalem and from it every year at Pascha, under heavy watch by local authorities, the patriarch of Jerusalem, goes into the tomb, and obtains the miraculous Holy Fire, which during the first few minutes does not burn, as people put it to their hair or beards. 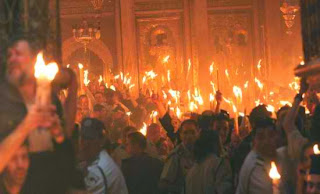 All lights in the Church are extinguished, then when the Holy Fire appears miraculously from the tomb, it dances around as a cool blue flame lighting all the lights in the church without human assistance, for this is an uplifting holy event. The patriarch then passes the miraculous light to the excited crowds who witness this event every year. The divine fire alone is a striking testimony, for the miraculous fire coming from the tomb supports the truth of the resurrection. This divine fire shouts to the Jews, come and believe in me whom you crucified, and save your souls, for all the Prophets told you I, your Messiah, would come  bringing  you gifts of truth and life.

AFTER DEATH AND BURIAL – RESURRECTION!

After these two universally acknowledged and indubitable events comes the third and glorious event of the Resurrection from the dead, which is the work of God’s almighty power, which took place during early dawn on the third day, according to the record of Matthew and other Evangelists.
The hymn of the Church describes the scene. 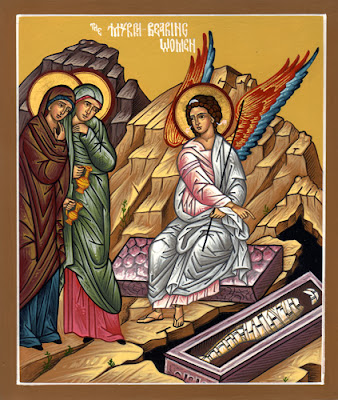 “The women disciples of the Lord went to the tomb of the Lifegiver; there they found an angel sitting upon a stone, and he cried to them and said: Why seek the living among the dead? Why mourn the Incorruptible amid corruption, go and proclaim it to His disciples!”

In Orthodox churches throughout the world, on the night of Pascha, the atmosphere is electrified  and filled with light accompanied by the joyous outcry of men and angels with the certainty of our total confidence in the resurrection:

“Christ is risen from the dead trampling down death by death and upon those in the tombs bestowing life!”

However, this event was from the beginning was openly denied by the slayers of Christ, who were conscious that they were lying to conceal the truth which otherwise might have spread among the people and thus expose themselves to dangers as His slayer for they cried out demanding his death.  For after the Jews were informed by the guard of Roman soldiers which they had secured, they learned from these soldiers the truth of Christ’s resurrection, for the soldiers were aware of what happened,  so they decided to bury the truth with their lies.  They then gave silver to the soldiers to lie and said: “Say it like this:  that you had fallen asleep, and someone came by night”  and stole the naked and dead body of Christ. The lying guards were in danger of death by the government for admitting that they had fallen asleep while on guard duty – a major serious violation of duty. That is why the Jews told  the soldiers: “If this comes to the governors ears, we will persuade him and rid you of any care.”

The soldiers did as they were advised, and those who spread the lie of His stolen body, spread this among all the people and it reached Pilate’s ears, whereby Pilate was also convinced that Christ did rise from the dead, and proof of this is that he left the soldiers unpunished, nor did he punish the disciples who allegedly, interfered with a military function by  stealing the body which they were  the soldiers were assigned to guard, and this shows that Pilate knew for a fact, that Christ did indeed rise from the dead. In the lie and coverup is found the certain evidence of the glorious resurrection of Christ.

The facts that no punishment was imposed on the “sleeping guards,” and the additional fact that the disciples who “stole the body” were not prosecuted, remains as two reliable witnesses, and they censure the falsehood disseminated by the Jewish council.  They demonstrates that those guilty of Christ’s crucifixion and the deniers of Christ’s Resurrection were safely informed of this truth. For these reasons, the event of the resurrection is equally authentic historically, as the two events before and after and indissolubly related to it – the burial and crucifixion – and no one who accepts the death and burial of Jesus as historical incidents can deny His resurrection, testified to fully and accurate historically.

Jesus was crucified by His enemies, buried by His friends, and resurrected by the power of God His Father, for He was truly the Son of God, who came down from heaven. If He did not come down as He said,  as the Son of God, this being the reason He was condemned to death, He would not have risen from the dead. However, by doing so He proved that He is the Son of God.  The eternal truth that Christ, is indeed the divine Logos and Son of the Father is just as authentic as the truth of His Resurrection.

Why then the unbelief? The death of Christ on the Cross is the work of human hands.  The Resurrection of Christ is the work of God’s power.  Failure to believe these truths is the result on ancestral sin, which inclines them to disbelieve in the saving truth, but to readily believe in the opposing falsehood. Sin always prevents belief, for believing means responsibility, while responsibility means a change from sinfulness to sinlessness.  For example, an atheist who cannot be  convinced intellectually that there is a God. Being guilty of many sins, he assures himself that there is no God and no judgment, however if you could convince an atheist to stop sinning and to regret his misdeeds, he would immediately begin to believe.  Not the intellect but sin is the great wall between God and man, and Christ will tear down that wall with His power for all who believe in Him. THE RESURRECTION OF CHRIST

Through Christ’s Resurrection, God worked toward the resurrection of  men who had fallen into misery and death.  God works toward the building of a new world, eternal, glorious, immortal all being partakers of his blissful life and all the blessedness of God, and this work is foretold by the Prophets of God, as destined to take place at a certain time, and  is preached by the Apostles, who began to preach with the death and Resurrection of Christ.

The glorious third day Resurrection of Christ assures us of this most important thing, that we too will arise and be with Him forever.  Once a man believes in the resurrection and the beauty of the resurrected Christ, his whole life changes for the better, for there is nothing equal to complete faith in Jesus Christ. Deep down man usually seeks for something better in his life, something good, especially in his youth, when he begins to see the injustices of the world. Unknown to many is that Christ is the only life and the only good for which men seek.

As we celebrate the birth of Christ, let us look ahead to His saving Passion and the terrible suffering which He endured out of His great love for man. Let us look at the Logos incarnate in the manger and hear Him saying: I am your God who created you and you have sinned against me. But I will wash you and make you whiter than snow! I am here to give you life and that abundantly. I am here to teach you, to suffer and die for you, and so free you from death. I am here who alone am the resurrection and the Life of all men.  Happy and blessed are all of you who place their trust in me, for your life in this world will be transformed into pure joy, and when you depart from this world, you will with great exultation  hear my voice: “Come into the joy of the  resurrection all you blessed ones!"
Posted by Unknown at 6:58 PM