THE OLD CHURCH IN THE NEW WORLD – 3

THE OLD CHURCH IN THE NEW WORLD – 3

SOME REASONS WHY ORTHODOXY CAN NEVER UNITE WITH THE PAPACY

SYNOPSIS OF THE LIVES OF POPES
continued: 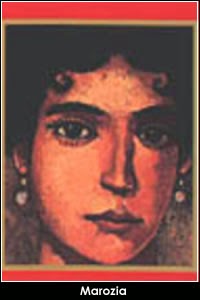 In the tenth century Rome was controlled by the licentious Theodora, her daughter Marozia and her son of the first marriage Alberic II. From 904 to 963, they placed their lovers and children on the  throne of the Holy See. In 931, Marozia’s son who acknowledges Pope Sergius III to be his father, and who was only twenty years of age, was given the tiara, and assumed the name of (Pope) John XI.  This profligate youth surpassed, if it were possible to surpass, his predecessors in his utter disregard, not merely of religion, but of the commonest forms of morality.  Truth, honor, decency – were all shamefully defied.  Hardly a vice can be named or imagined of which he was guilty. The gold and silver vessels belonging to St. Peter’s were given as presents to his mistresses and other companions in sensual pleasure.  The female pilgrims who visited Rome were decoyed to the Lateran and ruined; the treasure of the See were squandered away in gambling of every kind. The very show of divine worship was abandons altogether. Or indecently hurried through, and the audacious Pope did not scruple publicly to invoke pagan deities, and mockingly to drink at his revels to the health of the devil.

Such was the character of Pope John XII, as portrayed by the Romanists themselves. Listen to what Dr. (Karl) Brandes, who is a Roman Catholic, says about this Pope: “In the person of this grandson of Marozia, the papacy was reduced to its deepest degradation, and Rome to its depth of dishonor and humiliation.” Finally this Pope was deposed by a Council for his licentiousness and other crimes, which would fill a volume, if we were to insert them one by one" and yet our brethren, the members of the Roman Church, unblushingly still call on us to believe that this wretch was a legitimate successor of self-denying Peter and Paul and as above all, that he was infallible.

Pope Otto the Great was succeeded in 953 by two rival heads of the church, namely Pope Boniface VII and Benedict VII.  The opposition between them was absolute. The Pope of one party was the antipope of the other. What one authority decreed the other strictly forbade. Pope Benedict excommunicated Pope Boniface, and the latter returned the compliment, yet, both of them held the power of binding and loosening, ordained priests and bishops, and bestowed blessings as the Vicar of Christ, etc.

One of these rival Pontiffs, Vicar of Christ and the successor to the fisherman St. Peter. Pope John XIX, had never been a priest at all; he was Duke of Rome and seized the Papacy by force. On his death in 1033, the Count of Tusculum elevated to the chair of St. Peter a boy of their family, not quite twelve years of age, and gave him the name Benedict IX.

As soon as this Pontiff arrived on the verge of manhood, he recklessly plunged into every species of debauchery and crime. No expenditures was too lavish, no act was too daring, that would serve to gratify his passions. All that has been related of John XII might be repeated of Benedict IX and the whole would not be told. The former was a voluptuary, the latter was a voluptuary and a tyrant. To licentiousness he added ungovernable fury and anger, and committed several murders with his own hands. The chroniclers of the age, wearied or disgusted with their task, are fain to sum up the catalog of his enormities in a few words by declaring that the details are too horrible to relate.

Retired Pope Benedict XVI declared that the Orthodox have everything but are wounded, because they do no have ME.

Supreme arrogance is not a trait of Christianity but of this fallen world.
Posted by Unknown at 5:23 PM