BAPTISM BY TRIUNE IMMERSION – COMMAND FROM THE KING OF ALL! ONLY ONE BAPTISM

BAPTISM BY TRIUNE IMMERSION – COMMAND FROM THE KING OF ALL!
ONLY ONE BAPTISM


After His glorious victory and Resurrection, Christ appeared to His disciples as the conquering King of heaven and earth, and He gave His disciples their “marching orders, to save all men who responded to their call for faith and entrance into the saving waters of triune  baptism. The Apostles listened intensively and then responded:  “And Jesus came and spoke to them, saying, all authority has been given to me in heaven and on earth. Therefore, go and teach all nations, baptizing them in the name of the Father, and of the Son and of the Holy Spirit; teaching them whatever I have commanded you; and behold, I am with you to the close of the age” (Mat. 23:18-20).  They did just that as they taught them, and baptized them by three immersions in the name of each of the Holy Trinity, Father Son and Holy Spirit.

1. Teach all the nations
2.Baptize them
3. Christ never leaves us 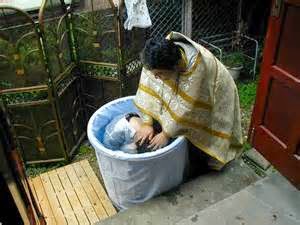 The Apostles, doing as they were instructed and taught this to those who came after them. The Gospel became like a roaring fire, consuming the old world of idolatry and the gates of Hades gave way. The Apostles also passed on to them, that which they received,  the gift of the Holy Spirit by the laying on of hands.  Only in the original Church founded by Christ, is this triune immersion baptism preserved.  And no other baptism is a triune baptism.  The Apostles, who understood Christ’s teaching left the following Canon: The presence of the Holy Spirit in Orthodoxy is well known to both Orthodox and many heterodox.

“If any Bishop or Priest does not perform three immersions (baptisms) in making one baptism, but only a single immersion (baptism) that given into the death of the Lord, let him be deposed. For the Lord did not say, Baptize into my death, but, ‘Go you and make disciples of all nations, baptizing them in the name of the Father, and of the Son, and of the Holy Spirit’” (Matthew 28:19).


In Baptism Christ’s teaching concerning being reborn again from above is enacted. For in triune Baptism we symbolically undergo death by being immersed into Christ’s death and then arise in His resurrection upon coming up out of the water, which is clearly defined  in the Baptism epistle as follows:

“Brethren, do you not know that all of us who have been baptized into Christ Jesus were baptized into His death.  We were buried, therefore, with Him by baptism into death, so that as Christ was raised from the dead by the glory of the father, we too might walk in the newness of live.  For if we have been united with Him in a death like His, we shall certainly be united with Him in a resurrection like His.  We know that our old man has been crucified with Him so that the sinful body might be destroyed, and we might no longer be enslaved to sin.  For he who has died is freed from sin. But if we died with Christ, we believe that we should also live with Him. For we know that Christ being raised from the dead will never die again, death no longer has dominion over Him. The death He died He died to sin, once for all, but the life He lives He lives to God.  So you also must consider yourselves dead to sin and alive to God in Christ Jesus ” (Romans 6:3-11).

Baptism and Chrismation are two distinct mysteries to be received by every soul that enters the Church.  Baptism that wipes away all sins is found only in the Orthodox Church, for God will not sanctify the sacraments of those outside. Unfortunately to day this practice is not in use, but this will one day change.

What is a person comes into the Church without baptism, can he be baptised after receiving chrismation? Absolutely,  and the answer is in the tradition and in Holy Scripture. We read in the Acts of the Aposles that when Peter was teaching the centurion Cornelius about Jesus Christ, suddenly the Holy Spirit came down upon Cornelius and his company. They were anointed from heaven (chrismated) with Holy Spirit and Peter spoke saying: “Can any man forbid water that these should not be baptized which have received the Holy Spirit as we have? And he commanded them to be baptized in the name of the Lord” (Acts 10-24-48).

BAPTISM OUTSIDE THE CHURCH

There are contrary opinions regarding baptism outside the Church which is not possible. Legitimate Priests are necessary  and there is no legitimate priesthood outside the Church. You need tp call down the grace of Holy Spirit to sanctify the waters, ridding them of demons which is unavailable among heretics. The Lord commands us to separate from heretics and will not himself supprt or sanctify their errors.

THE OLD AND NEW WINESKINS

We can apply here the words that Jesus Christ speaks in the parable of the wineskins (mistranslated  “bottles”), Jesus says:  “No man puts new wine into old wineskins, else the new wine will burst the wineskin and be spilled, and the wineskins will perish.  But new wine must be put into new wineskins and both are preserved."  (Luke 5:37-39).