THE PAPACY – EMBRACING HER IS DISASTER AND BLASPHEMOUS 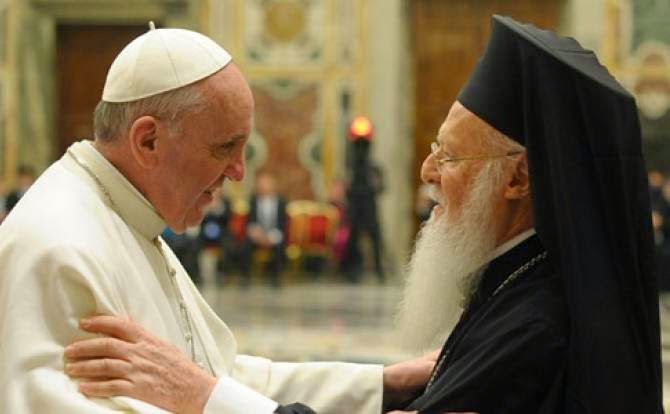 Why does the  pope appears to be so friendly and exactly what are his motives?  He certainly does not want to become Orthodox for he believes that he is the vicar and infallible head of the Church of Christ, and he cannot  deny his primacy and infallibility, then what is his purpose in conducting meetings with Orthodox and others?  The answer lies in his thirst for universal domination of all Christians. He wants to swallow up the Orthodox, which is the objective of the papacy, rule over them  placing them under his dominion like the apostate uniates, who left Orthodoxy and commemorate his name. All he wants is recognition of who he is not, the head of the church and the only representative of Christ on earth.

Sadly, we forget, but God and the victims never forget, the many crimes committed in the name of Jesus Christ by the papacy.  We Orthodox confess ourselves as being the Body of Christ and His holy Church, Why then do our upper leaders embrace and keep company with the very same inimical organization, whose past is stained with human blood.. Not only through their killer Crusades, but also through their demonic Inquisitions wherein they slaughtered myriads  and myriads

The Pope is not the Roman Papacy, for he comes and goes as its temporary head. Their claim that there were good and bad popes means nothing.  The crimes committed are by the organization called the papacy.  Popes claim to represent Jesus Christ.  How could anyone believe this when Christ is the humble and meek Godman who did only good, healing the sick, gave sight to the  blind, cleansed lepers and raised the dead. They cannot possible represent  Christ for Christ did not send out bloody crusades, nor did he conduct murderous inquisitions against opponents.   Here are a just a few of the tools which the papacy used against those who disagreed with them in their horrible inquisitions. If anyone says, well that was some time ago, they would like to forget but God never forgets, for every crime they committed is in the books of life and death. Take thought of the horror of the tools used by them and think – do we want to be their friend and fellow traveler?  Do we want to exalt those who debased humanity by their actions?  God does not forget.

These vicious tools were used by the inquisition against their own people.

The Iron virgin was a hollow metal case with knives inside, which pierced the victim placed in it
Tools to gouge out eyes
Forced to jump off cliffs onto sharp spikes below

"Making every allowance required of a historian and permitted to a Christian, we must rank the papal Inquisition along with the wars and persecutions of our time, as among the darkest blots on the record of mankind, revealing a ferocity unknown in any beast."
(Will Durant,,  The Age of Faith p 784)

Let us heed the words of St. John of Kronstadt, who fell asleep in the Lord in December of 1908

“The holy men of God would not betray the faith by even so much as a word, and if it did happen that because of the cunning of the persecutors, they unawares betrayed it by either word or deed, they were ready to wipe away their sins by means of suffering.  See how strictly the Saints held to the right confession (of faith)! And of what sort are present-day Christians?  They are  “Reeds shaken with the wind” (Matt. 11:7).   (Page 325)

“Receiving the end of your faith even the salvation of your souls" (1Peter 1:9). Behold, the end and goal of the Orthodox Christian Faith – the salvation of the soul of every believer.  How invaluable is our faith; how holy, true, God-pleasing, powerful, saving!  How necessary it is to love Her, worthily to esteem her, constantly to utilize her for one’s own salvation and that of others. O Lord, save the race of Orthodox Christians, and convert all the non-Orthodox too Orthodoxy, as to the one faith which saves, established by you, glorified by you, and to be eternally glorifies by you!  You are holy and righteous – and your Faith is holy and righteous.” (Page 325)

“What does the rite of conversion from different beliefs and confessions and of being united to the Orthodox Church demonstrate?  The indispensability of the rejection of false beliefs and confessions – of repentance for all the former sins and of the promise to God to keep and firmly confess the blameless faith, to guard against sins and live in virtue.”   (Page 325)

“Do you suppose that I came to bring peace on the earth. I tell you, no; but rather division; for from henceforth there shall be five in one house (the Church of Christ) divided, three against two and two against three” (Luke 12:51-52) If to anyone, it is always possible to say to the Roman Catholics, Lutherans and the Reformed: “You know not what kind of spirit you are of” (Luke 9:55) (Page 326)

“A hatred of Orthodoxy, fanaticism against and persecution of the Orthodox, even killings, run like a crimson thread through all the ages of Roman Catholicism’s existence.  By their fruits you shall know them. Was such a spirit commanded to us by Christ? If to anyone, it is always possible to say to Roman Catholics, Lutherans and Reformed: “You know not what manner of spirit you are of”  (Luke 9:55)

“The popes and the papists have become so proud and have exalted themselves that they have thought to criticize Christ Himself, the hypostatic Wisdom of God Himself, and have extended their pride to the point that they have distorted some of His words, commandments and ordinances, which should not be altered to the end of the age. For example, his statement concerning the Holy Spirit, His commandment concerning the cup of His all-undefiled Blood, of which they have deprived the laymen, setting at nought the words of the Apostle Paul: “For as often as you eat this bread and drink this cup, you do show the Lord’s death until He comes” (1 Cor. 11:26).  Instead of leavened bread in the Liturgy, they use wafers” (Page 327)

Life in Unfailing Union With the Church.
The indispensability of Belonging to the One True Orthodox Church.

Thus it is indispensable to belong to Christ’s Church, the Head of which is the Almighty Tsar, the Conqueror of Hades, Jesus Christ Himself.  His Kingdom is the Church which wars with principalities, powers, the world-rulers of the darkness of this age, with spirits of wickedness in high places, which compose a skillfully organized kingdom, and do combat in an extremely experienced, intelligent, well-directed and powerful manner with all men, having well studied all their passions and inclinations.  Hence no man himself on the battlefield can be a combatant; and even a great community which is not Orthodox, and is without the Head – Christ – can do nothing against such cunning, subtle, constantly vigilant enemies, who are so skilled in the science of warfare.  For Orthodox Christians a mighty support is necessary from on high, from God and from Christ’s holy warriors who have defeated the enemies of salvation by the power of the grace of Christ, from pastors and teachers, and then – from common prayer and from the Mysteries.  Behold, precisely such a helper in the struggle with our invisible and visible enemies is the church of Christ, to which, through God’s mercy we belong.

The Roman Catholics have invented a new head, having demoted the one true Head of the Church – Christ.  The Lutherans fell away and remained without a head.  The Anglicans (Episcopalians in US) likewise. There is no Church among them; the union with the Head is broken; there is no Almighty help and Ball wages war with all his power and cunning, and holds them all in his delusion and perdition. A multitude perish in atheism and depravity.”  (Page 322)

“The holy Church is God’s most supreme, most holy, most good, most wise and necessary establishment upon the earth. She is “the true tabernacle” of God which the Lord pitched, and not man. (Heb 8:2) – not Luther, not Calvin, and Mohammed, nor Buddha, nor Confucios..”   (Page 313)

“The most harmful thing in Christianity, in this God-revealed, heavenly faith, is the leadership of one man in the church – for instance, the pope, and his supposed infallibility.  It is precisely in the dogma of infallibility that the greatest error is contained, for the pope is a sinful man, and O the disaster if he fancies himself to be infallible!  How many great errors, destructive of the souls of men, has the Catholic, papal church thought up – in dogmas, in rites, in canonical rules, in the divine services, in the deadly and malicious slanders against the Orthodox Church, in reviling directed against Orthodox Christians!  And of all this the professedly infallible pope is guilty, with his and the Jesuits’ teaching, their spirit of falsehood, duplicity, and every sort of unrighteous means ad maiorem Dei gloriam (for the – alleged – greater glory of God.”     (Page 315)
Posted by Unknown at 4:15 PM