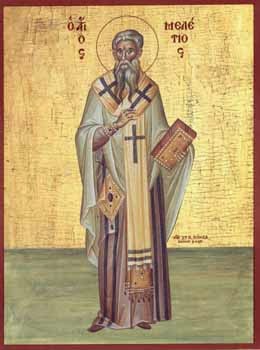 St. Meletios the Great, Archbishop of Antioch, celebrated by Orthodox Christians on February 12, flourished in the fourth century. He became Archbishop in 360 AD, and met a young man, John Chrysostom. Their  acquaintance profoundly affected the character of young Chrysostom who at that time had entered a class of catechumens; after three years of instruction, he was baptized by Archbishop Meletios at the age of twenty-three. In 370 AD. St. Meletios ordained young John Chrysostom first as Reader and later as Deacon. The Saint also ordained St. Basil the Great as Deacon.

St. Meletios, being an outstanding defender and interpreter of holy Orthodoxy, zealously spent his life fighting against the Arian heretics who blasphemed against the Holy Trinity. Many Arians nourishing the bitterness of their heresy in their hearts began an ingenious slander campaign hurled against the Saint, even accusing him of being a Sabellian. The struggle between the Orthodox and the heretics was so bitter, that when the Saint was preaching in a church the doctrine of the Holy Trinity, his own deacon who had embraced the wicked Arian heresy, ran up and put his hands over the Archbishop’s mouth to prevent him from continuing his sermon. Meletius then began to preach using his hands; first he opened three fingers and then his fist he represented the one God in trinity. Eventually St. Meletios was driven from his Archbishopric throne by the persecutors. The Antiochene  community was divided between the heretics and the supporters of the First Ecumenical Synod.  When the Emperor Constantius died he was succeeded by Julian the Apostate who persecuted the Christians and initiated efforts to  bring back the insanity of idolatry. Julian drove St. Meletios from his throne, and many Orthodox believing Christians fled his persecution while  some submitted to death and martyrdom.

After the death of the profane emperor Julian. the pious and God-fearing Jovian became emperor  (363-364). The divine Meletios then was able to return to his see in Antioch. The emperor held St. Meletios in very high regard.  Meletios convened a synod where the Arians hypocritically   pretended to complete agreement with Orthodox doctrine, proclaiming that the Father and the Son were co-essential.  Later a new emperor, under the influence of the Arians, exiled St. Meletios after Arianism had spread over greater territory. While in exile he met St. Basil the Great, who agreed with his wonderful exposition on the Holy Trinity. St. Basil championed Saint Meletios and eventually Meletios returned to his see. It was at this time that he encountered the young John Chrysostom. The pious western Roman Emperor Gratian, influenced by St. Ambrose of Milan, returned Meletios to his see in Antioch for the third time


Meletios, always a meek kind and gentle man, was seeking the unity of the Orthodox who truly believed the same, but were separated for other reasons. He urged those  who believed correctly but were divided, in part: “The Lord of the sheep has put the care of these sheep in my hands. You have received charge of the rest. Our little ones are in communion with each other in true faith.  Therefore, my dear friends, let us join our flocks. Let us do away with our dispute about the leading of them, and feeding the flock together, let us tend to them in common . . .”   Thus Meletios speaking these kindle and gentle words influenced many to join together in the Church embracing the true faith. As the Church increased in strength, the Arians were weakened in promoting their heresy and  their oppression of the Orthodox Christians.

The Emperor Gratian summoned a former general named Theodosios to become emperor of the East, where the heresy flourished. The newly appointed emperor Theodosios, had a God-inspired dream wherein he saw Archbishop Meletios crowned and in adorned in glorious apparel, and an intimate friend assured him that his dream was clear and not ambiguous. When Theodosios assumed the imperial throne, he gave his attention to the harmony of the eastern churches and summoned all the bishops to come quickly for a meeting in Constantinople. About one-hundred fifty arrived, and he forbade anyone from pointing out to him which one was Archbishop Meletios, because he wanted to recognize him from his dream. All the bishops entered the imperial palace. Theodosios, then recognized Meletios, and running up to him, he stood gazing at him with great joy. He then wrapped his arms about him and kissed his eyes lips, breast, head and the hand that had given him his crown, then he told the saint of his dream.

For forty years the Orthodox in the capital had been trampled upon by the malice of many heretics being supported by Arian rulers. Now the noble Theodosios, by the grace of God, restored all churches and properties to Orthodox hands. In 381 AD the Second Ecumenical Synod convened in Constantinople, first under St. Meletios. There, St. Gregory the Theologian, who knew and loved the Archbishop describes him as a “saintly man, simple, straight-forward, and redolent of God, serene, impressing everyone with his courage and modesty, a true product of the Spirit.”

This spiritual great saint loved and served the Church with his whole soul, using all his energy and power, truly a gracious and majestic man!  All that he maintained about the triune God, that is, his entire trinitarian formula was approved by the Ecumenical Synod. The Saint then gave  a miraculous sign to confirm everything.  The Arians present, in a profane manner, asked St. Meltios to give his opinion about the Trinity. He arose and showed them all his three fingers representing the Trinity. He withdrew two fingers, leaving one, then he blessed the people – and then, O the wonder– fire, like lightning flashed forth from his hands. The Saint then cried out: “We understand three hypostases, and we speak of a single essence.”  In this manner he put the heretics to shame and affirmed the glorious Orthodox Faith. It was shortly after this that the Saint fell ill and  reposed surrendering his soul to the Lord. This occurred in Constantinople but his relics were taken to Antioch.

In his funeral oration, St. Gregory of Nyssa, said in part: “The ark, my brethren, was that man of God, an ark containing in itself the divine and mystic things . . .  It was the rod of priesthood, which budded in the hands of our saint, and whatever else we have heard the ark contained was held in the soul of that man . . .  When the Church first beheld him, she saw grace poured around his lips, a consummate perfection of humility, a meekness like that of David, an understanding like unto that of Solomon, a goodness like that of Moses, a strictness as that of Samuel, a chastity like that of Joseph, the skill of Daniel, a zeal for the Faith such as was in the great Elias, a purity of body like that of lofty-minded John, an unsurpassable love as of Paul . . .”