THE DESCRIPTION AND APPEARANCE OF JESUS CHRIST

THE DESCRIPTION AND APPEARANCE OF JESUS CHRIST 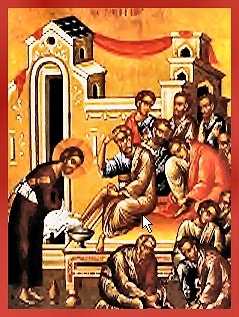 Concerning the God-man, the Son and Logos of God, the Evangelists and Apostles wrote about His works in the world in the Divine Gospels. They recorded the accounts of His transfiguration, His crucifixion, His resurrection and His ascension up to heaven.  But there were many other private individuals of that period, not followers of Christ, who wrote a more detailed account concerning the life of the Lord.  One who wrote about the character, appearances, form and figure of Christ which is worthy of mention, is the Roman Pouplious Lantoulos, who lived during the days of our Lord, residing in Jerusalem at that time. He wrote a letter to the Roman senate which is as follows:

In those days there appeared a young man, who is still living, a youth that has great power and whose name is Jesus Christ.  The populace calls Him a strong prophet and His disciples call Him, Son of God. He raised the dead to life; and cures the sick of every type of disease.  The youth is tall but well proportioned.  The countenance of His face is both serious and active, so that those who look at Him love Him, and yet in another way, they are afraid of Him.


The hair on His head is the color of wine down to the beginning of His ears, lacking brilliance.  It is smooth from the beginning of His ears to His shoulders, then twisted and brilliant from the shoulders down, where it hangs divided according to the custom of the Nazarenes.  His forehead is smooth and clean, His face without blemish decorated with a light pink color.

His appearance is polite and joyful, His nose and mouth are altogether blameless.  His beard is thick being of the same color as His hair, and is also divided in two, while His eyes are blue and filled with extreme brilliance.  When He scolds He is fearful; when He teaches and advises, He is attractive and beloved.

Wonder is the grace of His face and dignified.  Not once was He seen laughing, but He was often seen crying.  According to the height of His body, His hands being very straight and His arms graceful, and according to His generation, He is the nicest of all men.

Think of those most pure eyes of Jesus, so calm, so sweet; the straightness of His nose; the somewhat chestnut-colored and at the same time golden hair and beard of His; His great and joyous forehead; the blended color of His calm and royal face; His fine, long fingers and his perfectly shaped hands; His moderate stature, and simply all of the other symmetry and grace, which shone in all His members.  Jesus was so beautiful that, as Lentulus, that officer who had seen the Lord with his own eyes in Jerusalem, wrote to the senate in Rome, there has never appeared on earth another person more beautiful than Jesus.  Foreseeing this beauty, prophet David wrote: “You are the most beautiful  of the sons of men” (Ps 45:2). Aquila rendered this line, “You are adorned with beauty by the sons of men.” Symmachus rendered it,: “Among the sons of men You are good in beauty.” The bride in the Song speaks lovingly to Him: “Behold, You are beautiful, my beloved, truly lovely (Song 1:16) This is why the people could not be satisfied when looking upon Him, nor did they want to take their attention away from Him.

St. John Chrysostom explaining this passage “When Jesus saw great crowds around Him” (Matt. 8:18), wrote: “The people were really attracted to Him and they loved Him and marveled at Him, desiring always to be looking upon Him.  Who would want to leave while He was doing these marvelous deeds?  Who would not want to simply get a glance at the face and the mouth that as saying such wonderful things?  He was not so wonderful only when He was doing wonders, but even when He was just looked upon, simply He was just full of grace.”  This is what the prophet David meant when he said that He was the most beautiful among the sons of man.

Now if the physical body of sweetest Jesus was so beautiful then when He was bearing a corruptible body, how much more beautiful is it now that it has become incorruptible and glorified and His divine face is shining in heaven infinitely more brightly than the sun?   This is why St. John Chrysostom has sought with his eloquent homilies to move us to do everything we can so that we may achieve and enjoy the most sweet vision of the glorified and most beautiful and most desired divine face of Jesus.  For if one is to be deprived of the vision of that most beautiful and most desired face of Jesus, this is truly a worse calamity than a thousand hells.  For as St. John Chrysostom wrote:

“Even if we experience a thousand hells, none of these will be anything like the experience of seeing the calm face of Jesus and His serene eyes turn away from us as being unable to endure looking upon us.”