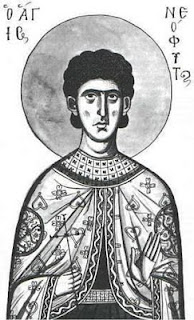 Being an ascetic and a martyr, our Saint is truly amazing, for from early childhood, he emulated his God-loving parents and virtues  beautifully bloomed in him, causing him to help everyone who needed it.  He offered a prayer at the entrance to a church, and struck a rock; Immediately a vast supply of much-needed water and milk came forth, which quenched the thirst of many, not only bodily thirst but also the thirst of their souls were nourished.

Neophytos, tried to hide the virtues with which he was adorned,  never becoming proud and always sought the ascetic life. His mother Florentia in a dream learned about her virtuous child, for she was in amazed  at his many wonderful miracles. Shedding tears


she asked the Lord about her son, for she did not understand  his amazing life. She  observed a dove with wings and a golden back, entering Neophytos’ room, flying around and alighting on his bed, which amazed her. She realized that this was no ordinary dove but some type of divine visitation.  She then spoke to the dove asking: Why have you come and perched on the bed of my son?  And the wonder! The dove replied: “The Holy Spirit sent me to remain hovering over the boy’s bed, to fight against any assault of the enemy, so as to keep him pure and without defilement.”

Florentina heard this divine voice and suddenly a great and brilliant light came down, like a bolt of lightning and she fell down and died. The sights and sounds seemed to be too great for her to bear. And she laid there without speaking or breathing. Neighbors discovered her lifeless body and began to make preparations to bury her. But Neophytos asked them to do nothing until his father comes home, and he requested that they do not bury  her.

When Neophytos saw his father coming, finding that he had already heard of his wife’s death, and was sorely sorrowful, the Saint asked him to stop sorrowing, that mother has finished her course. “Even though she seems to be dead to everyone here, I am able to raise her up.”  Going to the house, Nepophytos, this most  amazing child, took the hand of his mother, saying: “Arise mother, for the Lord has willed it, and you have slept enough. Then the  wonder!  Her soul,  upon hearing the words of Neophytos, went back into her body . She awoke like someone who had fallen asleep for a spell, and told of her vision to Theodore, her husband. As she spoke of the dove, it began flying around and they all beheld it. The dove then spoke to Neophytos, telling him he must depart, leave everything and his family and go after everlasting life. All those around heard this voice, and  believed the words which they heard.

Neophytos heeded the commands and went to Olympos and the dove accompanied, leading  him on the trip. The dove brought him to a cave in which there was a fierce lion. The Saint  spoke to the lion and ordered him to find another place for himself, “for this is a command from the Holy Spirit” The lion licked  his feet and kissed his chest and obediently departed.

Neophytos stayed at that place for a year and  was then given  a book  by an angel.  The saint opened the book and saw the command to return home to bury his father and mother, and then  “return to me your heavenly Father.”  The Saint returned home, never abandoning his very strict ascetic life. In time, he buried his parents, and distributed the estate among the poor. He then returned to the mountain to resume his former life.

At this time Diocletian and Maximian, were enthroned as rulers.  They were beastly, and even more beastly than the beasts.  Maximian  mercilessly tortured all Christians, sent children to be cut in pieces, drowned or burned, always planning and seeking  for even worse tortures for them.  An angel told Neophytos to prepare for soul-saving martyrdom. He prepared himself and entered the arena and shone as radiantly  as the sun, astonishing Maximian, thinking he was going to offer sacrifice to the idols. But when he heard Neophytos speaking against the idols, his astonishment quickly transformed into furious anger.

Neophytos was taken to torture where they left nothing undone, using every method possible to break his spirit and change him to a idol/demon worshiper like themselves.  They scraped him, they flayed his flesh, and thrashed him with 500 blows from rods. Neophytos kept right on preaching  to his torturers, urging repentance and turning to God. He spoke like this: “Men, brothers, do not neglect your salvation.”   They then applied vinegar and salt all over his much wounded body.  Nothing stopped the Saint from preaching.

Finally they prepared a terrifying furnace, fiercely hot, and threw the Saint in it, leaving him in for three days.  On the third day thinking that they would removes his ashes, they opened the doors, flames shot out burning all those around.  And  then the wonder! Neophytos emerged from the  furnace heathy and uninjured. Not a hair or garment was singed.  The tyrant Maximian was beside himself in fury , and started planning another form of death for the Saint. He brought forth wild beasts not fed for five days, but they licked the Saint’s feet, showing themselves to be his servants. A lion that came to him was the same one he had put out from the cave, and the   lion leaped about being happy to see the Saint.

In great shame and uninhibited fury, Maximian lunged a spear through the heart of Neophytos, completing his martyrdom.  Neophytos  went forth, this wonderful young man, filled with divine grace, carrying various crowns. May we who glorify his memory, through his intercessions, receive mercy from God all of our lives. Let us firmly preserve the Holy Orthodox Faith, wherein He sacrificed His life for our Master and Lord, Jesus Christ.