IF GOD IS NOT THE HOLY TRINITY, THERE IS NO GOD!

IF GOD IS NOT THE  HOLY TRINITY, THERE IS NO GOD! 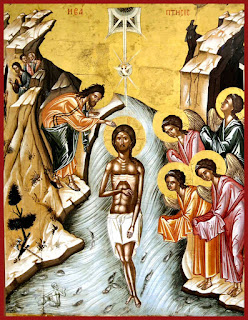 “God is the Lord and has revealed himself to us; blessed is He that comes in the name of the Lord.”

We sing this hymn frequently in Church, but how did God reveal himself to us? As the  One Triune God   of three hypostases. He is one nature, one essence, one will, not three gods. God necessarily is a Trinity because He as being the perfect Mind, He must have an idea of himself,  a perfect idea, for a perfect Mind can only beget a perfect Logos or Idea. God also necessarily has a perfect spirit. Both the Logos and Spirit have their eternal origin in the Father, and are coeternal having  the same nature.

The Father is perfect Mind, the Son is perfect Logos, and the Holy Spirit is perfect Spirit. If God were the Father Mind , lacking


a logos and spirit,  He could not possibly  be a mind, nor could he be God, for having no idea of himself he could not even know that He exists, and thus have no other knowledge.

When  He was  baptized by John the Forerunner in the Jordan River, the spirit came down , in the form of a dove on Christ, as He came up out of the water,  the voice of the Father spoke, calling Him His beloved Son.  The Trinity is now revealed and all mankind  rejoices, for we see the triune God  bearing witness to the Godman in the Jordan, our Lord Jesus Christ, sanctifying the waters.

Christ often spoke of our Father in heaven and of the Holy Spirit, but on this Feast Day we witness them together as one God, and this is a revelation. Hear O Israel, there is one God. Yes, God always remains one but is necessarily three, the one remains undivided and the three are inseparable.  The Holy Fathers have taught us that the Father is Nous or Mind, the Son is Logos born of that Mind,  and the understanding Spirit.

This is the hymn of that notable day.  “When you were baptized in the Jordan Lord, the adoration of the Trinity was manifest, the voice of the Father bore witness to you, and there He called you His own beloved Son.  And the Spirit appeared in the form of a dove, bearing witness to the certainty of the word. You have appeared, Christ our God, and illumined the world. Glory to you!”

We can gain additional knowledge by observing  man who is the image of God.  St. John the Evangelist says: “No man has seen the God at any time the only begotten Son, who is in the bosom of the Father, He has declared him” (John 1:18). Man has a mind, which no one can see , and which is the source of his ideas, the mind declares  itself through the voice, speech, writing, eyes  and body, which together  constitute his logos. His logos makes known to himself and others what is in his mind. However man would not even  be able to think if he did not have an understanding spirit, where all impressions or ideas  are imprinted.  Example: If someone says dog, I immediately understand because dog or dogs is imprinted in my spirit. Without these ideas imprinted in the spirit, I could not think.  If someone said to me tsxzch, I would have no idea because that is not imprinted in my spirit.
The accusation against us that we worship three gods is not justified, for we constantly pray in this manner,  to the triune God as one God:   Glory to the Father and the Son and the Holy Spirit, now and for ever and unto the ages of ages. Amen. When we say  “our Father”, “heavenly King”, or “Save us O Son of God”, we know for certain that this is one God, but we address each person or hypostasis.;