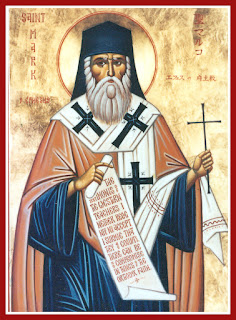 Mark Eugenikos was born around 1392, spending  the greater part of his life in Constantinople. He  had desired to live a monastic life, which he did for a time, but the Lord was  preparing him for a much greater task – the defense of all the truths of Orthodoxy against the false teaching and false authority of  the Papacy, at a time when  Orthodox leaders were fearful of attacks and capture of  their beloved city – Constantinople.   Well educated,  Mark was seriously studious and covered many subjects, especially theology and rhetoric. Although he was living in the world he was not bound by it, for his first  desire had always been for the ascetic life of silence and contemplation. Then as the years went by, his soul became increasingly simple and pure, and he was beloved and honored.  The Lord endowed him firm faith and great stamina arming him with the ability to defend the dogmas of Orthodoxy. This defense was supported by his fellows,  first with little,  and later no support, and even worse came the opposition of his fellows. Mark was ordained a Priest and later elevated to Metropolitan.  Through the providence of God,  Mark would be chosen to champion the truth and uphold the dogmas in discussions with the Pope and the possibility of union of the churches.

Prior to the fall of the Byzantine Empire and the subsequent captivity under  the Turks, the Emperor and Patriarch hoping   that they could prevent the fall of the Empire, especially saving the city of Constantinople, by obtaining  military help from the west, in


exchange for some type of union. Sadly, with most of the Orthodoxy priority was given to saving the city and surrendering the Faith.  The Papacy authoritatively insisted that  the Orthodox  to go first to Ferrara where they had meetings, but later  when the plague struck that city, the  gatherings were moved to Florence. The first Orthodox discussions with the Latins began with some enthusiasm.  Gradually this weakened and finally disappeared,  the only exception being  St. Mark who stood like a giant rock of Orthodoxy in a stormy sea, and in his strong defense withstood the waves of papal attacks against the truths of the Church preserved intact in her from ancient times

Mark told the Latins that their many discussions regarding unity would accomplish nothing,  unless Rome renounced her many errors and innovations. Many Orthodox did not like Mark’s words considering them as too sharp, because their hopes were  more in saving the city than in  defending the  Orthodox Faith. This union would not be on dogma and doctrine and truth, but   would come about by submission of the true Church of Christ to the Pope of Rome.  But the Pope and cardinals were not even slightly interested in the discussions, for they only desired to place the Orthodox Church under subjection to the authority of the Pope of Rome. Until this day, this remains the official dogma of the Papacy, that everyone must recognize the Pope as supreme head of the church, subject to no one, to be judged by no one,  and as being the only absolute infallible  authority of the church,  these things define the Papacy.  All bishops must submit to him and no one could find fault or accuse him, for they proclaim him as being the head and guide of the church.

The Pope attempted to convince the Orthodox to accept all their errors, and none of  the discussions were the least bit  genuine on their part.  Mark wanted the pertinent Canons of the former Seven Ecumenical Synods  read aloud so as to shed light on their discussions,  but the Pope rejected this outright. Mark brought up former holy Popes who  supported the Orthodox, but this was also disregarded by the Pope.

At one certain point,  St. Mark quietly addressed the Pope and his delegates: “ O Latins, how many years shall you be in the grip of the demons and teach evil? How long will you speak of the Seven Ecumenical Synods, yet deny their decrees as set forth by both holy popes and the holy fathers?”

Sadly at that time,  almost all of  the Orthodox had capitulated and signed a hateful document against Orthodoxy, but St. Mark sparkling like an enormous diamond, reflected the truths of God, which were previously established in the Church by the Seven Ecumenical Synods and the Holy Fathers.  He stood alone as a giant, staunchly defending Orthodoxy against the Papacy.  An  aroma of sweet incense surrounds his memory, continually rising before the throne of God, who hearkens to the intercessions of Mark the Ephesian,  for all those who  fervently honor and praise the memory of God’s faithful servant.