Feb 8 also Sat. of the first week of the Great Fast 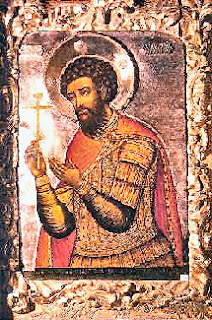 St. Theodore Stratilates (the Commander) lived around 320 AD, when Licinius was ruler of the Roman Empire.  The Saint was born in the village of  Euchaita in Galatia. Later he lived in Heracleia of Pontus on the Black Sea. He had  much wisdom and was a well developed strong young man. Because of his eloquence and wisdom, his friends nicknamed him the  “spring of rhetoric.” Everyone wanted to be his friend and spend time conversing with him due to his kind character

When the emperor Licinius heard of Theodore, he had a desire to speak with him, which he did. This resulted in his giving Theodore the position of Commander in the Roman army, and governing the city of Heracleia. As soon as he received his post, Theodore declared to everyone that he was a Christian. Ruling over Heracleia,  he taught the populace that Christ was the only true God,  and Creator of heaven and earth. By his teaching and example  many of the pagans believed and were baptized.  Nearly all the pagans of the city eventually came to believe in Christ through Theodore’s  teaching.

When the emperor Licinius  heard that Theodore  was a Christian, he grieved privately, but wrote Theodore a very cheerful letter.  It contained a request that he join the Emperor in sacrificing to the


gods,  giving  them the honor they deserve. He wanted the Saint to go to Nikomedia to offer sacrifice. Theodore explained that it was impossible for him to leave at the present time. He urged the emperor to bring their gods to Heracleia, that we might offer sacrifice to them, openly and boldly, in a sacrifice that others see.  The emperor rejoiced entertaining  the idea that Theodore would accept the gods and abandon Christ. The emperor agreed and came with an 8,000 man army, bringing their greatest deities to Heracleia, nor did he have any idea as to what Theodore had planned.

That night as Theodore prayed powerful flame descended from heaven and a voice, saying: “Have courage Theodore for I am with you.”  Theodore, with tears flowing, realized that he was near martyrdom, and he prayed to  Christ mentioning  how we have  learned from Him, how to defy death out of love for Him, and he begged Him to increase his courage, that he might suffer in martyrdom for His name’s sake.  He then dressed in his best attire proper for a general to meet his emperor, and he mounted his horse, and went forth to meet the emperor with his army.

When the emperor arrived, Theodore greeted him joyfully and the emperor returned the greeting. Praising Theodore for his reverence to the gods. Then he asked him to sacrifice now before all the people.   He became enthusiastic and readily agreed when Theodore  told him of his personal desire to publicly venerate them.  Theodore then  asked the emperor  for and received  two of the  gold and silver gods of the Greeks from Licinius so as  “to worship them in my home”.  He took them home and smashed them into small pieces dividing pieces among the poor.

A centurion named Maxentius,  came and told the emperor, telling him what Theodore had done with the gods for he met a peasant who had the golden head of the goddess Artemis. Asking where she got it, she told him that Theodore the Commander had given it to her. The emperor being  filled with wrath,  had the saints hands and feet bound to two cross spikes so that it stretched out his body. Then he was given the lash forty times on his back and fifty times on his stomach.  Following this they took torches and mercilessly burned the saint’s body.  He was then chained and thrown into prison for seven days without food or drink. Theodore continuously sang praises to God in the prison often repeating: Glory to you my God!

The emperor again approached Theodore with flatteries urging him to honor the gods, also he could not understand  how he was able to endure such torments. But Theodore told the emperor  that no torture could separate him from love of the Lord Jesus  Christ.  After unsuccessfully trying to change his mind, the emperor gave the order for him to be crucified. His hands and feet were nailed to the cross, and while on the Cross the pagans and their children were  constantly were  mutilating his whole body, in every conceivable way. They shot arrows into his eyes, his face his privates, his whole body. The saint endured everything patiently and with great courage. His suffering was beyond description as he prayed asking the Lord asking why He was forsaking him, saying that he could not go on any longer. He was on the cross all night, and Licinius was certain  that he had died.

But an angel of the Lord came down, freed him from the cross and healed all his wounds. The angel said:  Rejoice, soldier of Christ!  Take courage!  God is with you and will empower you. Do not say that He has forsaken you;  complete your martyrdom for a crown awaits you. The angel then vanished and Theodore seeing  himself unbound and healed began to enthusiastically chant hymns of praise to God: “My God and my King, I will exalt you and bless your name for ever, and for ever and ever.”

At daybreak Licinius sent two of his guards to cast the body of Theodore into the sea. Upon arriving at the scene, the guards  not seeing Theodore,  began to realize  that Christ was certainly  the true God had and truly risen from the dead,  for we see that He has also resurrected Theodore, and that is the reason we can’t  find him! They cried out saying: Great is the God of the Christians! When Licinius found out what had happened, he sent three-hundred soldiers to execute the saint, but when they saw Theodore, they all accepted Christ , and being gathered with the citizens of Heracleia and not a single idolater remained among them.  Truly the blood of martyrs is the life of  the Church,  teaching us  that God is always active in the affairs of men.

It was time for Theodore to go to His beloved Master and God, and many of the faithful wanted to  prevent his martyrdom. But Theodore calmed the people telling them that it was time for him to go to Christ,  giving them instructions on how to bury his body in Euchaita.  Concerning the  wicked Licinius,  after King Constantine the Great declared the Edict of Milan,  he declared war against Licinius, who had increased the persecution of  Christians. He was killed in battle and Constantine became sole ruler of the Roman Empire, bringing peace to the Christian people. This empire founded by St. Constantine the Great remains the longest lasting empire in the history of the world lasting over a thousand years. For certain it will rise again according to many prophecies, and in the Lord’s time.
Posted by Unknown at 5:44 PM