God created Adam the first man; God assigned Adam the task of naming all the animals, and as they went before him he noticed them passing two by two, male and female. God said: "It is not good for man to be alone." He caused an ecstatic sleep to fall on Adam and from one of his ribs He formed a female, whom Adam named woman for she came from man. When Adam beheld her he was delighted for God provided him with a most beautiful companion and helper; and a woman would one day play a major part in God’s eternal plan.

Many things that pertain to man also pertain to woman. She is wonderfully made yet quite different than man . A wonder are her arms and legs as well as her ears and eyes, her hair and her voice, and general appearance. Women are similar to men but quite different. Her circulatory system, her muscular system, her breathing system, her skeletal system and her nervous system are a great wonder, like man’s, as is her heart which is a dual pump, pumping newly oxygenated blood into the heart and blood out of the heart to the lungs. But her spiritual heart is filled with softness and love toward her husband and children. Lord how wonderfully am I made."
Women have functions unavailable to man, for she receives seed from her husband then her body energetically goes to work to handle a newly forming life which becomes a continuous miracle – a new-born baby! God gave this wonderful gift to the woman who knowingly or unknowingly cooperates with God in producing the new child which shares her life. The woman affectionately feeds, bathes and talks to this small helpless infant who feels secure with her. How wonderful did God make woman, for her body, immediately after conception, goes to work as she carries the child for a nine month period. From her own body milk is produced that is invaluable, being perfectly suited for her new baby’s nourishment. When God makes mother’s milk, He makes it unlike any other milk, for included in it, are components taken from the mother’s body that give the very best to the newborn baby and affect the mother as well!

Mother’s milk, formulated by God, cannot be duplicated by commercial formula which only mimics parts of it. Mother’s milk gives the baby resistance to disease; the child is less likely to suffer from MS, juvenile diabetes or heart disease or cancer before 15 years of age. The Mother who nurses is less likely to develop osteoporosis later in life; the nursing mother loses the weight she gained more quickly, and is blessed with a much lesser chance of uterine, breast or cervix cancer. Breast feeding is much cheaper, and avoids many later medical bills for mother and child. Breast feeding strengthens the immune system, reduces respiratory illnesses, lessens ear infections, fewer dental cavities all through their lives, and results in less obesity. "O Lord how wonderfully am I made."

There are some difficulties for women are during pregnancy, and there are many discomforts as the months go by. By the time delivery is approaching, some woman, are really looking forward to be free of the burden they are carrying. The Greeks have a nice greeting for such women which is "kali eleftheria", which means: a good freedom!

Bringing children into the world while living in honorable and God-blessed marriage, wherein father and mother love each other, results in the woman becoming a partner with God himself, who assigned her the important task of child-bearing. A woman who prays herself, and for her husband and for the child who came from her womb is truly blessed, and will be rewarded by the Lord in many ways. Why? Man is not like animals lacking the spirit and grace from God, and every single baby is precious to God, from the moment of conception. That is why abortion is ranked as murder, for it not only affects the child but causes great trauma to the mother-not-to-be.

Man is the image of God with the potential to become His likeness. The mother is the very first teacher of the child and from infancy she can teach the baby how the Creator formed it in her womb, gave her the ability to feed it from her own body, which causes a bond that continually grows stronger, a bond that lasts until death 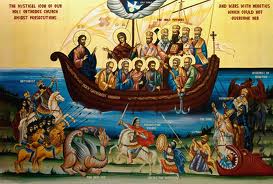 Shortly after childbirth takes place, the mother has goes to the church for the purification blessing, the child is brought to be churched and then baptized and born from above, and is now ready to be nourished from the cup of immortality by receiving Holy Communion. Gradually, the mother’s general work and responsibilities increase and it is up to her to teach the new child about God and His Son Jesus Christ, about His beauty, kindness and great mercy, which caused Him to ascend the Cross. Also about His wisdom in establishing His holy Orthodox Church for us, wherein we find refuge from the world, and a taste of the kingdom of heaven. Then by keeping His commandments, and partaking of His Body and Blood, the child advances little by little and as his faith increases, filling him with hope and love. These things are what a good mother instills in the heart of her child, for no greater gift can she give her child that teaching him truth and love and guiding him to salvation and eternal life.

Blessed is the Mother who fills her child with such beauty, preparing him or her to function in this world of ugly deception. She will receive a crown, especially if she continues this process with every child she bears. The reward of a pious mother who loves Christ, is faithful to her husband, and to the Orthodox Church, will be sweet when Christ comes in His kingdom. What a wise decision it was for God to give man a women as a companion to comfort him and bear his children. Children from such a faithful mother are blessed as well, for they will grow up in faith and the love of Christ delighting in the knowledge of why the world exists and man’s purpose. Such children will grow up to adulthood, giving thanks to God for everything and saying to Him: How beautiful is the world you gave us, Lord! "O Lord how wonderfully am I made."