THE RAISING OF LAZARUS – ITS CONSEQUENCES

THE RAISING OF LAZARUS –
ITS CONSEQUENCES 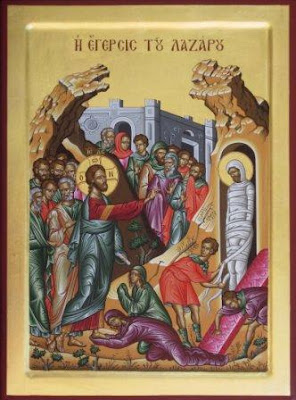 "Then Jesus six days before the Passover came to Bethany, where Lazarus was who had been dead, whom He raised from the dead"
The event of the rising of Lazarus is an extremely important event, for Christ, simply called out to the four-day dead Lazarus: "Lazarus, come forth!" Lazarus had already undergone the process of corruption, causing his sister Mary to say to Christ: " Lord, He stinks." Lazarus also was prepared for burial in tight graveclothes, according to the custom of the Jews. Neither the odor nor the graveclothes were a hindrance to the voice of Jesus Christ, and for an important reason. He who in the beginning simply declared: "Let there be light, and there was light," now says: "Lazarus, come forth!"


And Lazarus comes forth. This establishes beyond any doubt, that He whose power is such that He only speaks and it is so, is certainly the God and Creator of all the ages. The Lord’s power is equal to His will, therefore, He only wills and it is already accomplished. Being all knowing He governs the entire creation and nothing is outside of His providence.
The consequence of His raising Lazarus was of massive importance to the believing Jews, and an unsettling event to the hypocrites and inimical Jews who thirsted for His death. Many Jews knew Lazarus and loved him, and they shared the sadness of his death with his sisters, Mary and Martha. They were ecstatic and rejoiced greatly as in amazement they watched Lazarus come back from four days in the tomb to life among his family and friends. Christ, who is the life and Resurrection filled their hearts with fear and gladness, for this has never happened, until God came among mortal men. This event caused an uproar in all Jerusalem. They cried out, this must be the Christ! When Christ comes can He do anything more? If this is Christ, then God is with us!
The following day, which we commemorate as Sunday of the Palms, crowds gather as Jesus on the foal rides into Jerusalem. The raising of four-day dead Lazarus caused a festive atmosphere in Jerusalem, and spawned a great celebration to take place. Jews and their children cast garments and palms in His path welcoming Him, desiring to crown Him as their king, and crying out: "Blessed is He that comes in the name of the Lord; Hosanna in the highest" ! Jesus Christ is truly the King and heir of David in the flesh and will certainly be coronated, not with a purple robe and crown of gold, but with the robe of mockery and crown of thorns!
Returning to the tomb of Lazarus, we again hear our Lord Jesus crying out in a loud voice, not to Lazarus alone, but to the race of man: Come forth out from darkness for I am the Light of the world! Come forth out from your lethargy and behold, I am your life and your resurrection, Return to me and I will not cast you out. Come forth out of the faithless world and enter again into Paradise.
Come forth out from your sins and abandon our iniquities, I will wash away your sins, and you shall be whiter than snow, and I will forgive all your iniquities. Jesus is hungry for our salvation and thirsty for our redemption. By nature He is the Creator and God of all, but willingly lowered himself to become one of us. Faith and acceptance of these Orthodox truths is the door to everlasting life, the one thing necessary in human life. The shortness of this temporary life was experienced by Lazarus, for though Christ raised him from the dead after four days, yet he died again as all men do until the general resurrection. Who will acquire eternal life? Those who acquire it and remain faithful while in this world which is filled with unbelief and iniquity. As only those were saved from the great Flood were in the ark, so in this life, the saved need to be aboard the Ark of the Church. At this time, let us go in spirit with Christ to Bethany and after greeting Mary and Martha, cry out with Christ: "Lazarus, come forth!" 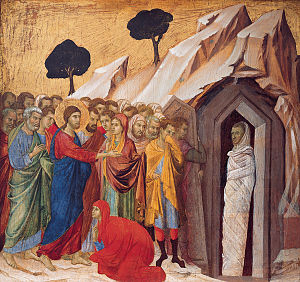