IT IS NOT MOTHER NATURE, BUT THE LORD, CREATOR OF HEAVEN AND EARTH

IT IS NOT MOTHER NATURE


BUT THE LORD, CREATOR OF HEAVEN AND EARTH 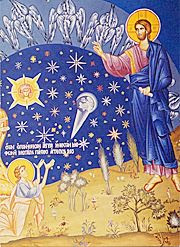 Not believing in the true God and Creator of all that exists, does not make one an atheist, but such disbelief robs a person of their true humanity, rendering them to become similar to animals and beasts who live for the flesh alone. Without faith and leadership of Jesus Christ and His Orthodox Church, there is no divine-human example to follow and no one with whom to rejoice. Without faith in the true God, there is no hope, without faith and hope, there is no true love. The lack of faith robs man of humility and meekness, and renders him proud and wretched. Without genuine faith, there is no hope of life after death or of union with God. Through the Church we obtain knowledge of the two worlds, physical and spiritual. Events of the physical world are not without understanding to Orthodox Christians.
What is true about natural disasters? We hear about Mother Nature, and after the recent tornado in Oklahoma, (2013) one writer, addressed a "merciless mother nature", which is how many see things when disaster strikes nearby. For no one welcomes a disaster nor do they wish it on someone else. Our main hope is to avoid disasters; and if they do come, know how to deal with them 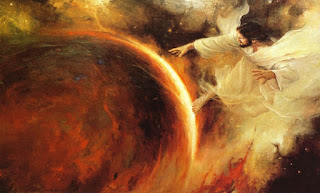 In the Orthodox Church, we understand that weather conditions are not blind forces that come and go without purpose, for the providence of God directs natural events. Knowing this, we repeatedly pray asking the Lord to grant us peace, good weather, and abundant crops. We do not blame disasters on a fictional mother nature, but, knowing who controls everything, we offer prayers to a kind, compassionate and most merciful God.
All weather is under God’s control, "who causes His sun to shine on the just and the unjust." It is impossible for mindless matter to be self-willed, nor is it uncontrolled but completely under God’s control. St. Barbara abandoned the unclean gods of her father, and loved Jesus Christ, keeping all His commandments. Her wicked father slaughtered his own daughter because she abandoned the forbidden idols. After he killed her, coming down from the mountain, the Lord sent a single bolt of lightning which killed him, separated from this world and uniting him to Hades, the hate-filled prison of the wicked\, unable to partake of the love and mercy of God.
In ancient times there were civilizations which attributed natural disasters to imaginary gods who may have become displeased or angry, and believing in good gods and bad gods. Men sought to appease these gods, and formed idols of wood or stone worshiping them, they offered human sacrifices also. This ancient world of idolatry was in reality the worship of demons, and such worship made men more wicked, because falsehood darkens the hearts of men. This darkened world was dismantled by Jesus Christ, who said: "I am the Light of the world; whoever follows me shall not walk in darkness but shall have the light of life." Without Jesus, man walks in moral darkness and stumbles, sadly being dead before he dies, for Jesus is the "resurrection and the life." 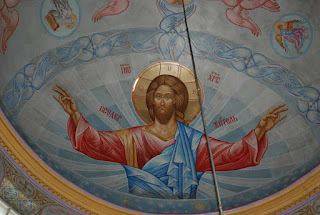 In order to enlighten the human race, this brilliant light shines in the world, continually demonstrating the correct worship of the true God. The Lord formed His Church establishing himself as the Head of the Church and has always remained at its helm, according to His promise: "Behold, I am with you until the close of the age." Beginning with but a few Apostles, who were former fishermen, the Gospel was preached everywhere, attracting great persecution and the martyrdom to the many preachers of truth. Wonderfully, the greater the persecution, and the more violent the torment and death of witnesses to the truth, the more the Church increased, always being victorious! The rivers of martyrs’ blood drowned the old world of idol worship and false deities, and they set free those who were imprisoned by their sins and passions.
"Who looks on the earth and makes it tremble; who touches the mountains and they smoke"             (Psalm 103:32).
Forewarned by God of the coming disaster of the Great Flood, Noah and his family alone were saved. He was a just man who always listened to the instructions of God and kept His commandments. Guided by God he constructed and populated the ark in which they were all saved.
Many supernatural disasters were brought from God through which Moses afflicted the tyrant Pharaoh, but left God’s people unharmed. Finally the angel of death came over the land of Egypt. The Hebrews who had the blood of a lamb scribed on their door posts, suffered no loss, for the angel of death passed over them but struck the Egyptians whose firstborn were destroyed. Pharaoh lost his firstborn son and heir, as the punishment of God descended on Egypt’s rulers.
God, who alone is all powerful and all-knowing lives for ever. He did not create the world and man and then just stand back. Rather, He is ever active in its events, always guiding it toward its ultimate purpose. Whoever fails to realize that our Father in heaven is in control of everything falls into confusion and error. The Lord benevolently provides the entire world with food and drink, with crops and animals, and in His great love for man, He always seeks to preserve not destroy man. But when men deliberately revolt against God and ignore His commandments, then disaster will certainly come sooner or later. This is not from God’s wrath but from His goodness, which seeks the repentance and salvation of every man, yet sadly not every man desires all the good that God wills to give to him. The Lord endows us with freedom to do good or evil, to believe truth or falsehood, and to sin or repent of our sins as we choose. He seeks to persuade us through teaching and preaching, by conscience as well as by natural threats and disasters.
Holy Scripture proclaims: "He looks at the earth and it trembles; He touches the mountains and they smoke." Our Lord, told His frightened disciples during a severe storm, not to be afraid, and then told the sea to be calm and the winds to be quiet, and immediately it was so. His disciples were astonished and said: "What type of man is this that even the sea and winds obey Him."
The sea is always filled with dangers, and the faithful Christians called on their patron St. Nicholas, who , hearing their request, through the grace given him by God, calms the sea and violent winds.
Joshua, on the day when the Lord delivered Israel from the Amorites, inspired by God cried out: "Let the sun stand over against Gabaon, and the moon over against Aelon. And the sun and the moon stood still, until God executed vengeance on their enemies; and the sun stood in the midst of the heavens’ it did not proceed to set till the end of the day. And there was not such a day either before or after, so that God should hearken unto man, because the Lord fought on the side of Israel"      Jos. 10:12-14).
During the fifth century, violent earthquakes, continued for more than four months in Constantinople during the patriarchate of St. John Chrysostom. Processions of frightened people, walking barefoot in procession, were continuously winding through the streets praying repeatedly: Lord have mercy! A young boy was suddenly taken up to heaven before their eyes, and later returned urging them to sing what he heard there: "Holy God, Holy Mighty, Holy Immortal, have mercy upon us." And the wonder! Immediately, the earthquakes ceased and grateful people gave thanks and returned to their homes. This is how the Trisagion hymn was introduced into the Church.
In Orthodoxy, we are taught to pray, giving thanks to God for everything bad or good, for everything is for our benefit. We pray that this whole world will be enlightened by the Light of the world, Jesus Christ, and be resurrected to life by the Life of this world. For this present world is temporary and not the limit of our existence but is a training ground to prepare us for the sweet and beautiful world of the Kingdom of Christ. Contemplation of these thoughts fill us with great hope and joy, for Christ is the author and the object of our lives, to whom belongs all glory and honor, with the Father and the Holy Spirit, now and for ever and unto the ages of ages. Amen.
Posted by Unknown at 6:36 PM