THE IMPOSSIBILITY OF A POST-CHRISTIAN ERA

THE IMPOSSIBILITY OF A POST-CHRISTIAN ERA 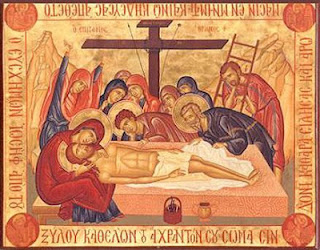 THE WICKED CRUCIFIED CHRIST, BUT HE IS ALIVE!

PROOF POSITIVE OF THE RESURRECTION OF CHRIST


Behold, through the Cross joy has come into all the world!
Ever blessing the Lord let us praise His Resurrection.
By enduring the Cross for us, He has destroyed death by death!


Christ is risen from the dead; trampling down death by death, and upon those in the tombs bestowing life!


Through faith in Jesus Christ who was crucified and arose on the third day, millions of martyrs have joyfully confessed the resurrected Christ even to death. All of Christ’s followers are christs, for the word "christ" means anointed. Every Orthodox believer puts on Christ in Baptism, and is sealed by anointment with Holy Spirit, therefore becoming a christ, in the image of Christ. The words of Christ are filled with life, beauty and truth, for He is the Godman and has conquered death and its ruler the Devil.


Christ promised that followers would do even greater works than He did. He also assured us that with faith as small as a grain of mustard, mountains would be moved.
Herein we will demonstrate the following indisputable truths. Few are those who dispute that Jesus Christ, eternal Logos and Son of God and of Mary the Theotokos in the flesh, was arrested as a criminal, punished as a criminal, deemed unworthy of remaining alive on the earth, and was thus sentenced to hanging on a cross. Christ willingly accepted this, being part of His divine plan to save the race of man. We confess: "He was crucified for us under Pontius Pilate, and suffered and was buried . . . " If this was the end of the life of Christ, if He did not rise from the dead,  He would soon be forgotten, and His memory would quickly fade away. But let us behold how the slaughter of millions of martyrs, for almost two-thousand years, produces millions of christs, for every one of them bears Christ within His soul and body as temples of the Living God.


Gloriously He arose from death and showed himself to many hundreds of people. His disciples He made into apostles, and sent them out to preach to the world: "All authority has been given to me in heaven and on earth. Therefore, go and teach all nations, baptizing them in the name of the Father, and of the Son, and of the Holy Spirit; teaching them to do whatever I have commanded you, and behold, I am with you always, even to the end of the age" (Mat. 16: 18-20). "He that believes on me and is baptized shall be saved, but he that does not believe will be condemned" (Mark 16:16).
EVERY TRUE FOLLOWER OF CHRIST IS A CHRIST


Because every true follower of Christ is also a christ, Christ is preached and taught through them. In the beginning, after Christ ascended, there were the twelve and the seventy christs who preached everywhere, baptizing and anointing making even more christs. Peter the christ, preached a single message to the Jews, and behold 3,000 more christs. The Jews began persecuting the Christians, followed by the Roman government, and for every one they killed, hundreds more christs entered the Church. "Christ, being raised from the dead will never die again; death no longer has dominion over Him."


Why do Saints suffer willingly, undergo unlimited torture,  having their eyes gouged out, skinned alive, burnt in fiery furnaces, placed on racks to tear them apart and so much more?  The answer is love! Firey love!  Flaming love! Love much stronger than any torture, love that outweighs every pain, love that is so totally faithful and absolute that causes a soul to yearn for torture and death, to be embraced by the divine arms of Christ.* The Martyrs follow in the footsteps of Christ, who suffered beyond human capability, taking on himself all the sins of mankind. hose who realize Christ's supreme love for them, are smitten, and seek ways to return that love to our Lord  That is why St. Paul  highly exalts love. "Faith, hope and love; but the greatest of these is love!

﻿
*St. Justin Popovich told the communists "Use your science and clone a thousand of me, and we will all die for Christ!"


THE MARTYRDOM OF ST. IRENE THE GREAT MARTYR
St. Irene proved to be indestructible and conquered every ruler by her faith and endurance. Her name was originally Penelope but an angel changed her name to Irene when she was baptized and became a christ. Noble, victorious, humble, indestructible, holy and magnificent, there are not enough words to describe this christ and her great soul-saving work.


* Her father Licinius had her cast into a group of prancing horses to be crushed to death. Not only did the horses not harm her, but one of them trampled on and killed Licinius.


* She was thrown into a pit and left for 14 days among venomous snakes and reptiles, suffering no harm


* The ruler ordered her feet to be cut off with a saw, an angel restored her feet and she stood before them.


* An attacking army was approaching and by her prayer she blinded them all; but afterward she restored their sight.


* They pierced her heels with spikes, then prepared three red hot metal oxen, placing her in one after another; not a hair of her head was singed.


* The Persian king Shapur had her beheaded and interred, but she arose and was caught up in a cloud and taken to Ephesus.


VICIOUS RULER AFTER RULER COULD NOT 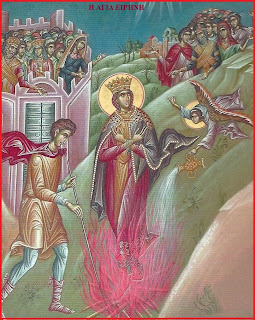 * In Ephesus she was honored as an apostle. Having completed her tasks she entered a cave which she had sealed with a big stone. After two days, the stone was moved away and her body was not to be found.


O Believers! St. Irene and millions of other martyrs, keep memory and actions of Christ alive by their deeds among men and thus produce countless christs, proving that there can never be a post Christian era. St. Irene, that wonderful and holy woman, through her martyrdom, brought over 100,000 more christs into the Church and the world. In our times, innumerable martyrs in Orthodox countries, caused christs to enter the world in hundreds of thousands. Almost a million Serbs were martyred by Roman Catholic Ustashi and Nazis. Four and a half centuries of Turkish occupation of Orthodox countries engendered innumerable christs. Under Communism, this was repeated. That is why there can be no such thing as a post-Christian era.


Unbelievers will see Him when He comes as Judge, and in fear and trembling will seek death and not find it. For then they will realize that Christ is almighty God, but it will be too late for their repentance and acceptance of the Messiah, instead they will condemn themselves. 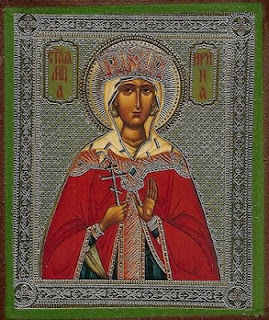