St. Paul speaks of the Priesthood of Jesus Christ in his Epistle to the Hebrews.


"And every Priest stands in daily ministrations often with the same sacrifices – but this man (Jesus) after he had offered one sacrifice for ever, sat at the right hand of God; from henceforth until his enemies become the footstool of his feet. For by one offering He has perfected forever them that are sanctified." (Heb. 10:11-14).


The mistranslation of the text above supports the General Protestant view in opposition to that of the Papacy. Could this have been their intent? The reason for saying this is that elsewhere they translate correctly the word from original Greek into "forever." The Protestant view is that Christ’s sacrifice was a single occurrence and therefore the Mass of the Papacy was incorrect declaring each Mass as a sacrifice. The Protestants generally do not solemnly celebrate this most important part of church services, nor do they think that Eucharist is anything other than bread and wine, thus they are in opposition to the correct and Orthodox truth. 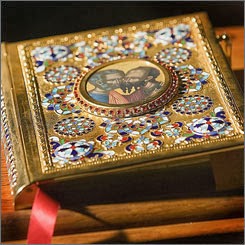 Here is the correct translation as in the original Greek:


"And every Priest has daily stood ministering often with the same sacrifices – but this man (Jesus), after he had offered one perpetual sacrifice, sat at the right hand of God; from henceforth expecting, until his enemies become the footstool of his feet. For by one offering He has perfected perpetually them that are sanctified." (Heb. 10:11-14). The word mistranslated as forever and correctly translated as perpetual is di-inekes. Interestingly in the Orthodox Study Bible, this same word is translated correctly in Hebrew 7:3 as continually, where he speaks of the priesthood of Melchisedec, but in the same book of Hebrews, speaking of Christ’s priesthood, both verse 10:12 and 14 are mistranslated as forever!


The difference between forever and perpetual is not trivial. Forever is the mistranslation and perpetual is the correct translation. The Protestants interpreting forever, do not believe in the mystery of the Eucharist (Holy Communion), as being truly the Body and Blood of Christ, but only bread and wine. They teach that Christ performed one sacrifice and, that’s it, forever. Perpetual being the correct translation, means continuous without interruption. The Church, from the beginning celebrates the continuous sacrifice of Christ, as "the bloodless sacrifice", which is celebrated in Orthodox Churches throughout the world.


In the One Holy Catholic and Apostolic Church of Orthodox, this correct translation verifies that Christ’s death on the Cross is continuous. When we celebrate the Eucharist in our Liturgy, we celebrate the continuous sacrifice of our Lord. When St. John Chrysostom prepared for the Divine Liturgy, during the preparation service when he spoke the words: "And one of the soldiers pierced his side with a spear, and immediately there came out blood and water. . ." Upon saying this, he thrusting the lance into the lamb or square of the bread, would burst into tears, realizing the spiritual reality of the continuous sacrifice of Christ.


In conclusion, it would be good to go to Divine Liturgy, not as just "going to church", but witnessing in awe, the great sacrifice of our Lord on the Cross, through which He granted us His Flesh to Eat and His Blood to drink; then on every Sunday we also celebrate His glorious Resurrection! For this reason, we sing: "Behold, through the Cross joy has come into all the world!"
Posted by Unknown at 9:24 AM