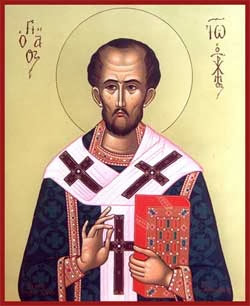 Saints, Martyrs, the Devout, the Just or Righteous, and Wonder-workers, are some of the names we use to honor those among the Saints. They have struggled with great faith and love to serve God first and above every other effort. Some struggled in the desert, with fasting and asceticism, others lived in monasteries and caves, and many lived in the inhabited world, all having one desire, to faithfully serve and love the living God and Creator of all, and to leave this world having full confidence and hope of a good apology at the dread judgment seat of Christ and of everlasting life in the world to come.


Standing out among the great Saints important to Orthodoxy is St. John Chrysostom. Archbishop of Constantinople (Nov. 13). St John was born around the middle of the fourth century and had lived in Antioch in Syria. Here is a brief account showing that the Saint did not interpret the Scriptures out of his own ideas, but received help directly from the author, in this case, the Apostle Paul.

John was called Chrysostom, which means golden-mouthed, and he was a superb orator, filled with the power of the Holy Spirit. Golden-mouthed includes not only his manner of speaking, but also what he said, for he was highly endowed with fiery and divine Apostolic zeal. He was a great beacon of the Church and teacher to the inhabited world.

Christ was his whole life, and serving Him was his most ardent desire, for He was the object of the Saints’s total love. St. John was divinely informed and his excellent interpretations of St. Paul’s fourteen epistles, which compose a large part of the New Testament, are still available. He was particularly devoted to St. Paul, and frequently spoke the words of the Apostle to others as though Paul was living within him.
THE ANXIOUS PALACE OFFICIAL


At one time the emperor was angry with a certain palace court official, who having no other place to go, went to visit St. John Chrysostom, who was well known for helping the unfortunate, but when he arrived the bishop was not available, and he was given an appointment to return at the hour of Apodeipno or Compline.

St. John informed his disciple Proklus, who eventually became a bishop, to bring the visitor to him in his cell when he arrives. Night came and at the hour of Compline, the troubled official arrived on time. He informed Proklus that he had an appointment with Chrysostom. Proklus, verified this, and he went to the Saint’s cell to inform him, but he found the door closed, and thought that someone else was inside. Through a small opening, he observed that while St. John was writing, someone was standing behind him whispering into his ear. Each time Proklus checked, this scene repeated itself throughout the night, for he saw the anxiety of the guest. Proklus told the nobleman to return the next night. He wondered how that man speaking to St. John, had entered unannounced and without an appointment, and more puzzling without his knowledge, for he was at the door to the Saint’s quarters.


The following day the official returned again at Compline and the same things were repeated. St. John was writing and someone was whispering in his ear. On the third night, the official returned, his anxiety being exceedingly great, and Proklus told him not to be grieved. For tonight he is alone for I have kept a close watch and I am sure that no one has entered to be with him. Proklus then went to the Saint’s cell again, and, O the wonder, he beheld the same man speaking with the bishop. Proklus waited again but, as usual, that man did not come out. Then he told the anxious official, go and pray to God for your needs, for I see now that it is still impossible for you to talk with him, neither today, nor tomorrow, not until God makes it possible. Proklus dared not disturb the Bishop when someone important was speaking to him, but he was puzzled and amazed.


When morning came, the Saint remembered his appointment and asked Proklus about the official, saying, perhaps his matter had been corrected. Proklus told the Saint that he had indeed come and had waited three nights for him, but could not see him. The Saint reminded Proklus that he did not come and tell him as he had commanded, also that he was to be admitted when he arrived.


Proklus said, I did come as much as ten times, but I could not speak to you, because a certain reverent balding man was standing over you and was speaking with you, and I did not wish to interrupt your conversations. Also I saw that you were deeply attentive to his words.

Then the holy Bishop asked: "Who is this person to whom I was speaking? Proklus said, Master, I do not know who that man was. Then as Proklus began to describe the man, he happened to look at the wall opposite the bishop’s desk. He saw an icon of St. Paul on the wall, and with one glance, and said: The man who was with you looked just like the Apostle Paul, whose icon you have before you when you write. St. John then understood that God hearkened to his prayer, and that it was God’s will that he should expound and interpret the Epistles of St. Paul, which are a great treasure of the Church, and that St. Paul himself had been his instructor.


Saint John then attended to the case of the court official, and the official was reinstated to his former honor. 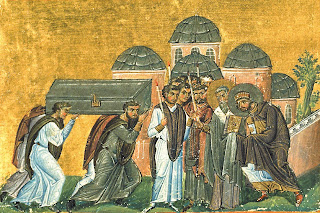 Looking at the faith, hope, love, and, deeds of St. John Chrysostom we see a glorious life of one of the most beautiful men who ever lived. He did nothing but good to everyone. He was a good friend, helper of the poor, the needy, and of people who were in trouble or suffering difficulties. How did the Empress and many of his bishops treat him? The same way the Pharisees and Scribes treated our Lord, considering him unworthy to remain on the earth, and during his second exile, this holy benefactor, weary and exhausted, rejoiced as he fell asleep in the Lord. His final words being, "Glory to God for everything!"


How wonderful is God in His Saints! Those who struggle under great difficulties performing the work of the Gospel and defending the holy Church, will always undergo some form of persecution, But they rejoice and are exceedingly glad for great is their reward in heaven!
Posted by Unknown at 7:46 PM