One-hundred and fifty-three years ago, in 1860,  a Protestant scholar, named T. J. Conant D.D.,  after complete and extensive research, published the results of his efforts in a book entitled: “The Meaning and Use of Baptism, published by the  American Bible Union, 350 Broome St, Bible Revision Association, Louisville Kentucky, 1860. (entered according to Act of Congress, in the year 1860.  By the American Bible Union. In the clerk’s Office of the District Court of the Southern District of New York).”  This is taken from the book which lies before me.

He researched in detail every possible source, hoping to solve a major denominational dispute which had arisen among Protestant sects.  This concerned the meaning of the Greek word baptizeis (baptize). Some considered immersion to be of no consequence, and others deemed it most necessary,  the author, however,  strongly supported the correct meaning, that baptism  always means immerse. Confounding the dispute was the biblical passage incorrectly translated:  “baptize with water”, instead of “baptize in water.”

Also affecting the discussions was the fact that the Papacy had given up immersion and had adopted pouring, followed by sprinkling. This influenced many Protestant groups to consider immersion as unimportant and even trivial.

But the greater dispute concerned the correct meaning of the word “baptize”as used in Scripture, known by all as a Greek derived word.  The author spent years of laborious and extensive research into Church history, the Greek language as used by the ancients, secular sources, poets, Church Fathers, the old testament, and Greek writers of old, seeking support for his firm personal conviction that baptism always means immersion. After concluding this extensive research, he became convinced that the Fathers, both eastern and western, and every other source, in every case, used the word to express immersion. He obtained the evidence he sought proving that immersion is the only correct translation of the original Greek word. In further support of baptism’s meaning,  the author quotes this statement of reformer Martin Luther: “Indeed. If you consider what baptism signifies, you will see that the same thing (immersion) is what it signifies.”

Upon finding the correct meaning of baptism after his extensive  research, the author summed up his findings in these words: “The act of baptism set forth in lively symbolism is the ground or basic thought of Christianity. The change in character of the believer (when baptized) was totally comparable to death . . . the suffering and death of Christ was the cause of the change (in the believer).” 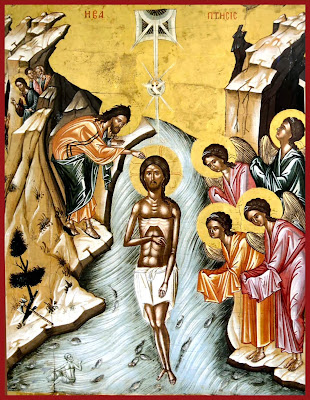 This researcher was sincere in his efforts, and his findings are in agreement with the scriptural and canonical practice of baptism by immersion as the immersions performed only in the holy Orthodox Church . The triple immersion of Orthodoxy needs to be zealously preserved clergy and laity alike, for the following reasons:

1. The triple immersion is to the glory and honor of our One God the Holy Trinity.
2.  Baptism or total immersion is a reality, not merely symbolic. The reality is that the baptized person dies in the death and burial of Christ. He dies to original sin, to the inclination to sin, to this world, and is snatched out of the bonds of imprisonment by the Devil.
3. Each of the three baptisms or immersions is followed by coming up out of the water into the resurrection of Christ.
4. It is the seal of the new covenant placed upon each believer, available only in the true Church.

When the Lord appeared to His disciples, He sent them as Apostles to the entire world: “And Jesus came among them saying: “All authority is given to me in heaven and on earth.  Go therefore, and teach all nations, baptizing them in the name of the Father and of the Son and of the Holy Spirit; teaching them to observe all things whatever I have commanded you, and lo, I am with you to the close of the age” (Matthew 267:18-20).

The extreme importance of baptism, as commanded by the Lord,  can be observed by the seal of every male infant of the old covenant, which was circumcision.  Circumcision was orered by God to Abraham, as a seal of their covenant, and this was practiced until the old covenant ended and was replaced by the new covenant. The law of circumcision of the old covenant was very strict and violation causes a severe penalty, for it is the seal of God’s covenant:  “The uncircumcised male who is not circumcised in the flesh of his foreskin on the eighth day, that soul shall be utterly destroyed from his family, for he has broken my covenant” (Gen. 17:14).

The seriousness of failing to circumcise, which is the seal of God’s covenant, and violation  incurred the death penalty, carries over to the seriousness of proper triune immersion baptism, in the name of the Father and the Son and the Holy Spirit. This designates that the persons are sealed with the mark of the new covenant, just as circumcision was the seal of the mark of the old covenant. In the new covenant, the seal is applied to women, not being the case in the old covenant.

The current practice of accepting converts by chrism alone is sorely flawed and in need of correction, which will occur when the Lord wills.  This is although Orthodox clergy have ruled that they do not accept the heretical baptism, yet they fail to baptize them, which means that converts, remain unbaptized, failing to bear the mark of the new covenant.  If they have been baptized outside the Church, there is no validity, thus no baptism.

But, let us be of good cheer, there is always  a way to correct the problem. All those who were brought in without true baptism should know, that if they so decide, it is pleasing to God and beneficial to them, to be baptized even after either chrismation or ordination. The evidence showing this to be so is found when Cornelius and all his house received the gift of Holy Spirit (chrismation) prior to baptism, and were baptized afterward by the Apostle Peter, as recorded in the Acts of the Apostles: “And they of the circumcision which believed, were astonished, as many as came with Peter, because on the Gentiles also, was poured out the gift of Holy Spirit. For they heard them speak in languages and magnify  God. Then answered Peter, can any man forbid water, that these should be baptized, who have received Holy Spirit as well as we? And he commanded them to be baptized in the name of the Lord” (Acts 10:45-47).

The truth is that those who without understanding have entered the Church without baptism are deprived of one of the greatest blessings from God which we all enjoy and delight in. The complete washing away of all sins, rendering a person purer than at their birth. For no matter what sins they committed before baptism, whether adultery or murder, are washed away in baptism, rendering them fit, if otherwise qualified, to become a priest or bishop.  Baptism is a glorious gift and it is unfortunate that our leaders fail to realize its value and necessity.  Chrismation does not plunge us into Christ’s death and raise us into His resurrection. The new wine, the gift of Holy Spirit, requires a clean vessel or wineskin,* especially if a person is to be ordained.

“May the  God of peace sanctify you completely, may your whole spirit and soul and body be preserved blameless until the appearance of our Lord Jesus Christ” (1 Thes. 5:23).