"UNLIFTED" ANATHEMAS OF THE PAPACY AGAINST ORTHODOXY

"UNLIFTED"  ANATHEMAS OF THE PAPACY AGAINST ORTHODOXY

Papal authority is not just faith and morals but everything!

Only total submission to the Pope – nothing less!

“If anyone say that the Pope has only the office of over-seer or of manager,  but not the full and supreme rulership of sovereignty over the whole Church,  not only in matters of faith and morals,  but also in the matters of discipline and of government of the Church throughout the world . . . let him be anathema.” (Vatican Council 1870).

These words from the Papacy about the Papacy are proof positive that it is not the Church of Christ, but the source of supreme arrogance.

In 1964 the unfortunate Latin-minded, Patriarch Athenagoras,  having first abandoned his own Orthodoxy, then  proceeding without authority,  he “lifted the anathemas”  against the papacy.   However it was an empty gesture, because as Patriarch he is not the Church.  No single patriarch represents the Church, for this is exactly what caused the Papacy to abandon the true Church.   Neither can anathemas  be lifted because they always are in force and permanent. They are issued against heresy and wrong belief.   A person under an Orthodox anathema can correct himself and come out from under the anathema, but the anathema remains permanently.  The papacy clearly shows its fraudulent intentions, for they cannot  lift their own anathemas against the  Orthodox, being outside of the authority of the Pope and the cardinals. They are indelibly inscribed in their canons as will be shown in what follows.

The following anathemas, formulated by the Pope of Rome  and the papacy remain in  effect against all Christians of the world who refuse to commemorate, recognize, and submit to the authority and discipline of the Pope of Rome being Christ’s infallible vicar. 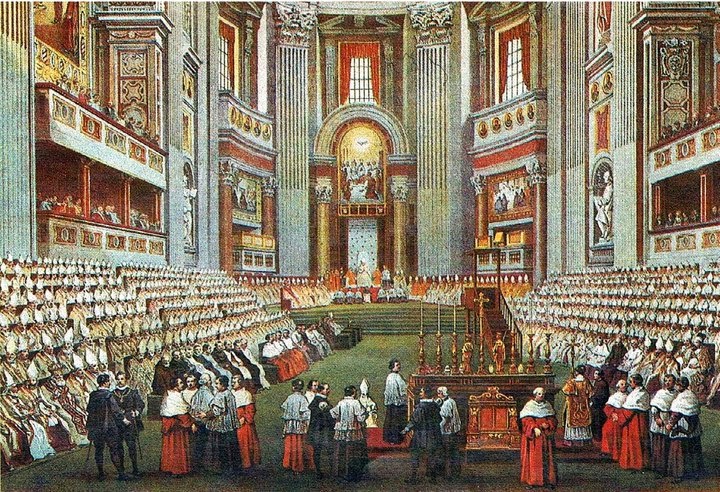 In the year 1870, (Vatican Council)  the Pope of Rome declared an anathema against everyone outside of the Papacy. That is, it was directed   against anyone  who refused to accept the Pope as  Supreme Pontiff,  infallible Head of the Church, the only successor of Peter and the Vicar of Christ.


They declare the Pope to be judge over the human races,  however no one can pass any judgement against the Pope, for he is untouchable, and infallible.  The following dogmas of the Roman Church are the Papacy’s  unlifted anathemas against every Orthodox Christians. They can never be revoke or lifted, even if they so desired, for without these dogmas  the entire foundation of the Roman church would crumble and collapse. Then the papacy which is not built upon Christ, but upon the Pope of Rome, will fall tumble down in a crumbling heap, for it is the fundament of papal power and authority.

“ When the Roman Pontiff speaks ex cathedra on matters of faith and morals . . .  as pastor and teacher of all Christians . . . he possesses the divine assistance promised to him and blessed Peter, that infallibility with which the divine Redeemer redeemed His Church. If any one shall presume to contradict this our definition,  let him be anathema.”

“If anyone say that the Apostle Peter was not appointed by Christ as the first and chief of the Apostles,  and visible head of the Church militant,  or that he received immediately and directly from Christ only honorary primacy,  but not the primacy of truth and essential jurisdiction,  let him be anathema.”

“If anyone say that Peter does not have continual successors in accordance with the ordinance of Jesus Christ Himself with respect to primacy over the whole Church, or that the Roman Pontiff is not by divine right a successor of Peter the Apostle in the matter of primacy,  let him be anathema.”

“If anyone say that the Pope has only the office of overseer or of manager,  but no the full and supreme rulership of sovereignty over the whole Church,  not only in matters of faith and morals,  but also in the matters of discipline and of government of the Church throughout the world,  or that this papal authority is not canonical and immediate,  not only in regard to each and every church,  but also in regard to each and every one of the pastors and of the faithful,  let him be anathema.”

These papal anathemas are permanent .

Dialogues with the Papacy are foolishness and betrayal of Orthodoxy!