THE CHURCH FOUNDED BY THE APOSTLES NOT ROME OR CONSTANTINOPLE

THE CHURCH FOUNDED BY THE APOSTLES
NOT ROME OR CONSTANTINOPLE 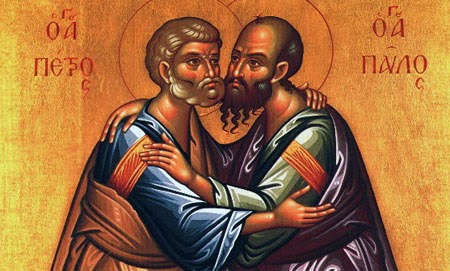 We honor Peter and Paul and claim no authority from either one, for we are under the same authority  as them, Jesus Christ our Lord. Peter was the son of Jonas and brother of Andrew the First-called, of the tribe of Simeon and the town of Bethsaida. Among the disciples Peter first gave the clear expression of our faith, when he said: “You are the Christ, the Son of the Living God. To this very day this remains the foundation stone of the One Holy Catholic and Apostolic Church, and is the necessary dogma that introduces every one into the Church.  Howe great was Peter’s love for the Lord, it increased over and over. But when the Lord went to His trial, Peter denied Him three times as the Master told him he would.  Christ corrected Peter with the threefold questions:; beginning with : “Peter, do you love me?

The day of Pentecost changed everything for now Peter and all the disciples were fearless and Peter the gave his first sermon to the Jews, resulting in 3,000 souls being baptized and saved.  He preached the Gospel in Palestine and Asia Minor, in Italy and also in Illyria; Peter performed many wonder, healed the sick, and raising the dead.  He did battle with Simon the Magician and defeated him, and was condemned to death. Peter went to His death by crucifixion with great joy, and asked to be crucified upside down, and he went to receive his crowns of glory.


Paul born in Tarsus of the tribe of Benjamin, was originally called Saul, and studied under the Pharisee Gamaliel.  He was wondrously brought to Christ by a brilliant and blinding light, and was told that he would preach to the nations.  Both Peter and Paul had great fear of God, without which there is not wisdom.

Paul preached the Gospel to the uncircumcised gentiles or nations, while Peter was the preacher to the circumcised or Jews.  There is perfect harmony between the two when they both adhere to truth, for their Master is the Truth who came down from heaven. We Orthodox must never forget who we are. We are not a church but the Church. We are not a body of Christians, but we are the Body of Christ. We do not belong to Peter or Paul but the Jesus Christ, who is our Lord and God

These two were important pillars of the Church, and Orthodoxy rejoices not in their rank or authority, but in their faithfulness and holiness of life. They radiate Christ wherever they went and their presence was similar to the presence of Christ who dwelled within them., being the reason for their great success. They did not "found" the Church of Romne or Constantinople, but the One Holy Catholic and Apostolic Church.

Orthodoxy alone can bear the name APOSTOLIC, for it keeps the faith of the Apostles and follows their 85 Canons, which guide the Church on its journey to heaven. A most marvelous thing about the Church founded by the Apostles is that it also has remained one, having one baptism, one chrismation, one priesthood, one doctrine, one liturgical life. All partake of the one cup of bread and wine which became the body and blood of Christ. The one Lord is our Master and Head, the one Holy Spirit unified us and is our guide, as the one Father has established.

This is the glorious Church of Peter and Paul.  This is the all powerful  Church against which the gates of Hades shall not prevail. This is the sacred Body of Christ and the Ark of Salvation. This is the only Church outside of which there is no salvation. Everything necessary for eternal life is found within her and is made available to everyone, no one being excluded.

On June 30, we celebrate the Synaxis of the Glorious and All-praised Apostles. We also should remember how they gave themselves to Christ;