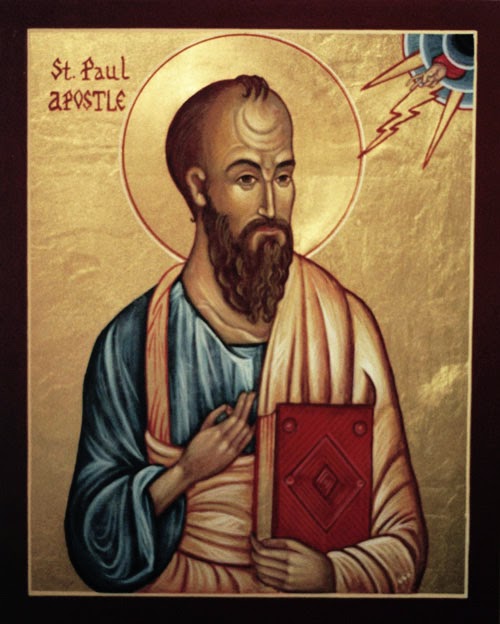 The Great Saint and Apostle Paul stands in a position where no one can resist the power of his words. Unbelievers, atheists, papists, protestants,  heretics and schismatics, in fact all those outside the Church are sternly rebuked  as enemies by the zealous example and teaching of this Apostle – the Apostle sent to the nations.

1. Paul was not seeking Christ for he saw the advent of the Messiah as being  a more  futuristic event, which could be understood through the law. Paul’s main effort was to persecute and jail  those who accept the one who he believed, was a false Messiah.  With great zeal he headed for Damascus to seize and jail al those who followed the teachings of Jesus..

1.  In extremely great light Christ appeared and spoke to Paul while on the road to Damascus. Paul was beside himself in fear and trembling being filled with amazement, even to the point of asking the Lord then speaking: Who are you?

2.  Paul did not receive the Gospel from Peter or any of the Apostles, but from Christ himself. As the other Gospels are perfect, this too is a perfect Gospel

3. Paul firmly establishes what Orthodoxy has always accepted to the shame of the papists who claim they got their authority from Peter.  Paul shows that Peter never had the authority which they falsely attribute to him.

4. Paul, did not go to Jerusalem to report to Peter, but set out, not for Jerusalem but for Arabia. “I conferred not with flesh and blood; neither did I go up to Jerusalem to them who were Apostles before me, but I went to Arabia, and then returned to Damascus. Then after three years, I went up to Jerusalem to see Peter” (Gal.1:16-18).

It is perfectly clear that no authority was vested over the others in Peter this being a papal innovation.  Christ himself assigned Paul his duties and the Holy Spirit was his guide. It is also clear for Christ sent Paul to Arabia where he preached for three years.

PETER NOT SENT TO THE NATIONS BUT TO THE JEWS
“But of those who seemed to be something, in conference added nothing to me. On the contrary when they saw that the gospel of the uncircumcised was committed unto me, as the gospel of circumcision was to Peter, for He who wrought effectually in Peter to the apostleship of the circumcision, the same was mighty in me toward the nations.”   Peter was not given to preach the gospel to the nations but only to the Jews or the circumcision.

Paul meets James, Peter and John, saying: they appeared to be pillars of the Church.

“Paul then rebuked Peter for his hypocrisy. “But when Peter was come to Antioch, I withstood him to his face, because he was to be blamed.  Fort before that James did eat with the gentiles, but when they were come he drew back and separated himself, fearing them which are of the circumcision. And the other Jews hypocritical did likewise, insomuch that Barnabas was carried away by their hypocrisy.  But when I saw that they walked not uprightly according the truth of the Gospel, I said unto Peter before them all; “If you, being a Jew lives among the gentiles, knowing that man is not justified by the works of the law, but by faith in Jesus Christ, that we might be justified by faith in Jesus Christ and not by the works of the law, for by works of the law shall no man be justified.”

The Jews believed that by keeping the law they could be saved, therefore they kept the law, and did it so well that they became proud.  They began to attribute their salvation to what they could do.  Quoting and justifying themselves by the terms of the law, they strove to keep the letter but failed to understand and keep the spirit.
Posted by Unknown at 7:46 PM