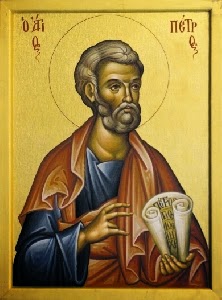 NOT PETER FOR
ONLY THE DIVINE COULD SUCCEED THE DIVINE

God alone is the irreplaceable Creator and Father and no one can take His place for He is uncreated, immortal and all powerful. Eternally the Father is giving birth to His Son and Logos, and the Holy Spirit who emanates from the Father. The three are one and the one are three. They are complete equal in nature and in essence, one God in Trinity.

Christ is the Head and Founder of His Church and being divine and human, His Church like Him, is also divine and human. Christ clearly shows who would succeed Him when He said: “My Father previously worked and now I work.”  The Father had established a covenant with Abraham and  through Moses and the Prophets with the Hebrew nation. He prepared man for the next phase of His work. When He sent His own beloved Son, to whom the Prophets bore witness and who says, now I work, and what a wonderful work, work of suffering His Passion, being mocked and crowned with thorns and crucified.
Christ promised that He would never leave us but be with us until the close of the age, and he established exactly who would succeed Him, not as a vicar or representative but the Lord Himself  to remind them of all that He said and  be their Comforter, the Holy Spirit of truth, the Spirit of Truth who proceeds from the Father and He will guide you and remind you of all my words. Just before His death on the Cross, Christ said: “It is finished”. It is finished for the victory was His, by His unjust condemnation and crucifixion.  Then fifty days after the Resurrection, on the day of  Pentecost, the Holy Spirit came upon them all just as Christ promised, and Church was energized brilliantly with light and life. For they were filled with Holy Spirit.


It is obvious that these sequences of events establish that which alone is possible, only God can take the place of God. First God the Father did His work, then God the Son did His work, and finally God the Holy Spirit is doing His work. No angelic power or human being can take the place of God as Head and Guide of the Church. The idea of any human being taking the place of Christ and the Holy Spirit is impossible to conceive, proving the fraud being committed by the Popes of Rome.

The Papacy alleges that: “Our Lord conferred onto St. Peter, the first place of honor and jurisdiction as governor of His entire Church, that this spiritual authority has always resided in the popes of Rome and  successors of Peter. Consequently, to be true followers of Christ, all Christians, according to the dogma of the papacy, clergy and laity, in order to be saved, must be in communion with the Pope and See of Rome, where Peter rules in the person of his successor, the present pope.”

Usually when a refutation is composed against this fraudulent claim of the Papacy, all the many aspects are taken into consideration. We will deal here with a single aspect which will also be sufficient to debunk their claim.

Was Peter the chief apostle in full command of the others?
Absolutely not.

The Church is divine-human with a divine human Head/
Only Divinity can succeed divinity.

If we follow the Church from the time of her establishment in Jerusalem, until the death of Peter, we will not find the least hint that the early churches were either united to St. Peter or subordinate to him as primate.  Further he was never in charge as the papists claim. For Scripture shows that at the council assembled in Jerusalem, it was not Peter but James who presided, here is the event.

The occurred in Antioch. “Certain men came from Judea to Antioch and began to teach that unless they be circumcised they cannot be saved, and had no small dissension and disputation among them. Then it was determined that Paul and Barnabas and certain others be sent to Jerusalem unto the Apostles and elders regarding this question.” Peter and Barnabas were at this time in Antioch.  The Apostles and Elder came together to consider the matter. Peter was one of the speakers, but it was not  Peter but James, Bishop of Jerusalem who presided and James gave the final decision: “I judge that they who from among the gentiles are converted to God are not to be disquieted, but that we write to them that they refrain themselves from fornication, and from things strangled and from blood.”

St. Paul, when he went to the apostles, did not refer to nor did he see Peter as the head of Apostles to whom he should report. Paul. Who had become an apostle later than the others, mentions what he actually observed. He describes that St. Peter and St. John appeared to be “pillars” (Gal. 2:9).

Peter tells us in his first epistle that he is “Peter, the Apostle” and calls himself, not the chief but  “a fellow elder”. There is not a hint of proof that the early churches were either united to Peter or subordinate to him in any way,  Peter never displayed authority over the others. This entire idea came out of the Vatican and is obvious false, thus truths of Orthodoxy have nothing. In common with falsehoods of the papacy/