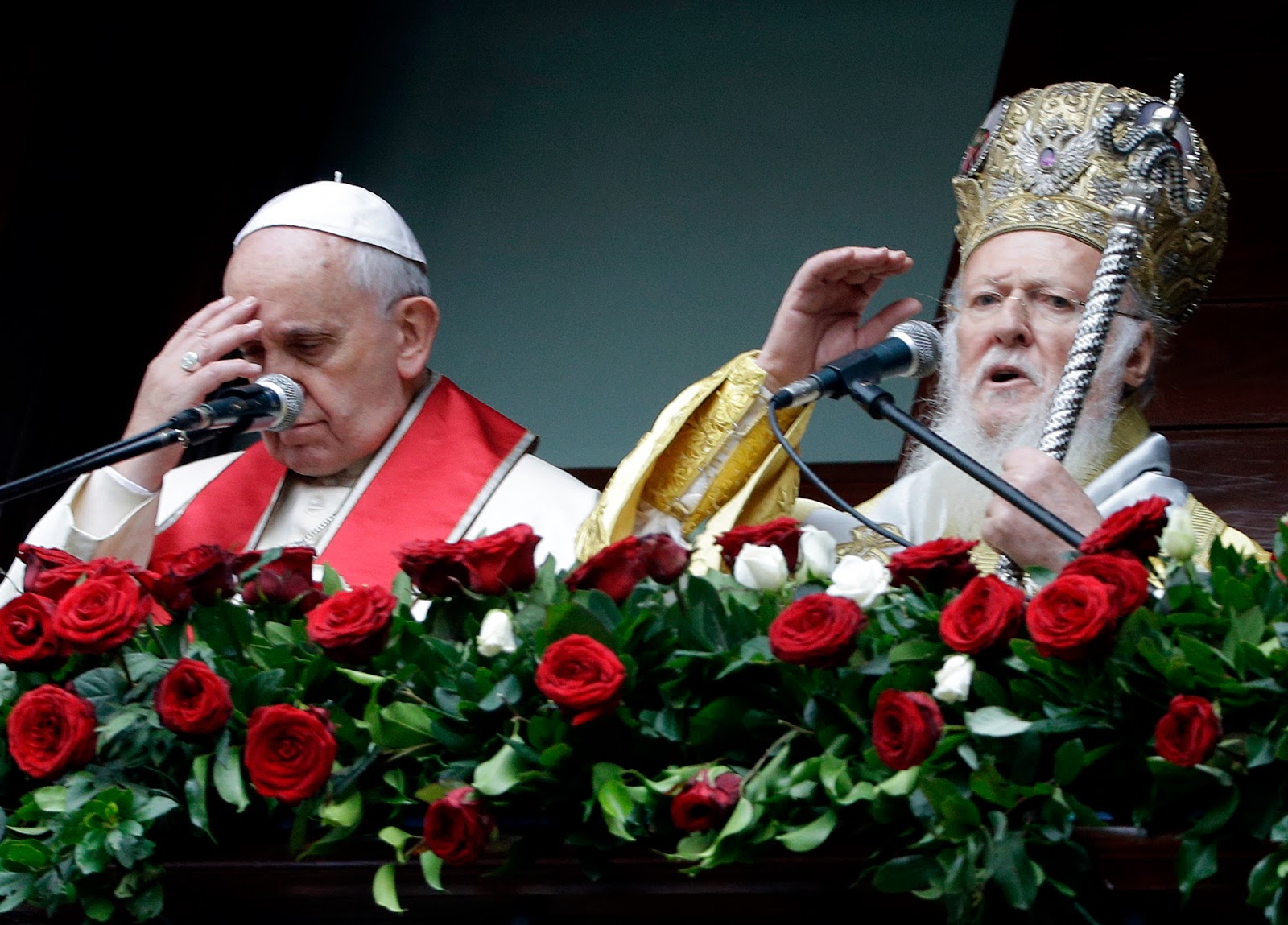 The pope’s visit to Constantinople and current discussion of uniting the true Church of Christ – Holy Orthodoxy, with the contrary papacy, but Orthodox Christian big and small must by duty respond id they wish to save their own souls, hence this article.

The Roman Church did not become the papacy overnight it was a gradual process. This is a  contribution toward understanding the truth as why the papacy was dis-united or separated from the Orthodox Church for a over a thousand years. We will mention some changes in the papacy preceding and following their apostasy from Orthodoxy, which should have been examined by  hierarchical “negotiators” prior to any talks.

It is an undeniable fact that Orthodoxy is the Church,and anyone who denies this has forfeited his Orthodox beliefs.  Orthodoxy never separated from the Roman Church, and it is foolish to say so because Orthodoxy is the Church of Jesus Christ and is our Head.  The Roman church was once a part of the One Holy Catholic and Apostolic Church. However the Latins changed the Roman Church into the papacy headed by an infallible pope The cause of the papacy being dis-united or separated was and remains until this day their descent into blackness of supreme arrogance which floods the minds and hearts of the Roman Catholic leaders.  For this arrogance instigated them to descend to the  depths of folly and insanity, which St. Photios describes. for they not only laid claims to be “the only Church” but they introduced numerous heresies, and even changed the changeless creed of our Faith. They have waged war against Orthodoxy since before the time of the Crusades, during the time and in modern times they continue the same warfare, maiming and killing Orthodox Christians, who refuse to become their followers or papists.

The Papacy has never denounced its numerous heresies nor have they got rid of one of them, nor have they repented. They seek union under their dominion without abandoning there errors and without returning to the true Church, and having not done so, talks of union by the Orthodox bishops constitute a betrayal of Orthodoxy, and a sinful waste of time. What error has the papacy corrected?  What changes have they made by abandoning serious heresies  and embracing truth? What lies and blasphemies have they stopped telling and confessed?

They have a history of turbulence and violence, bloodshed and insidious torture during the thousand years they remained outside the Church. They gave a bad name to Jesus Christ, posing as His vicar?  Instead of fasting popes lived deliciously enjoying the delightful lives of the flesh. Example: (The hands of pope Nicholas V were stained with the blood of Porcaria and nine of his confederates, who were hanged from the battlements of St. Angelo. The crime of   Stefano Porcari was that he urged his countryman to ask the new pontiff to give them constitutional liberty. Pope Sextus who succeeded Pope Paul II had several illegitimate sons who, for enriching them, seized the estate of one of the nobles of Romagna.  The pope formed a plot for the assassination of Lorengo’s whole family in revenge of him because he interfered on behalf of the injured man. For two years this so-called Vicar of Christ filled northern Italy with bloodshed and terror, and if it were not for the Turks entry into Italy and taking Otsanto. God only knows what he would have committed of crimes and iniquities)

A  trail of blood follows her, by her bloody crusades, by her tortuous inquisitions, and by her violent persecutions, and in the 1940's. their hands were dripping in  blood during the slaughter of 750,000 Serbian Orthodox during WWII, which was so gross, it even shocked the cold-blooded Nazis.  In order to see the supreme arrogance of the popes, printed below is their anathema issued only a little over a hundred years ago.  Here it is seen clarity their vicious  arrogance as well as their claims to superiority over the whole world, and why the want to seize Orthodoxy. They have never denied this anathema which remains in force! Their arrogance will not permit their changing anything!

THEIR CLAIM: THE PAPACY ALONE IS THE CHURCH

PAPACY IS THE RULER OF ALL!

“If anyone say that the Pope has only the office of over-seer or of manager,  but not the full and supreme rulership of sovereignity over the whole Church,  not only in matters of faith and morals,  but also in the matters of discipline and of government of the Church throughout the world . . . let him be anathema.” (Vatican Council 1870)

This document alone, which demands that the whole world must be subject to the pope should cause us to despise the papacy which overthrows everything that Jesus Christ taught. Talks of union with the papacy and such ideas are an insane and most blasphemous attack on the divine truths by those bishops who claim to be the heading Christ’s Orthodox Church, yet do not recognize her exclusivity!
They bow to the enemy, embrace and kiss him, pray with him, consider him a bishop and recognize his sacraments. Obviously they have broken their vows as bishops to uphold the Orthodox Faith.

What has gone wrong with Orthodox bishops who are shouting cries of union with the papacy? What has gone wrong with Orthodox Bishops who say there is no union with the papacy, but call them a sister church?  What has happened to Orthodox Bishops, whose spiritual eyesight is so badly impaired that they see Orthodoxy and the papacy as one?  If there is no union, why do they bestow honor on the popes who are obvious inimically disposed toward Christ and His true Church?

Bishops know full well that Christ, the Apostles and the sacred Canons all command that there is one baptism using three total immersions, which Orthodoxy uses and has preserved. Why do they recognize papal and protestant’s “baptisms” which are not baptisms as commanded by Christ and the Apostles. The command to baptize in the name of the Father and the Son and the Holy Spirit comes from Christ himself

Even use of the word union is very Un-Orthodox, for union testifies to a split in the holy Church which never has not and never will happen. For such a union would destroy the very essence of Holy Orthodoxy, and turn Orthodox Christians into papists with an Eastern rite like the Uniates.

Without their admitting to the countless sins against God and man, union without denying their arrogant claims to superiority, talks are foolish. They have not denied the insane infallibility of popes, their use of unleavened bread, their filioque, their purgatory, their created grace, and their many anthemas and tons of countless documented crimes. Thus talk is a waste, embracing the pope is a sin, recognizing their validity is even worse. Then why, suddenly like a bolt of lightning, during this century, Orthodox ecumenists and unionists, have made union overtures the most important subject of all. Former Patriarchs of Constantinople have said these same things as we are saying here,  but not today’s leaders. In fact they have already formed a union by addressing the papacy as a sister Church. They degrade the true Church as being one lung of the papacy. These bishops are not faithful to Christ or Orthodoxy. Knowing the many crimes of the popes, why do they recognize the popes, their clergy, their sacraments, or their Christianity. The papacy’s  history totally contradicts the presence of genuine Christianity.

What of the “great schism”?  There is a problem with the misnomer “schsim”.  It needs to be renamed for what it actually was and has remained – “the great apostasy.” If anyone looks at the history of the apostasy of the church of Rome he will see that this designation is correct. The fact that they have popes, cardinals, bishops, priests, and deacons, and many other things means nothing.  When it comes to truth and the true faith, what is true is of prime importance. If you look only for details, you will get lost in the jumble. Look at precisely what took place in their history.

In the eyes of the world, which seldom see things correctly, the world sees the Roman Papacy as the original true Catholic Church. When you ask people who is closest to God, they will instinctively reply: “The pope.” The claim to be the true church is easily believed by those who are not yet seeking for truth.  Orthodox leaders who are committed to union with the papacy, should know better and by their denying Orthodoxy’s exclusiveness,  have already surrendered their own Orthodox faith, and thus cannot be reasoned with nor can they be saved. For all falshood is from the evil one.

The Latin addition to the Creed: (Latin filioque meaning “and the Son” was enacted, and caused it to read “the Holy Spirit who proceeds from the Father and the Son.”  This is a heresy that was condemned by St. Photios the Great and in his Mystagogy of the Holy Spirit he branded the papacy as insane with this heresy. Photios wrote this over a thousand years ago. Instead of bringing  this heresy up Orthodox leaders consider the heresy unimportant, which means they are misleading us.

The Protestant reformers erroneously believed that the corrupt papacy was the original church, and with this erroneous belief, they sought to reform it and return it to what it was meant to be. Instead of reforming the papacy they made things thousands of times worse, causing divisions everywhere. It is obvious that the Papacy with its evils spawned the Protestant movement. Both parties fail to hearken and obey the Holy Fathers, the Ecumenical Synods and the Holy Tradition of the Church.

Truth is invincible and Christ is the Living Truth from heaven and is in and came from the bosom of the Father. He is  divine and human as is the Church which He heads. As Christ cannot be destroyed, so His Orthodox Church, although now under severe attack will remain for ever. Amen