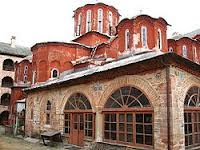 From the Library of the Holy Koutloumousiou Monastery
Mt. Athos, Greece.
1.   Great European War
2.   Defeat of Germany, Catastrophe of Russia and Austria
3.   Defeat of the Hagarenes (Turks) by the Hellenes (Greeks)

4.   Reinforcement of the  Hagarenes  (Turks)
5.  Slaughter of the Orthodox peoples
6.   And great anxiety in the Orthodox peoples.
7.   Invasion  of  foreign troops  from the  Adriatic Sea.
Woe unto  those  who live  on earth;  for Hades is ready.
8.   The Hagarene is great for a moment.
9.   A new European War
10.  Union of Orthodox peoples with Germany.
11.  Defeat of the French by the Germans.
12.  Revolution in India and its separation from England
13.  England left to the Saxons alone.
14.  Victory to the Orthodox peoples and general slaughter of
the Hagarenes by the Orthodox.
15.  The world in anxiety.
16. General despair on earth.
17.  A battle of seven states in Constantinople. Slaughter for                   three days and three nights. Victory of the largest state over the  six states
18.  Alliance of six states against the seventh one; slaughter for   three days and for three nights.
19.  Cessation of the war by an angel (of God and of Christ), and delivery of the city to the Hellenes.
20.  Submission of the Latins to the faultless Faith of the Orthodox believers.
21.  The Orthodox Faith shall move outward from East far into the West
22.  The barbarians fearing and trembling at it.
23.  Discharge of the Pope, and proclamation of one Patriarch for all Europe.

From 1 to 13 have been already fulfilled, the thirteenth being the dissolution of Great Britain. 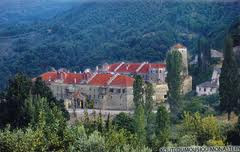 
World War I began in  1914 and the spark that set the world on fire was the  assassination of Archduke Francis Ferdinand,  heir to the throne of Hapsburg Austria-Hungary kingdom  at Sarajevo. Germany and Austria-Hungary were joined by Turkey and Bulgaria. On the other side were France, Russia,  Serbia, and Belgium, Italy and later the United States of America. Poison gas and machine guns were used as well as flame throwers and submarines. It involved 40 countries. FN *

2.   Defeat of Germany, Catastrophe of Russia and Austria

Allies defeat Germany  and the  Kaiser
Along with Germany’s defeat. Europe changed
End of the Hapsburg Empire of Austria-Hungary,
End of the Russian monarchy and slaughter of the royal family
Communists take over Russia (70 year captivity)

3.   Defeat of the Hagarenes (Turks) by the Hellenes (Greeks)

Victorious struggle of the Greek Army against the Turks in Asia Minor. Treaty of  Sevres August 10, 1920 between the West and the Ottoman Empire, after WWII. The Ottomans (Turks) signed the treaty a victory for the Greeks, but a republican government that followed ignored it and treaty was never in effect.


4.   Reinforcement of the Hagarenes  (Turks)


The great and magnificent Ottoman Empire had been reduced to a mere shadow, but  Kemal Ataturk now begins the process of westernizing Turkey, and for this reason he receives  ample   support  and reinforcement from Western countries, who sadly abandoned Orthodox Greece and increased their support of the enemy of Greece and Christianity, whom they previously held in captivity for over 400 years, the inimical Turks

This is some of the support given to bellicose Turkey by the Western nations.  Here is some of the help given by western nations which assisted the Turks:   England, France and other  nations helped Hagarenes  The heretical West increased strength of the weakened Turks. Turkey’s public debt of  250,000,000,000 franks. Of this 60.31% was owed to France, 14.9% was owed to England, and 21.31% was owed to Germany. The West busily helped the enemy of the Greeks, as they built banks, railways,  ports, electric power plants, telephone systems,  tramways, etc.  Thus they strengthened, Mustafa Kemal’s regime. Due to this new assistance, The Turks went on a campaign to burn the city of Smyrna and slaughter its Christian populace.

5.  Slaughter of the Orthodox peoples

This took place in Asia Minor
Under the rule of Kemal Ataturk, the military went into action with the intent to massacre  all the Christians, including Armenians and Orthodox. They burned down the beautiful city of Smyrna methodically and deliberately so as to destroy property along with Christians.  Soldiers in uniform went into house after house with petro or benzine and set one after another on fire. Some stayed by the door and when people tried to exit to escape flames, forced them back in with pointed bayonets. This barbaric action was observed by the American Consul General; George Horton and he recorded everything in a book called the BLIGHT OF ASIA, which is available in print and on the internet. From 1894 to 1923  Turks killed over 1,750,000 Greek Orthodox Christians


“The last act in the fearful drama of the extermination of Christianity in the  Byzantine Empire  was the burning of Smyrna by the troops of Mustapha Kemal. The murder of the Armenian race had been practically consummated during the years 1915-1916, and the prosperous and populous Greek colonies, with the exception of Smyrna itself, had been ferociously destroyed. The idea has been widely circulated, and seems to be gaining credence, that the Turk has changed his nature overnight.”


6.   And great anxiety in the Orthodox peoples.

Due to the slaughter of Asia Minor


A year after the slaughter and burning of Smyrna, the Western powers  recognized the Turkish government of Kemal Ataturk, under whose regime the slaughter took place.

Note: Under Communism in Russia 66.5 million, many  who were
Orthodox Christians were killed

7.    Invasion  of  foreign troops  from the  Adriatic Sea. Woe unto  those  who live  on earth;  for Hades is ready.

8.   The Hagarene is great for a moment.


The new regime in Turkey under Mustafa Kemal Ataturk, ruled during the slaughter of the Greeks and Armenians, especially in Smyrna which was destroyed with its inhabitants. The Greeks were completely driven out of Smyrna, and at Inonu they were defeated in 1921. The Turks attempted more assaults but were prevented by the West. Thus the Hagarenes were great for a moment under Mustafa Kemal.  Ataturk did away with government by the Koran, dressed in western clothes and introduced western ideas into Turkey; he was educated in the west.


Adolph Hitler of Germany, Mussolini of Italy and Emperor Hirohito of Japan were known as the axis powers. The war was between the Allies and the Axis powers, Germany,  Italy and Japan.

Most of the US Atlantic and Pacific naval fleets were destroyed, when Japanese planes attacked the US by bombing Pearl Harbor in Hawaii, destruction and loss of life was immense. This day is remembered on December 7th each year. The President at that time, FDR called it a day of infamy. The atomic bombs were first used bombing two Japanese cities, Nagasaki and Hiroshima.


10.  Union of Orthodox peoples with Germany.


Bulgaria and Romania, both Orthodox nations entered the war on Germany’s side.

German victory in June 1940 had profound consequences. For the British and French, it was the worst possible outcome. France was defeated, its northern half as well as its Atlantic coast occupied by German forces. Britain was isolated from Continental Europe and had no prospect of reentering it to dislodge Adolf Hitler without the help of powerful allies (i.e., the United States and Soviet Union). France was now ruled by the authoritarian Marshal Philippe Pétain, who set up a new government center at Vichy, where his regime pursued policies that mimicked those of other Fascist states


12.  Revolution in India and its separation from England


Due to Mahatma Ghandi and his peaceful resistance and fasting on August 1947 India received independence from England.  Mahatma Ghandi was to receive Nobel Prize, but he was  assassinated in 1948

13.  England left to the Saxons alone.


The following prophecies have not been fulfilled.


14.  Victory to the Orthodox peoples and general slaughter of the Hagarenes by the Orthodox.

Perhaps when WW III appears on the horizon


Possibly out fearful rumors that rulers are considering the use of  nuclear bombs.


17.  A battle of seven states in Constantinople. Slaughter for three days and three nights. Victory of the largest state over the six states.

This terrible slaughter is mentioned by St. Kosmas Aitolos: In Constantinople so much blood shall be shed that a three year old calf will float in it.

And they will run through the passages and streets of Eptalofos (Constantinople) and the slaughter of men will cause a river to start and move and the sea will be blurred from the blood to the depths of the abyss. (St. Methodius of Patara))

18.  Alliance of six states against the seventh one; slaughter for three days and for three nights.


19.  Cessation of the war by an angel (of God and of Christ), and delivery of the city to the Hellenes.


20.  Submission of the Latins to the faultless Faith of the Orthodox believers.


The Papacy after  apostatizing from the true Faith arrogantly  posited itself as the one only Catholic Church of Christ. But it had abandoned the Church, establishing the Papacy, thus ceased to partake of the life of the Catholic Church, with no communion or agreement between the Church and the Papacy, for it fell into many heresies. The Church has always had Christ as its head, they replaced Him with the Pope. As the Holy Spirit has always been the Guide of the Church, as is recorded repeatedly in the Acts of the Apostles, they made the Pope their guide.

They abandoned the Church, governed by Synods bound by decisions of the seven ecumenical synods, the Papacy went on to create false dogmas, novel sacraments, false interpretations, baptism replaced by little  drops of water, unleavened wafers for communing, and a new revised creed contaminated with their false belief.  It morphed from a church to the Vatican State having one-man absolute rule, and then shook the whole world, causing angels to hang their heads and weep, they declared a sinful man to be perfect and infallible.  This prophecy shows the ultimate end of the Papacy and the return of its followers to the Orthodox Church.


21.  The Orthodox Faith shall move outward from East far into the West.


Preserved in the East, the Orthodox Church, though undergoing terrible persecution, by the grace of God, kept the faith intact, due to its being headed Jesus Christ and guided by the Holy Spirit. There is a  prophecy of St. Agathangelos who prophesies that Germany will be instrumental in bringing Orthodoxy from the East to the West.


22.  The barbarians fearing and trembling at it.

23.  Discharge of the Pope, and proclamation of one Patriarch for all Europe.


24.  In five and fifty years the end of the afflictions; and in the seventh there is not a miserable man, there is not a banished man; returning to the Mother’s rejoicing arms (i.e. the Church). So shall it be, and we wish that it be.


The end. One flock and one shepherd shall there be, from the true Orthodox faith.


We wish that it be done.


(A slave of the true God’s Christ)