THE CHURCH OF CHRIST VS THE MANY CHURCHES

THE CHURCH OF CHRIST


vs
THE MANY CHURCHES
"You are Peter and upon this rock I will build my church." 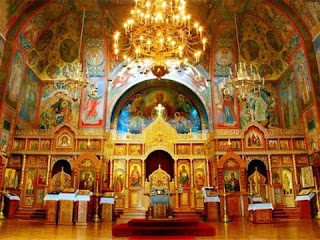 The Church, its origin and its constant presence is vital and important to those interested in Jesus Christ, the Resurrection and their own eternal life. Christ declared, of Peter’s answer to Him:
"You are the Christ, Son of the Living God." Early in the second millennium, the western church apostatized from the One Holy Catholic and Apostolic Church – Orthodoxy, and proceeded to form the Papacy, they distorted the meaning of Christ’s words, used forged and false decretals, constructing their house of cards. They proclaimed that Christ built His Church on Peter who is the rock or foundation stone of His Church. However, Peter denies this, clearly saying concerning Christ: "Whom, coming to us as a living stone, disallowed indeed of men, but chosen of God, precious, you also, as living stones, are built up into a spiritual house, a holy priesthood, to offer up spiritual sacrifices, acceptable to God by Jesus Christ. Wherefore it is also contained in Scripture: Behold, I lay in Sion a chief cornerstone, elect, precious; and he that believes on him shall not be confounded. Unto you therefore which believe He is precious, but unto them which are disobedient, the stone which the builders rejected, the same is made the head of the corner, a stone of stumbling and a rock of scandal to them which stumble at the word, being disobedient" (1 Peter 2: 4-8).


Certainly, the divine Scripture is not speaking of Peter but of Christ. Christ did not teach us to believe in Peter but in himself, saying: "The words that I speak are spirit and life."

This testimony firmly established that it is in reference to Jesus Christ: who is "a chief cornerstone, elect, precious; and he that believes on him shall not be confounded." Thus the mythology of the Papacy’s claim as being the true Catholic Church is crushed to powder by the pure stone of truth.


All Christian sects, collectively called Protestants, blundered, and made things even worse, for after leaving the Papacy they went further and further away from Christ and His Church. Their first error, was not believing Christ’s firm promise that "the gates of Hades would not prevail against His Church." The Protestants knew well that the gates of Hades had, not only prevailed, but swallowed up the entire Papacy. They witnessed its corruption, lies, crusades, murders and its whoredom. In ignorance of truth, they thought that the "Catholic" church was the true church now corrupt. Luther was approached with representatives of the True Orthodox Church, but did not show interest, for he had his own agenda. So the Protestants first error set the tone for what follows. They claimed to be reformers who were going to straighten out the corrupt church, which Christ failed to protect, and fix it.


They were inflamed by a hostile mania to destroy and desecrate everything with which they disagreed. They planned to re-spiritualize the dead church and bring it to life! so they threw out the church structure, most sacraments, candles, relics of Saints, incense and icons. Eventually they established their second great error: sola scriptura, or only the scriptures. This caused them to collide head on with St. Paul in the divine Scripture, who proclaims that we stand firmly in both oral and written tradition, which the Protestants consigned to oblivion, showing their disdain for the Apostles, Ecumenical Fathers and Early and late Fathers, nor do they commemorate them. Why?  Because in their super-egoism, they appointed themselves as super-reformers, who would sanctify the  corrupt church of Christ, and they would get rid of material things and make it totaslly spiritual!  What supreme arrogance is seen in the reformers, disregarding Christ's firm promise that the gates of Hades would not prevail against His Church. Little did they know that the Papacy is not the Church  and seat of Jesus Christ. The Papacy openly says the same thing, for they call it Peter's Church, the See of Peter! 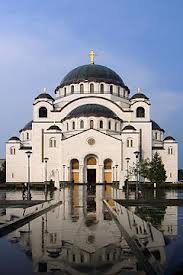 What was the result of their separation from the Pope and Papacy? They divided and divided and subdivided, they were united in nothing, divided in everything, evolving over the years into many thousands of different sects, formed according to their own decisions, thus every Protestant became a pope with full authority. This division conflicts with the call for Scripture to be of one mind with each other, for we must all believe in the same revealed truths. They continually insult the Holy Theotokos, and instead of honoring her, treat her like a common woman. They insult Christ himself, and all the Saints, and deny the clear teaching of Christ in the Gospels. Like little kids in a candy store, they pick and choose whatever meets their fancy, at some particular time.


Foolishly, some Orthodox leaders have chosen to meet with these sectarians and in doing so, contrary to the Scripture’s forbiddance, they jeopardize their own salvation, and fail to offer help to the hopelessly divided Protestants, who use the Orthodox for their own prestige before the world. Called ecumenism, this process introduces something totally foreign to the life of the true Church, and the solemn duty of every Orthodox Christian. For we are all called upon to give a good witness, to proclaim the truth, defend the truth and live by the truth. For there is no salvation to those who are separated and are not baptized in Orthodox triune Baptism. Christ declares these truths and they remain true, for let every man be a liar, but let God be true. "Go and preach this Gospel to all nations, baptizing them in the name of the Father and the Son and the Holy Spirit" (Mat. 28:19).


The great tragedy of ecumenism, which is about a hundred years old, is that the participants are not hearing the truth. They all must abandon all of their false beliefs, accept the truths of the Church, be baptized by triune immersion and then catechized into the true Church. This will enable them to partake of the Fountain of Immortality, the Body and Blood of Christ, without which, according to Christ, they have no life in them and are headed toward perdition. This is urgent for God desires the salvation of every soul. 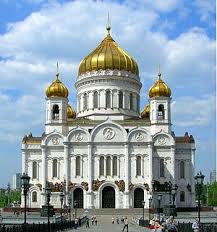 Orthodoxy, the true Catholic Church, stand firmly on the rock of faith – that Christ is the Son of the Living God. This Church is enthroned by God the Logos and comforted and guided by God the Holy Spirit; no man is ever in control, for it is the Body of Christ our Creator. None of us can change the Faith, but we follow its truths which lead to salvation and then pass it on unchanged to the next generation for their salvation and eternal life.   We never forget, that we and every human on the face of the earth must appear and be judged by Jesus Christ our King and God. Let us reflect on these truths. Every one of us must die and must give an account for what we did with our lives. It is written that those who believe a lie will not be saved. We will have to give an answer as to why we did not search and find out for sure, for there is only one chance given us by the Creator.  This present life is our only chance to live forever in the Kingdom or end up in torment separated from God for ever. That is why, Christ says: "Search the Scripture for in them you think you have eternal life."

Upon entering the true Church through the door of Baptism, those who abandon their errors and embrace divine truth, will experience a new and blessed life, a life of perfect peace and continuous joy, a life of harmony filled with the divine Spirit, and the assurance that they will one day hear the sweet words of Christ: Come you blessed into the kingdom prepared for you!
Posted by Unknown at 4:27 PM