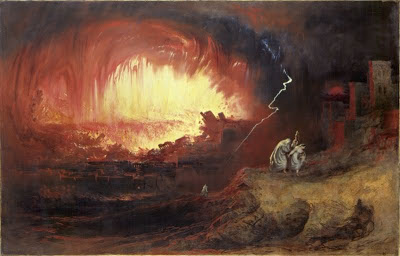 The Scriptural divine words herein speak against all manner of sin, for it does not matter which sin we commit, for both small and great sins separate us from the kind and merciful God of love and peace. Sexual sins rage like a roaring fire in the modern world, affecting young and old alike. Sodomy however, is singled out in both the Old and New Testament as something to be avoided at all costs. St. John Chrysostom says that a young man should prefer death to this sin.
re HOMOSEXUALITY:


"And the two angels came to Sodom at evening. And Lot sat by the gate of Sodom, and Lot having seen them rose up to meet them, and he bowed his face to the ground, and said, Lo, my lords, turn aside to the house of your servant and rest from your journey, and wash your feet, and having risen early in the morning you shall depart on your journey. No, we will lodge in the street. And he constrained them, and they turned aside to him, and they entered into his house, and he made a feast for them, and baked unleavened cakes for them and they did eat.


But before they went to sleep, the men of the city, the Sodomites, gathered all around the house, both young and old, all the people together. And they called out to Lot, and said to him, Where are the men that went in to you this night?

Bring them out that we might have sexual intercourse  with them. And Lot went out to them to the porch and shut the door after him, and said to them, Brethren, by no means do not act wickedly. But I have two daughters who have not known a man. I will bring them out to you to do as it may please you. Only do not do injury to these men, to avoid which, they came under the shelter of my roof. And they said to him, Stand back there, you came as a sojourner, was it also to play judge? Now then we would harm you more than them. And they pressed hard on Lot, and they came close to breaking down the door. And the two (who were with Lot) stretched forth their hands and drew Lot into the house with them. But the men (angels) inside reached out and pulled Lot back into the house and shut the door. Then they struck the men who were at the door of the house, young and old, with blindness so that they could not find the door". (Gen.19:1-11).


The angels then told Lot to escape from the cities and not to look back, but go to the mountain. And the Lord rained fire and sulphur out of heaven, destroying everything and everybody. They all left this world instantly without warning, which is the way many people die in their sins. It is a fearful thing for sinners and unbelievers to fall into the hands of the God of heaven and earth.
The Sodomites lived only for passing delights  of  fleshly pleasure, delights of parties and "having fun", laughing, joking,  making merry with each other in sins and iniquities, having no belief that they must answer for their irrational unbelief and actions. They increased their sins to blasphemous desire and demand to have sexual intercourse with the two angels from heaven! 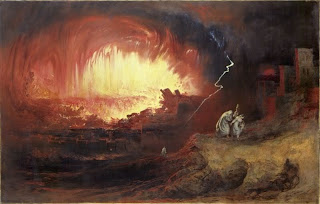 
"And you shall not have intercourse with a man as with a woman, which is an abomination. Neither shall you lie with any quadruped for copulation to be polluted with it. Neither shall a woman present herself before any quadruped to have connection with it, for it is an abomination. Do not defile yourself with any of these things for in all these things are the nations defiled, which I drive out before you, and the land is polluted"     (Lev.18:19-25)
"Even as Sodom and Gomorrah, and the cities about them in the same manner gave themselves over to fornication, and going after strange flesh, are set forth for an example, suffering the vengeance of eternal fire. Also in the same manner, dreamers defile the flesh, dispute authority and blaspheme them"                 (Jude 7). 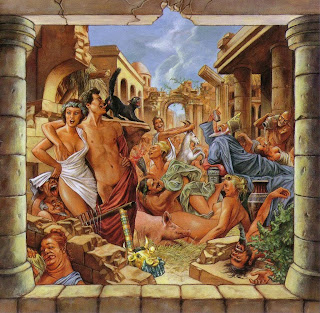 The divine St. Paul:
"Now the end of the commandment is love out of a clean heart, and of a good conscience, and sincere faith, from which some have turned aside into vain and useless talk, desiring to be teachers of the law, failing to understand what they say nor what they affirm. But we know that the law is good, if a man uses it lawfully, knowing this, that the law is not made for a just man, but for the lawless and disobedient. For the impious and profane, for murderers of fathers and murderers of mothers, for manslayers, for whoremongers, for homosexuals, for slave dealers, liars, for perjurers, and if there be any other thing contrary to sound doctrine, according to the glorious gospel of the blessed God, which was committed to my trust "                (1 Timothy 6-11).
"Do you not know that the unjust shall not inherit the kingdom of God? Be not deceived, neither fornicators, nor idolaters, nor adulterers, nor masturbators, nor homosexuals, nor thieves, nor covetous, nor drunkards, nor revilers, nor extortioners shall inherit the kingdom of God. And such were some of you; but you are washed; you are sanctified, you are justified, in the name of the Lord Jesus Christ, and by the Spirit of God"       (1 Cor. 6:9-11).
"Claiming themselves to be wise, they became fools, and changed the glory of the incorruptible God into an image made like corruptible man, and to birds, and to four-footed beasts, and creeping creatures. For this reason God also gave them up to uncleanness, through the desires of their own hearts, to dishonor their own bodies between themselves, who changed the truth of God into a lie, and worshiped and served the creature more than the Creator who is blessed for ever. Amen. Thus God gave them up unto vile affections; for even their women did change the natural use into that which is against nature; and in the same way, men, abandoning the lawful function of the woman, were inflamed in their desire toward one another; men with men, with shameless needs and their penalty"                           (1 Rom. 22-27).
All sin separates us from God and His divine kingdom, some are more difficult to abandon through confession and repentance. Sinners will all end up separate from God which is in itself torment.

THE CRY OF ORTHODOXY to all mankind is: Repent! For the kingdom of heaven is here. Come and be baptized and enter a life of joy instead of misery. To Jesus Christ who came being the Light of the world, ascended the Cross, suffered and died and rose from the dead on the third day, in order to take all of us to heaven and to enjoy happiness in this present life!
Posted by Unknown at 10:02 AM