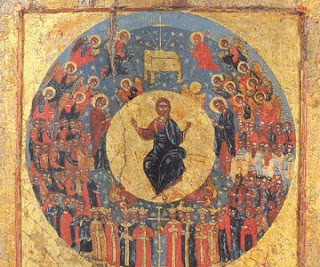 What is a Saint? In the Orthodox Church, every member is repeatedly referred to as a saint, and this is the purpose of the Church, to sanctify and glorify its members, for the Church is the Kingdom of God on earth. Some members advance in piety and outstanding holiness which causes the faithful to honor and glorify them long before their falling asleep in the Lord. Saints are not made by numbering a few miracles, but by their pure and holy Orthodox lifestyle, which renders a saint to become like Christ. Icons of such saints often appear shortly after they leave this world, and churches are built in their name, as the faithful recognize their great sanctity, seeking to glorify and remember them. Orthodoxy does not canonize a saint, but glorifies them and a date is set by the hierarchy for his official glorification by the Church.


At every Divine Liturgy we hear shortly before Holy Communion: "The holy things to the holy." "To the holy" is better understood as "to the saints," for we are all called to live an undefiled and pure life as becomes saints, agreeing with Christ’s commandments: "Be holy as I am holy," and "Be perfect as your Father in heaven is perfect." Each one of us will be without excuse if we fail to struggle and acquire holiness, for nothing unclean can enter the kingdom of heaven. If we die without repentance and fail to seek holiness, what can we expect, for while God shows His mercy in this world, we will be judged by what we have done in the world to come.

For this reason, it is very important to read the lives of saints whenever possible, so as to see the struggle by a person in every day actions Let us look at an outstanding saint: St. Myron of Knossos in Crete, who fell asleep in the Lord on August 8, 350 AD


St. Myron life lived up to his name, for he was overflowed with divine myrrh. His life was transformed into a sweet aroma of myrrh. He was faithful to God and merciful to everyone ,loving all mankind, patiently enduring any evil. During one night with good weather, George, as was his named then, was glancing over his fields. It was a clear starlit night and in the clear sky above Crete, he saw figures moving about. He wondered if they were people, and possibly thieves. They moved about very quietly in his threshing floor, systematically stealing, by filling sacks with grain and carrying them out. What did Myron due about this? With his own hands, he helped them to load the grain and carry it out. Lifting sacks upon their shoulders, he said: "This I advise you; go, but don’t steal again." These and many other similar things caused the people to acclaim him, as their Priest and eventually as their bishop!


Observing the action of the thieves, it is important to note that the provision of ownership is inborn and entrenched deeply in men. Ownership allows a family to be supported, alms to be given, and children to be nourished. Family life means I have a house to live in with a roof overhead, and this binds together our name and family. For this reason thievery is forbidden by both divine and secular law, for it strikes at the very root of society, the family and its possessions.


But St. Myron rising above everything, then assisted them in bearing and loading the goods that they were stealing from him, while warning them that they should not steal another man’s goods. We can see in this action of the saint, his goodness and forbearance, and concern for the salvation , especially to those who unjustly treat him.


The Saint was adorned with godly piety and he married in early manhood. Being a farmer, he showed by means of earned revenues and proceeds from gathering crops, his great love and generosity to those who were poor and in need. The more he increased in his generosity, the more God blessed him and multiplied his harvest. His love for God and man was supreme and was the center of his life.


When he spoke to the thieves telling them not to steal, he also said: "Do not reveal to anyone what has happened here, lest I should lose my reward of alms and forbearance."


Myron as his virtue shone before all was ordained as a Priest of the Church of God. After the persecution of the Church had ceased he was ordained as Bishop. He became a Bishop of Gortyna in Crete. He performed many miracles and wonderful works. He drove away a dragon which brought much fright injuring inhabitants. When the River Triton began to overflow flooding the area, he calmed it and it receded doing no harm. He accomplished this by sending some men ahead to the river with his episcopal staff, and when they plugged it into the edge of the water, which became calm, and when the staff was removed the waters returned to their agitated state. 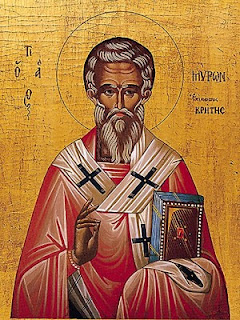 Saint Myron lived a sacred life and was sanctified by God in all his works, for he loved God first, always celebrating with great joy the feasts of the Holy Martyrs. At the age of 100 he was translated from earth to heaven and eternal life.


It is certain, that if we live for this world alone, when we die and we will not only lose this world, but also eternal life in the world to come. Instead we will be classified with the enemies of Christ and cast into outer darkness without hope, and suffer eternal torment. It is a fearful thing to waste this temporarily life which the Lord has loaned to us, that we may struggle to become holy and be sanctified in body, soul and spirit. Addressing all the Christians of the city of Corinth, St. Paul says in his salutation: "to them that are sanctified in Christ Jesus, called to be saints, with all that in every place call upon the name of Jesus our Lord, both theirs and ours, Grace be unto you and peace from God our Father, and from the Lord Jesus Christ" (1 Cor. 1:2-3).


It is necessary to develop meekness and humility and acquire peace and love. In order to do this, we need to develop decent and holy habits, such as morning and evening prayers; keeping the prescribed fasts, including fasting on Wednesday in remembrance of the betrayal of Christ, and on Friday in remembrance of Christ’s crucifixion. We should celebrate the Feast days, faithfully attending church services, preparing for Holy Communion through fasting and preparation prayers so that we may approach the Body and Blood of Christ with fear of God, faith, and love. Thanksgiving prayers after communion should be offered that we may joyfully give thanks to the Lord for his Holy Gifts. In doing these things, we can anticipate entering the firm and beautiful path of sanctification which leads to eternal life, where happiness and great exultation becomes our constant companion both in this present world, for our hope is built on a firm rock, for eternal life begins here in the  present world.


God is holy and in order to live with Him, we must also become holy, then we will behold Him in this present world as did so many Saints and Martyrs in this world. St. Stephen the first Martyr who was becoming a sacrifice to Christ, for he was being was being stoned by the Jews, and he cried out to them: "Behold, I see the heavens opened up, and the Son of man standing on the right hand side of God!" (Acts 7:56). This rendered the stones cast at him, not only harmless but a great blessing preparing his passage into the eternal Kingdom of God.

No words can describe how greatly we will all be blessed, upon leaving this world if we humbly anticipate hearing the sweet words of our Lord: "Come you blessed of my Father, enter the kingdom prepared for you."