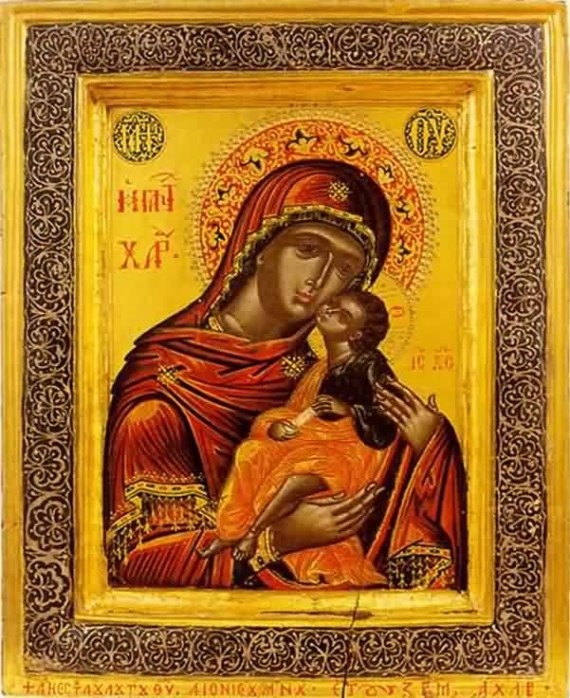 Supremely exalted by the Most High God, filled with divine grace, adorned with her rare and extreme beauty of soul and perfection of virtue, who can be worthy to offer proper praise and exaltation to the greatest creature in the of earth and heaven.  The Archangel Gabriel was sent unto a city of Galilee, named Nazareth to the virgin espoused to a man whose name is Joseph, of the house of David, and the Virgin’s name was Mary. And the Angel came in unto her, and said, Rejoice “Full of Grace” (her new name) (apparent in Greek a single word, keharitomeni).  The Angel said:  “Rejoice Full of Grace; the Lord is with you; blessed are you among women.

And when she saw him, she was troubled at his saying, and cast in her mind what manner of salutation this should be. And the Angel said to her: Fear nor Mary, for you have found grace with God. And behold you shall conceive in your womb, and bring forth a son, and shall call His name JESUS. He shall be great and shall be called the Son of the Highest; and the Lord God shall give to Him the throne of His father David, and he shall reign over the house of Jacob for ever, and of His kingdom there shall be no end.  Then said Mary unto the angel, How shall this be seeing I do not know a man?  The Angel answered saying: “The Holy Spirit shall come upon you and the power of the Most High shall overshadow you’; therefore that holy thing which shall be born of you shall be called the Son of God. And behold, your cousin Elizabeth has also conceived a son in her old age, and this is the sixth month with her who was called barren. For with God nothing is impossible; And Mary said, Behold the handmaiden of the Lord; be it unto me according to your word. And the Angel departed from her.”  Luke 1:26-48)

God filled with his divine grace the humble and pure Mary and from the entire human race, selected her to  lead us all to salvation and everlasting life in the kingdom of heaven. She expresses her role perfectly in her conversation with Elizabeth.  “And Mary arose in those days and went to the hill country with haste into a city of Juda, and entered the house of Zacharias and greeted Elizabeth. And it happened that when Elizabeth heard the greeting of Mary the babe leaped in her womb; and Elizabeth was filled with Holy Spirit and she spoke out with a loud voice and said. Blessed are you among women and blessed is the fruit of your womb. And whence is this to me, that the mother of my Lord should come to me?  For, Lo, as soon as the voice of your greeting sounded in mine ears, the babe leaped in my womb for joy.  And blessed is she that believed; for there shall be a performance of those things which were told her from the Lord.”

“And Mary said, My soul does magnify the Lord, and my spirit has rejoiced in God my Savior. For He has regarded the humility of His handmaiden, for behold henceforth all generations shall call me blessed. For He that is mighty has done great things; and holy is His name, And His mercy is upon those who fear Him from generation to generation. He has shown strength with His arm; He has scattered the proud in the imagination of their hearts. He has put down the mighty from their thrones, and exalted the humble.  He has filled the hungry with good things and the rich He has sent empty away. He has helped His servant Israel, in remembrance of His mercy, as He spoke to our fathers, to Abraham, and to his posterity for ever. And Mary returned to her own house” (Luke 1:46-56).

The Theotokos was a child of promise, and her parents dedicated her to God. She was placed in the temple in the holy of holies to be educated and fed by the angels. Her ascetic life, her fasting, her dedication and prayer were filled with the grace of God. When she reached the time of leaving the temple, she was espoused to Joseph who cared for and protected her.  Dedicated to god by her parents, Joachim and Anna, she grew into the most beautiful woman that ever lived, full of grace!

St Mark of Ephesus in one of his odes says: “For you were dead and are risen again, as the Lord’s Mother, to the assurance of the last resurrection whereunto we hope . . . The Mother of Life welcomes death. And having been put into the tomb, she arises for ever gloriously on the third day, reigning with her Son, entreating the forgiveness of our faults.”

To those who fail to honor the Theotokos and Ever-Virgin Mary, some being influenced by Protestants say that the Bible does not support Orthodox glorification of the Queen of Heaven and Earth, we offer the following.  The glorification and exaltation of the Theotokos is completely supported by Holy Scripture.  Gabriel first exalts her calling he Full of Grace.  Elizabeth pronounces her blessed among women, and the Theotokos prophesies that: “Henceforth all generation shall call me blessed.”  “In the mouth of two or three witnesses shall everything be established.”

O you Apostles from afar,
Be gathered together
And bury my body in Gethsemane,
And you my Son and my God,
Receive now my spirit.